Ten Days of Awe: The Key to Unlocking Moses’ Final Prayer for Redemption 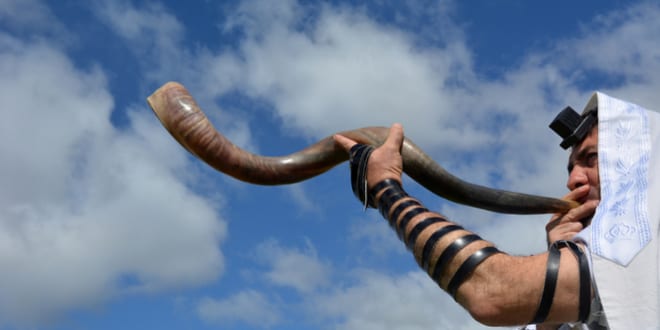 A rabbi’s life ambition to see the redemption has led him to compose a prayer that is now being read around the world and to establish a charity organization that is opening the gates of heaven.

Rabbi Aryeh Weingarten’s yearning for redemption that began when he was a young boy culminated in him composing a prayer to bring the redemption.

“We learn from the sages that Moses’ prayer to enter the land of Israel was denied but if he had prayed one more time, he would have been allowed,” Rabbi Weingarten said. “But God forbade Moses from praying and entering the land and the redemption would have been completed. That prayer was saved in order to bring the final redemption. I believe that it is now time to start praying Moses’ final prayer.”

Rabbi Weingarten’s prayer for redemption has been copied one million times and is now found in prayer books around the world.

About 25 years ago, Rabbi Weingarten felt a need to organize a prayer group in his community of Beitar.

Normally, Jews are very particular, choosing to pray in a homogenous community that shares customs and style of prayer. In an organic and natural manner, the minyan (prayer quorum) he organized attracted a mixed crowd with many people coming from other communities. The small group grew to almost one hundred regular attendees with one trait in common: a desire to pray for the good of all mankind.

Beitar is located in Judea, an area the Obama administration identified as the obstacle to their “peace agenda.” The minyan began to pray for a seemingly impossible solution to the political entity they saw as the obstacle preventing them from living peacefully in the land God promised them. When Donald Trump’s campaign resulted in an upset victory, they understood that through the power of prayer, a redemption similar to Cyrus ascending the throne in Persia was in the works.

“The Chasidic masters teach that as long as there is one small group of people praying for the redemption and greeting the Sabbath in joy, then miracles are absolutely possible,” Rabbi Weingarten said. “If you couple prayer with acts of charity, results are all but guaranteed.”

As per the spiritual guidebook, Rabbi Weingarten’s prayers for prayer led him 15 years ago to found Karmey Chesed, an organization that helps poor families in Israel with charitable donations, food, and, in an innovative program, provides them with second-hand donated appliances.

But Rabbi Weingarten does not simply collect and distribute cash. Every family that he cares for becomes part of a prayer list. One case in which prayer was an essential element was the Smadar family. In 2002,  55-year-old Haim Smadar was working as a security guard at a supermarket in Jerusalem. Smadar, originally from Tunis and a native Arabic-speaker, sensed something when an 18-year-old Arab woman entered. He physically confronted the woman and wrestled her out of the store. She detonated an explosive vest at the entrance to the store.  His quick reaction prevented an enormous tragedy but Smadar and one other person in the market were killed by the suicide bomber.

The family derived great consolation that their father was killed saving others but that did not help them with their finances. The bank was demanding 71,000 NIS ($18,600) to cover their debts. They turned to Rabbi Weingarten who immediately entered their names on the prayer list. The next step was to speak to the people behind the numbers; the bankers themselves.

“In issues concerning your fellow man, a face-to-face meeting helps with the prayers,” Rabbi Weingarten explained. “When I looked them in the eyes and told them the story, their hearts opened up. It became a sort of prayer.”

They were sympathetic and reduced the debt to 15,000 NIS ($4,000) on the condition it be paid off in two-weeks time. Rabbi Weingarten was overjoyed but even that sum was beyond what he was able to provide.

“We are currently in the ten-day period between Rosh Hashanna and Yom Kippur. Jews are praying intensely but if they want their prayers to materialize, they need to accompany their prayers with visible acts of kindness.”

Go to their website to connect with Karmey Chesed