Honoring the Aborigines Whose Cavalry Charge Opened Up Palestine

Home » Honoring the Aborigines Whose Cavalry Charge Opened Up Palestine 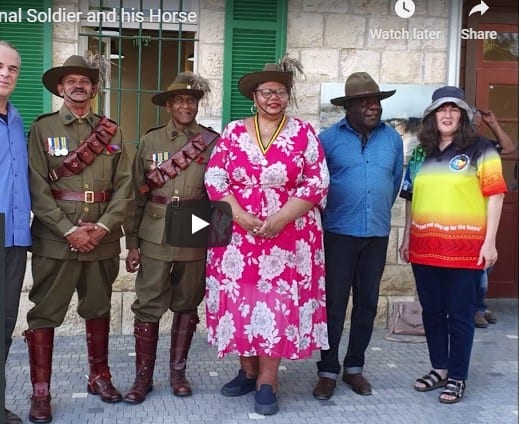 A statue was dedicated at Tzemach on the southern tip of the Kineret (Sea of Galilee) last week commemorating a unique cavalry charge that took place more than one hundred years ago, underscoring how Australians and Aborigines played a key role in preparing the way for modern Israel.

On September 25, 1918,  a regiment and two squadrons of the Australian 4th Light Horse Brigade attacked German and Ottoman forces holding a garrison at Tzemach. The site was key, commanding a train station and was the center of the rear-guard line of the enemy.  German General Otto Liman von Sanders, commander of the Yildirim Army Group, ordered the commander, a German officer to hold the town to the last man.

The cavalry charge was carried out over unfamiliar ground under the cover of darkness, a tactic that was so dangerous it had never been attempted before. But an open field of 2.5 miles with no cover surrounding the town left little choice. Heavy machine gun and rifle fire led to nearly 100 horse casualties, half their total force. After the cavalry charge, the soldiers engaged in close-quarter fighting using bayonets and swords to fight from room to room. At one point, the Australian attackers saw white flags being waved in the windows of some of the garrison buildings but when they approached, they were attacked by machine guns and grenades. After two hours of fierce battle, the town was captured. Approximately 100 Germans and Ottomans were killed.  The light horsemen suffered 17 killed and 60 wounded with one man missing and 77 horses killed, the 11th Light Horse Regiment lost two captains, one lieutenant and 11 other ranks killed, while four officers and 25 other ranks were wounded.

The victory opened the way for the cavalry pursuit to Damascus, which was captured on 1 October.

Last Thursday, a life-size sculpture, ‘The Aborigine and His Horse,’ was unveiled at Tzemach by Mark Pollard, grandson of Trooper Jack Pollard, of the 11th LHR. The Statue was designed by Australian artist, Jennifer Marshall and depicts an Australian Aboriginal Trooper Jack Pollard of the 11th Light Horse Regiment . The statue commemorates the role the Aborigine members of the Australian and New Zealand Army Corps (ANZAC) forces played in freeing Palestine from the Ottoman Empire. The statue depicts an Aboriginal soldier kneeling over the grave of a comrade, Bible in hand.

The statue underscores the rarely heralded role the Aboriginals played in the war, frequently fighting shoulder-to-shoulder with white soldiers. Historians estimate that as many as 1,000 of the approximately 4,500 Australian soldiers who fought in Palestine in WWI were Aboriginal. The 20th reinforcement contingent for the 11th Light Horse Regiment were nearly all Aboriginal and became known as the ‘Queensland Black Watch’. Unfortunately, the Aborigine soldiers were mistreated when they returned from the war and were even denied the right to vote.

In 2017, a reenactment was held commemorating the 100th anniversary of the ANZAC cavalry charge that captured Beersheba. It is important to note that while the ANZAC cavalry was charging into the heavily fortified desert city, Lord Balfour was composing his eponymous declaration.

“Had the Ottoman rule in Palestine and Syria not been overthrown by the Australians and the New Zealanders, the Balfour Declaration would have been empty words,” the Australian premiere said at the event.