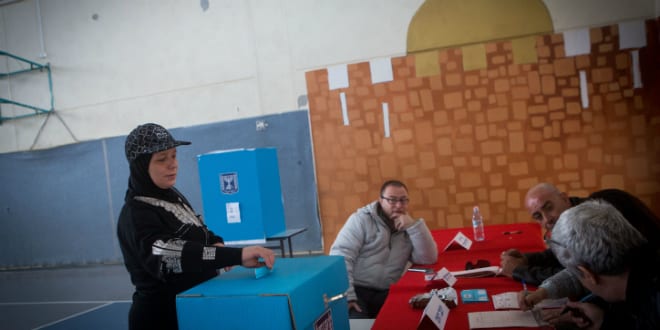 In a strange turn of events that makes Israel’s recent election season (the second this year) even more unusual, the Israeli Arab “Joint List,” recommended the head of the Israeli nationalist Blue and White party to become the next Prime Minister.

The Joint List is an alliance of four Arab parties. These include groups with unique Islamic, Arab nationalist, and communist leanings. One thing they have in common is their hatred of Prime Minister Netanyahu, and the rejection of the right of Israel to exist as the nation state of the Jewish people.

Following the election, they have become unexpected potential collective power brokers. While the outcome of the final election is still inconclusive, one thing that is clear is that the Joint list increased their representation in the Knesset by 30%, from 10 to 13 seats. This was driven largely by Israeli Arab voter participation also increasing by some 20%.

The Joint List endorsement of former Chief of Staff, General Benny Gantz marks the first time in 27 years that any Arab party backed a mainstream Zionist politician for Prime Minister. The last time this happened was in 1992, when they supported Prime Minister Yitzhak Rabin who campaigned heavily on making peace with the Palestinian Authority.

As much as the Joint List is exerting its influence, their move is primarily about unseating incumbent Prime Minister Netanyahu. Joint List leader and Knesset member (MK) Ayman Odeh stated “We have seen the most difficult election since 1948 in terms of the incitement against Israel’s Arab citizens. We have been turned into a group that is not legitimate in Israeli politics. If we are being pushed out, we will take our rightful place. For us, the most important thing is to remove Benjamin Netanyahu from power.”

Joint List MK Ahmad Tibi underscored that the decision was made despite reservations about supporting Gantz, the former IDF chief of staff who directed the 2014 anti-terrorist Gaza war. “Benny Gantz is not our cup of tea. We have a lot of criticism of him, specifically regarding Gaza. But when we told our public that we would do all we can to remove Netanyahu from power, we realized that we would need to take a bold step.”

If anyone questioned whether Odeh, Tibi and the rest of the Joint List had even a momentary case of pro-Israel nationalism in their decision, Tibi made it clear. “For a decade, we have been a minority hounded by Prime Minister Netanyahu. Today, we have turned into a minority giving pursuit. We have hounded Benjamin Netanyahu to the point that we have decided to remove him from political life. I hope that the recommendation of the Joint List will bring about the political demise of the man who has incited against the Arab public more than any other prime minister in Israeli history. Today we have made the decision to take an active role in getting rid of him.”

As Prime Minister, Netanyahu has borne the brunt of the Israeli Arab community for public comments and behaviors that are seen as an affront to the Arabs. However, no love is lost on Yisrael Beiteinu (Israel Our Home) Party leader Avigdor Liberman. Liberman has referred to Joint List Arab party leaders as terrorists, enemies, and this week said that they should be represented in a parliament in Ramallah, not Jerusalem.

Being an alliance of different parties, not all Joint List members agreed to support Gantz. The Balad party issued a statement rejecting “General Benny Gantz” (due to his) “Zionist ideology, his right-wing positions that are not much different from the Likud and his bloody and aggressive military history.” The statement continued that “he intends to establish a national unity government with the participation of (Avigdor) Liberman and the Likud” and due to Blue and White’s rejection of the demands made by the Joint List in order to endorse Gantz.

Balad was formed as a separate party in 1995. Following the 2006 Lebanon War, three leaders visited Syria and expressed open support for Hezbollah. As a result, party leader Azmi Bishara was charged with supporting a terror group and treason. He resigned from the Knesset in 2007 and has not returned to Israel to face the charges or defend himself.

Before the election, the Joint List issued a series of demands as conditions for its’ supporting the Blue and White party. These included creating a commission to study the status of unrecognized (illegal) Arab villages, ceasing home demolitions in these unrecognized villages, establishing new (legal) Arab cities and hospitals in the Arab sector, a formal decision to battle violence within the Arab communities, canceling the nation-state law which affirms Israel as the nation-state of the Jewish people, and initiating a peace process with the Palestinian Authority. For many Israelis, some of these demands are legitimate. But for most, placing the onus on Israel for making peace when there is no Palestinian Arab partner willing to sit with Israel, that makes the collective demands not only impossible, but irrational.

As strange as these turn of events has been, and the outcome yet to be determined, no less strange was the invoking of Psalm 118 by Odeh, an Arab Moslem, in celebrating their newfound influence. Widely broadcast on national media Odeh quoted the original Hebrew, “The stone the builders rejected has become the cornerstone.” Considering the Joint List parties’ rejection of Israel as a Jewish state, it does not seem likely that Odeh’s biblical reference was out of respect, or what’s otherwise seen as a sense of coexistence with many Israeli Arabs influenced by Jewish tradition. Rather than this being an affirmation of and reverence for God, it’s more likely a complete sense of irreverent cynical godlessness.

However, given the divisiveness that’s marked the campaign and election both within and about the Israeli Arab community, it’s hard to imagine the former.

Too many factors remain in play to project the outcome of the election as to who will be successful in forming a coalition and becoming the next prime minister. One thing we do know however is that regardless of the outcome and without any lack of sincerity, Psalm 118 reminds us “Give thanks to the Lord because He is good, for His kindness is eternal.”