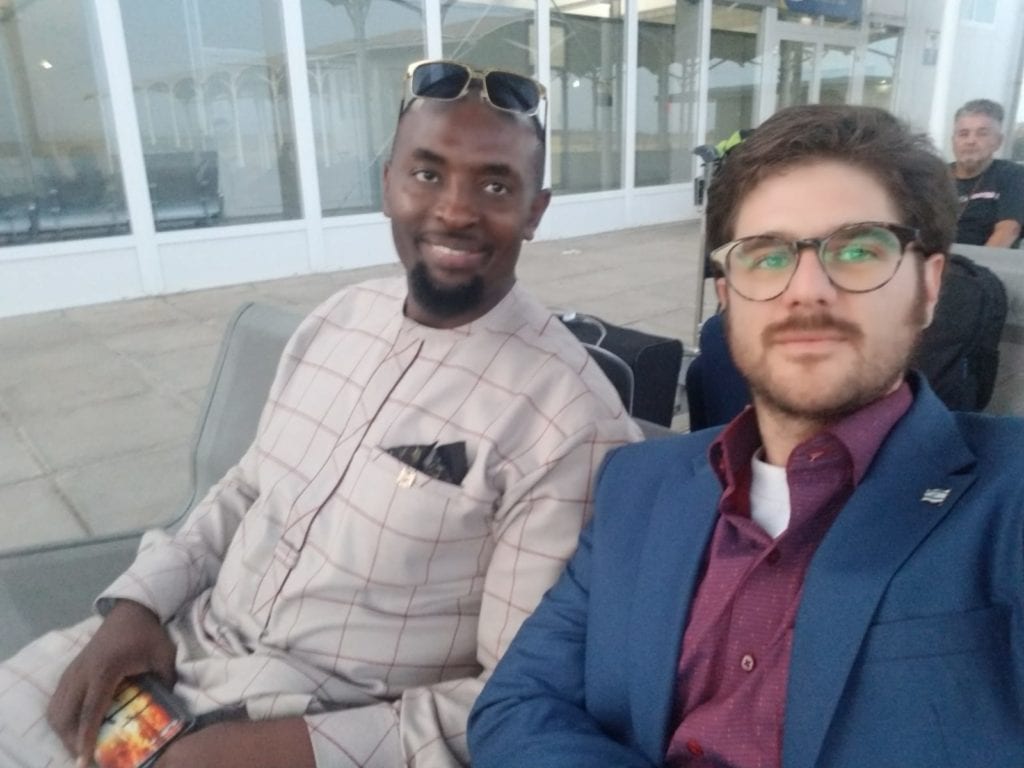 Aaron Katsof never intended to spend 18 months rescuing a Jewish Ethiopian family and bringing them home to Israel, but God sent him on a mission to do exactly that. His success story includes miraculous help that came through the hands of God-fearing Christians and Jews that he connected with along the way.

His story, told in full in his forthcoming book, Operation Left Behind, details miracle after miracle he witnessed along the dangerous journey through South Sudan, Uganda, Kenya, Ethiopia and, ultimately, to Israel.

Katsof has been called an Indiana Jones, but the story he most wants people to know is how he was assisted on his Godly quest.

Katsof is an Orthodox Jew, raised in the US and living in the Benjamin region of Israel since 2004. He holds the rank of  Major in the Israel Defense Forces and serves 30 to 40 days a year in reserve duty.

When he’s not rescuing Jews from Africa, he runs Heart of Israel, an organization he founded in 2017 to connect people from all over the world to the Biblical Heartland of Israel, including Judea, Samaria, the Jordan Valley and the Benjamin region.

Katsof told Breaking Israel News, “Every week, I send a human interest story from the Heart of Israel to over 40,00 people.” Ninety percent of the donors to Heart of Israel are Christians who help him complete projects in Israel’s Biblical Heartland.

Along with his organization’s online shop, Katsof speaks  in churches and synagogues across the US about the importance of supporting the Jewish residents of Biblical locations throughout Israel. His talks are often followed by an Israel Fair, where people can buy products created in Israel.

As a result of this work, Katsof is no stranger to Christian supporters of Israel, but what he experienced in Africa surpassed anything he had ever known before.

His story began in 2017, when he met an Ethiopian Jewish woman who had come to Israel with her whole village in 1999. Katsof was puzzled by the date of her aliyah, since the majority of Ethiopian Jews came to Israel during Operation Moses in 1984-85 and Operation Solomon in 1991.

“What she told me is what really moved me,” he explained. “She lived in an isolated village. When Operation Moses came around, they didn’t know what happened. They were that isolated. They didn’t find out until it was too late.”

The Israeli government was initially skeptical about the claim of his friend’s village leaders that they missed the news about Operation Moses. According to Katsof, “some crazy American came to the village and made a 60-minute video” to raise awareness of their existence. That video is what convinced Israel to finally bring the population of his friend’s village home to Israel.

A year later, Katsof understood that there were other Jews, scattered all over Ethiopia, who had been left behind during the big airlifts. Imitating the exact formula of the man whose video helped get his friend’s village rescued, he went to Ethiopia.

Katsof describes himself as a simple person with a simple idea. “I’ll go and do a video. It wasn’t even an original idea! I took a week off of work and brought a videographer. My  intention was only to raise awareness.”

Once there, he heard a lot of personal stories. For example, one family, a single mother with four children and a grandchild, had permission to come but no money for flights. From his donor base, Katsof raised money to bring them to Israel.

“For me, it was the most fulfilling thing. We’re saving lives.” He quoted a Jewish prayer that asks God to redeem the entirety of the Nation of Israel, as promised in Ezekiel. The Jews of Ethiopia are from the Tribe of Dan, one of the Ten Lost Tribes, associated with the House of Israel.

“All of a sudden, I’m taking part in these prophecies,” he said, quoting the Book of Isaiah.


“I will say to the North, “Give back!” And to the South, “Do not withhold! Bring My sons from afar, And My daughters from the end of the earth— Isaiah 43:6

“This is where I got sucked into the story,” he related. “I met a boy in the synagogue. He’s darker than everyone else. He’s from Sudan, not Ethiopia.

“It’s not by chance. I felt this is important. I had no idea how much that meeting would change my life. From that meeting, I saved two sisters and their kids. If I hadn’t done it, it never would have happened.”

This boy’s mother, Tuwavith Berko, had been on her way to be rescued during Operation Moses in the mid-1980s. Speaking with her in Arabic, Katsof learned that she was caught and imprisoned in Sudan. She was 14 years old at the time.

The head of the prison took pity on her and paid to have her released, after which he married her. The couple had three children, including two daughters who were married off at the age of 12, as is the local custom. Berko had not seen either of her Jewish daughters in over a decade.

This story galvanized Katsof. He was determined “to do what I can do” to get Berko’s daughters (and their children) reunited with their mother and brother and, eventually, home to Israel.

What follows is an intricate tale of multiple border crossings (some illegal) through Uganda, Kenya and Ethiopia with inadequate travel documents, cancelled flights, black market currency, an arrest on charges of child trafficking and endless bureaucracy.

The details of the mission are overshadowed by the outpouring of assistance Katsof received from Christians who wanted to have a hand in the fulfillment of Biblical prophecy.

One example will serve to set the tone for what he experienced during his 18 month long quest. After Katsof’s arrest, Pastor Dennis, the spiritual leader of a large church near Nairobi, Kenya signed a bail document for a million Kenyan shillings (approximately US$10,000) and surrendered his personal ID to help Katsof get released from custody. The two had never met before. Katsof was baffled that a complete stranger would help in this way.

“I asked him, ‘Why are you doing this?’ He told me, “You’re a Jew and God said I will be blessed for helping you.”

“Pastor Dennis was with me for more than two weeks, day and night, helping me to go from office to office. I didn’t pay him a penny,” Katsof related.

When South Sudan didn’t want to let the Berko’s grandchildren go, Katsof was about to give up. It was Pastor Dennis who convinced the South Sudanese ambassador in Ethiopia to release the children, because they have Jewish roots.

Katsof was floored that this approach worked. And it worked brilliantly. The Ambassador, David Dang Kong said, “I know about the prophecies of Jeremiah and Isaiah. I know this! I read the Bible!”

He further asked, “Why aren’t you bringing all the families [with Jewish roots]? We know who they are. I’m going to help you. Your country [Israel] was the first one who gave us guns and the first ones to support us when we were fighting the Muslims.”

South Sudan is a Christian country, not to be confused with Sudan, which is a predominently Muslim country.  South Sudan became independent from Sudan in July 2011, after a lengthy civil war.

Making the Jewish connection explicit also worked with the father of some of Berko’s grandchildren. Initially advised not to release his children, he ultimately agreed they could go with Katsof. “At the end of the day, I’m also Christian and if God chose to save my children and to let my children live in the Chosen Land, I feel chosen.”

Katsof was also aided by another pastor he had met briefly in Kenya. Pastor Fermo was able to provide critical travel documents for which he paid from his own pocket. In exchange, he asked only that Katsof “bless me in the name of the God of your forefathers, Abraham, Isaac and Jacob.”

Pastor Fermo strengthened Katsof’s resolve when things did not look promising by telling him, “History tells us that it had been [challenging] like that with the Jewish people, but in the end their God always will [show] himself strong on behalf of His chosen people. I am convinced that God is going to handle this case.”

These are just a few examples of the never-ending saga of bureaucracy and how, each time he was at what felt like the end of the line, another Christian would step forward to assist, wanting only to participate in the prophetic return of the Jewish people to Israel.

“My whole life was worth it just for that moment. For 18 months, going from bump to bump, meeting Christian pastors from all over the world who put their money and energy just to have these people land in Israel. They all wanted to be part of the prophecy of returning Jews.

“If God didn’t promise that the tribes would return, there is no way that this would have happened,” he concluded.

Katsof is currently on a speaking tour, with upcoming trips to North America planned through the end of 2019. He’s available to speak to church groups, sharing the full story of the miracles he witnessed, supplemented by pictures and videos. Contact him at akotsof@gmail.com.