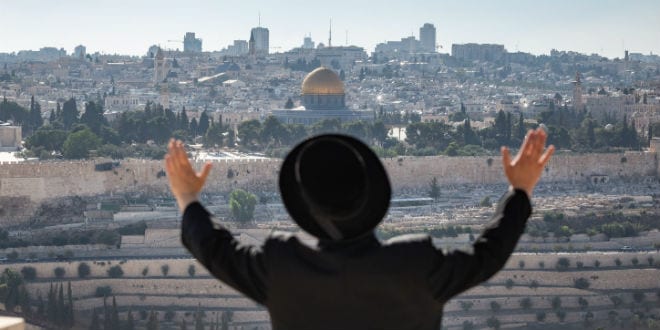 In an informal interview in his Jerusalem home, Jewish scholar and international speaker Rabbi Mendel Kessin, who believes that the world is teetering on the edge of redemption, explained what has to happen politically in order to serve the spiritual purpose of advancing redemption.

“Something [with this election] is going to happen out of nowhere that’s going to be stunning, that nobody expects. In order for the Jews to repent, to get close to God, to get close to their Torah, this government must be removed.” In his words, Prime Minister Benjamin Netanyahu “must be deposed.”

At press time, the fate of the Israeli government is still very unclear. The country is deeply divided and no obvious winner has yet emerged from the second round of voting for the 22nd Knesset.

In order to bring the Jewish people closer to Torah and prepare them to receive the elevated Torah of Messiah, Kessin predicted that the final outcome of this week’s election will be that Israeli President Reuven Rivlin will give the Likud party the option to form a coalition, but without Netanyahu at its head.

“Basically, Bibi has to be deposed. God is going to get rid of him politically,” Kessin asserted.

Kessin does not believe that the Messiah will immediately replace Netanyahu. “You need a transition guy. The person I have in mind is on the political scene. His name is Gideon Sa’ar.”

Sa’ar was a Member of Knesset from 2003-2014 and was again elected to the 21st Knesset in April of this year. Holding the sixth spot on the Likud party list, he would have to be advanced over four other Likud members for Kessin’s prediction to come true.

It wouldn’t be the first time Kessin backed a dark horse candidate. He correctly predicted that Donald Trump would win the 2016 US presidential election back when the Republican party was still flush with seasoned political candidates. Then, as now, he bases his thinking on spiritual ideas rather than political considerations.

In a public lecture delivered in Jerusalem just before the election, Kessin said, “The issue is not the Israeli elections. The issue is [that] it is time to remove the influence of people who have nothing to do with furthering God’s Torah. The Jewish people must be prepared and must be elevated in order to begin the process of redemption,” he claimed.

“It’s not only an issue in Israel. It’s the same thing in America – those Democrats that want to destroy Trump. I’ve mentioned many times who [Trump] is. He’s an Edomite – a messianic figure of Edom. His job is to assist the Jewish people to do the tikkun (to spiritually rectify the world).
Which he’s doing! Which is amazing. He doesn’t even know who he is and he’s still doing it.

“We’re probably entering the next stage where all the Jewish settlements become part of Israel. That’s the next thing. See what God is doing? Slowly He is restoring the Jews,” explained Kessin.

In essence, Kessin is claiming that the Jewish State needs a transition leader who will help the Jews return to Torah, in preparation for the arrival of the Messiah and the full redemption. And that leader cannot be Prime Minister Netanyahu.

What kind of  leader is necessary today? According to Kessin, “It has to be someone who can present himself as friendly and of assistance to spirituality. I’m not looking at this politically.

“Redemption is the greatest event the entire creation has ever seen. Once it starts, it’s unstoppable and irrevocable.

“People have no idea what Moshiach (Messiah) does. What he does is change reality. He takes away the fog, where everybody sees Ain Od Milvado – besides God, there is nothing else. We can’t even comprehend what that means.”

For the earth shall be filled With awe for the glory of Hashem As water covers the sea. (Habakkuk 2:14)

“What’s happening now is there is an unbelievable fight. If you were in Heaven, you would see the battle. The Satan is desperate because his days are numbered.”

In Jewish thought, the Satan is a spiritual presence that God created with the specific mission of provoking people to sin. The Satan is an instrument of God, fully subservient to Him. Rabbi Kessin calls the Satan, “a spiritual entity that has been the greatest enemy of mankind.”

“We’re not look here at elections and coalitions,” Kessin stated. “Israel has to be saved first spiritually.

“Maybe that’s why these elections are in such turmoil,” he conjectured.