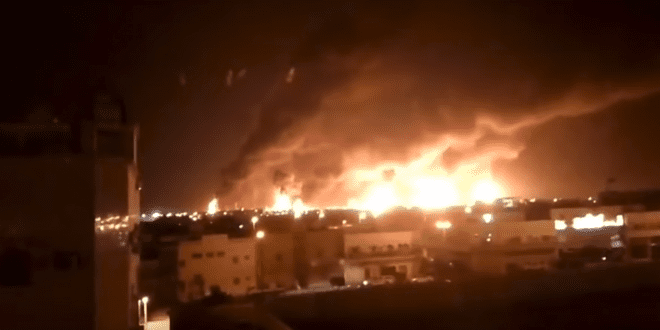 Yemen’s Iran-backed Houthi rebels claimed responsibility for the coordinated drone attacks against Saudi Aramco oil facilities in Abqaiq and Khurais. A Saudi-led coalition has been fighting the Houthis in Yemen since 2015 to restore the internationally recognized Yemeni government.

According to the pro-Houthi Saba news agency, “intelligence cooperation from honorable people inside Saudi Arabia” enabled the surprise attack.

According to the Saudi oil minister, crude oil production had dropped by 5.7 million barrels a day for at least the next 48 hours as a result of the attacks.

Saudi Crown Prince Mohammad bin Salman received a call from U.S. President Donald Trump on Saturday in which Trump reiterated America’s readiness to help defend the kingdom, and noted the negative effects the attack would have on the U.S. and world economy, according to the Saudi Press Agency.

U.S. Secretary of State Mike Pompeo accused Iran of being behind the attacks, saying there was “no evidence” Yemen was behind what he called “an unprecedented attack on the world’s energy supply.”

Tehran is behind nearly 100 attacks on Saudi Arabia while Rouhani and Zarif pretend to engage in diplomacy. Amid all the calls for de-escalation, Iran has now launched an unprecedented attack on the world’s energy supply. There is no evidence the attacks came from Yemen.

Having failed at “max pressure”, @SecPompeo‘s turning to “max deceit”

US & its clients are stuck in Yemen because of illusion that weapon superiority will lead to military victory.

Meanwhile, an Iranian Islamic Revolutionary Guard Corps commander said that all U.S. military bases and vessels in the region are within the reach of Iranian missiles, Iran’s Tasnim News Agency reported on Sunday.

“Everybody should know that all American bases and their vessels in a distance of up to [1200 miles from Iran’s borders] are within the range of our missiles,” said Amirali Hajizadeh, the head of the IRGC Aerospace Force.