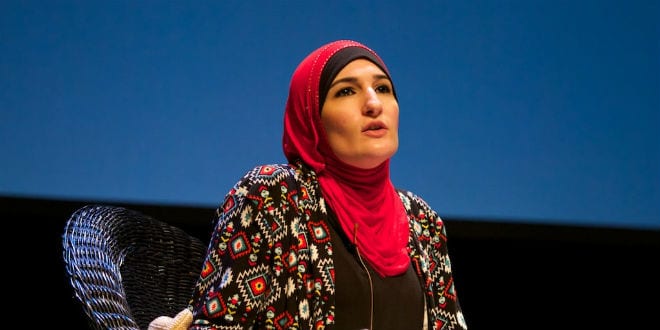 Will Bernie Sanders be America’s first Jewish president? That’s up to Democratic primary voters and then the rest of the electorate should he receive his party’s nomination. But the Vermont senator’s choice of a virulent opponent of Israel and a close ally of some of the country’s leading anti-Semites as an official campaign surrogate renders the possibility of his achieving that distinction more an ironic twist that ought to upset Jews more than cheer them.

Even more important, his very public embrace of Linda Sarsour speaks volumes about the battle over the future of the Democratic Party about which friends of Israel and opponents of anti-Semitism must regard with trepidation.

The announcement of Sarsour’s designation as one of his surrogates on the septuagenarian Socialist’s Twitter account left little doubt that Sanders believes the Women’s March leader is an asset to his campaign. He is in a fierce competition with Sen. Elizabeth Warren and a number of other Democratic contenders for the votes of the party’s left-wing base, which united behind him in opposition to Hillary Clinton four years ago. So it says something important about the tone of the nomination battle that Sanders and his team thinks that Sarsour will help him more than her baggage will hurt him.

Sarsour, a Palestinian-American political activist who backed Sanders four years ago, became a celebrity in the months after President Donald Trump’s election as one of the organizers of the Women’s March that mobilized the “resistance” to the new administration even before it took office. That proved to be a potent platform for her. However, from the very start of the group’s spectacular launch—with a massive anti-Trump rally in Washington, D.C., the day after his inauguration—it was clear that anti-Semitism tainted the movement.

Some Jewish activists who were initially involved with the March have spoken about how the group’s leaders marginalized them and allowed what many had initially thought was a mainstream movement became quickly controlled by radicals. And the focus of those radicals wasn’t merely what they thought about the new president, but proved instead a hard-core opposition to Israel’s existence, coupled with an openness to being allied with anti-Semites like the Nation of Islam’s Louis Farrakhan.

Sarsour is a vocal advocate for the BDS movement, which is drenched into anti-Semitic invective. But unlike some of those who flirt with BDS, Sarsour isn’t coy about her objectives. She opposes the existence of a Jewish state, no matter where its borders might be drawn, and refers to all of Israeli territory as “occupied,” not just the West Bank.

Those who would deny rights to the Jews that they wouldn’t deny to others are engaging in a form of bias that is indistinguishable from anti-Semitism. But never has that been more obvious than with Sarsour, who has made a habit of personally attacking Jews who support Israel. She has made it clear that pro-Israel women are not welcome in the Women’s March or in any anti-Trump movement for that matter. She has attacked Jews, as well as non-Jewish women like Ayaan Hirsi Ali for her testimony about the plight of women in Muslim societies, in the most vulgar and vile terms imaginable.

Just as important, Sarsour is an ardent defender of March leaders like Tamika Mallory, who are open fans of a hatemonger like Farrakhan who is obsessed with attacking Jews.

Sarsour and her left-wing apologists on the Jewish left claim that she is misunderstood, pointing to gestures like her fundraising to help vandalized Jewish cemeteries even if it is unclear how much, if any, help she has ever actually given to such causes. They will repeat this line by citing her statement supporting Sanders, in which she spoke of her pride in helping elect a Jew and opposition to anti-Semitism.

Like many other who peddle intersectional ideology, Sarsour falsely asserts that the Palestinian war on Israel’s existence is morally equivalent to the struggle for civil rights in the United States. She extends her fight to those Jews who support Jewish rights and Zionism while claiming people of color and Arab Americans cannot be termed ant-Semites because of their minority status.  And, like fellow radical Israel-haters Reps. Ilhan Omar (D-Minn.) and Rashida Tlaib (D-Mich.), Sarsour poses as a victim of anti-Muslim bias from the right.

The activities and statements of both Mallory and Sarsour have done much to discredit the Women’s March among liberal Americans who may disdain Trump, but don’t want to be associated with anti-Semites. That’s what caused the last mass march led by the group to be boycotted by many Democrats.

Yet it is quite significant that Sanders is willing to bring Sarsour onto his team at a time when he is battling to overtake both Warren and former Vice President Joe Biden as the Democratic race heats up.

Does Sanders think his Jewish origins give him a pass for employing someone who not only works for Israel’s destruction but has also done much to promote anti-Semitic invective?

Jewish or not, he and his trumpeting of Sarsour as a key member of his campaign—who would likely think herself entitled to a significant administration job if he won—makes history in a way that ought to make Jews shudder.

If Trump or any Republican were to use a white supremacist or any other variety of right-wing anti-Semite the way Sanders is using Sarsour, the cry of outrage from Democrats and the Jewish community would deafening. The same ought to be true in this case.

Even those who call themselves progressives should consider Sarsour’s presence in Sanders’s campaign to be a disgrace that he should retract and apologize for. If that doesn’t happen—and so far, there’s no sign it will—then that should disqualify him as a presidential candidate for anyone who cares about fighting anti-Semitism.