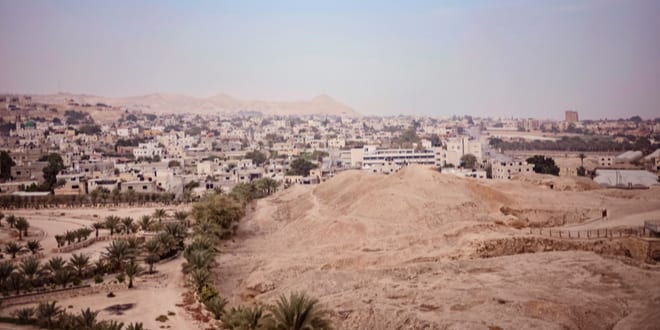 On Tuesday night, Prime Minister Benjamin Netanyahu promised to annex the Jordan Valley if he wins next week’s elections. Though many people may think of that section of Israel as hot and sparsely populated, those familiar with the Bible (like Netanyahu) immediately recognized the enormous significance of the region which contains the city of Jericho.

Netanyahu’s narrow coalition fell in March last year and early elections were called for in April. During his campaign, Netanyahu sought to attract right-wing voters by promising to annex Judea and Samaria. Though Likud, headed by Netanyahu, won the elections, they were unable to form a majority coalition and new elections were set to be held September 17. Many polls are putting the opposition led by the Blue and White Part ahead of Likud and is appears that Netanyahu is responding by becoming even more right-wing. This was seen on live television when he referred to the Jordan Valley as  “Israel’s eastern border.”

“Today, I announce my intention, after the establishment of a new government, to apply Israeli sovereignty to the Jordan Valley and the northern Dead Sea,” Netanyahu said in his speech.

Rather than leave this as a vague, open-ended campaign promise, Netanyahu said he would annex the region “immediately after the election if I receive a clear mandate to do so from you, the citizens of Israel.”

The largest city in the Jordan Valley is Jericho and though it is currently occupied by some 18,000 Arabs, it is believed to be one of the oldest inhabited cities in the world and the city with the oldest known protective wall in the world. Jericho is mentioned many times in the Bible, most notably as the first city conquered by Joshua in Israel. In addition to its role in the Bible in the time of Joshua and as the home of Elisha the Prophet, there are two ancient synagogues that attest to the historical Jewish presence in Jericho: the Shalom Al Yisrael Synagogue first built in the 6th century and still in use today and the Wadi Qelt Synagogue which dates from between 70 and 50 BCE and is one of the oldest synagogues ever found.

“In the Bible, we see that Jericho is the key to all of Israel, Rabbi Sudri told Breaking Israel News. “If you have the key in your hand, only then can you enter but after you do the entire land will be open in front of you. Opening up the land for the Moshiach ben David is, in fact, the main function of the Moshiach ben David as we saw in Yehoshua ben Nun who was the template for Moshiach ben Yosef.”

According to Jewish tradition, the Messianic era is a two-stage process beginning with Moshiach (Messiah) from the house of Joseph, a practical process that includes building up the land of Israel and the ingathering of the exiles. Moshiach from the house of David is a miraculous process culminating in the completion of the Third Temple and the resurrection of the dead.

“Contrary to what Netanyahu did, Yitzchak Rabin’s downfall began when he gave Yericho to the Arabs,” Rabbi Sudri said. “Though it may seem like an insignificant city on the edge of Israel, it is like the door to the house which does not seem to be part of the house but if you give the key to an enemy, the entire house falls.”

“Not only did Yehoshua conquer Yericho but as Moshiach ben Yosef, he married Rahav, a convert who was from Yericho. She gave birth to Jeremiah and many other of the great men of Israel.”

As noted in the Israel Bible, the first time Jerusalem is mentioned in the Bible is in response to Joshua conquering Jericho.

When King Adoni-zedek of Yerushalayim learned that Yehoshua had captured Ai and proscribed it, treating Ai and its king as he had treated Yericho and its king, and that, moreover, the people of Givon had come to terms with Yisrael and remained among them Joshua 10:1

The rabbi noted that the two cities seem quite different in many respects.

“Jerusalem is the heart of Israel and Jericho is on the edge,” Rabbi Sudri said. “Jerusalem, whose name means ‘complete’, is symbolized by the sun whereas Jericho’s name contains the word Yareach (moon). Though they are adjacent on a map, they are actually quite distant from each other with Jerusalem on a mountaintop and Jericho in the deepest part of the world.”

“But there is a strong connection between Yericho and the Temple in Jerusalem,” Rabbi Sudri said. “Jericho’s name comes from the word re’ach (smell) because the smell of the incense from the Temple could be smelled in Jericho.”

Netanyahu and the Bible

There is no doubt that Jericho’s Biblical significance is clear to the Prime Minister and his campaign took a distinctly Biblical turn last week when he became the first sitting prime minister to speak in Hebron. Netanyahu referred to the Biblical significance of Hebron when he said, “We all remember the victory call of Caleb son of Jephunneh who was loyal to Hebron  – Let us, by all means, go up!”

This was a reference to the verse in Numbers.

Kalev hushed the people before Moshe and said, “Let us, by all means, go up, and we shall gain possession of it, for we shall surely overcome it.” (Numbers 13:30)

In addition to its Biblical significance, the Jordan Valley has enormous strategic and national importance. With the Jordan River to the east, Bet Shean to the North, and the Dead Sea to the south, the valley covers 926 square miles or almost one-third of Judea and Samaria.

Rabbi Glick: Time for the Nations to Recognize All of Israel

“Jericho connects the miraculous life in the desert and the revelation of the Torah at Mount Sinai to the Land of Israel,” Rabbi Glick told Breaking Israel News. “Israel is where miracles took on natural manifestations, where the miraculous took on the appearance of the mundane. Jericho is the mediator where this change began to take hold.”

The first stage of the 1993 Oslo Accords was a partial Israeli withdrawal from Jericho and the transfer of some powers and responsibilities on civil matters to the interim Palestinian Authority. After this step was implemented, the negotiations stalled and the process ended.

“Since the Accords, redemption has made a U-turn and the nations now recognize Jerusalem as the heart of the Jewish People,” Rabbi Glick said. “Now is the beginning when the world can recognize our sovereignty over all of Eretz Yisrael (the land of Israel), especially the places that the Bible took place. This has to be true of Jericho which is specifically described as the first place we conquered after the Exodus as the entrance into the land.”

Jericho is Just the Beginning

“The Jordan Valley is a good start and we relate to this as the beginning of the road. The Prime Minister of Israel Benjamin Netanyahu is not the only one who recognizes the necessity of the move and is carrying it out, rather the other nations of the world with the American government at the helm will recognize the move, and will join the nation of Israel in his historic mission.

Following the Jordan Valley, it must be Gush Etzion’s turn next and afterward the rest of our homeland. That is the order of the day. There are many critics on the left of our political map and some believe the Prime Minister is only carrying this out for political gain. But we believe that Prime Minister Netanyahu is making history today!”

The Arabs responded immediately and in an extreme manner, displaying the importance they assign to the Jordan Valley.   PA Prime Minister Mohammed Shtayyeh announced on Monday that the PA may offer grants “to any Palestinian university graduate who is prepared to live in Jordan Valley areas and villages, and work with the residents there on production projects.”

Hamas took a decidedly more direct approach to show its disapproval. Later Tuesday night, Netanyahu was giving a speech in Ashdod when Red Alert sirens went off as rockets were fired from Gaza.

“The league regards these statements as undermining the chances of any progress in the peace process and will torpedo all its foundations,” the league said in a statement from Cairo.

History of the Jordan Valley and the Oslo Process

The Jordan Valley was illegally occupied by Jordan in the 1948 War of Independence. Israel conquered the region in the 1967 Six-Day War. Though conquering territory in a defensive war is recognized as valid by international law, UN Resolution 242 allowed for the fate of parts of Judea and Samaria to be determined by bilateral negotiations between Israel and the Palestinians.

It should be noted that last month, the PA announced their rejection of the Oslo Accords and, as a result, was beginning to build in Area C, approximately 60 percent of Judea and Samaria that were designated by the Oslo Accords as solely under Israeli administration. Estimates have claimed some 10,000 Palestinian construction projects are underway in Area C, many funded by European sources.