Our Man in Damascus

Home » Our Man in Damascus 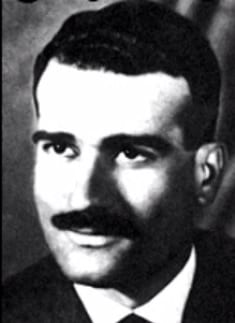 A few months ago, there was a slew of hopeful chatter in Israel that Eli Cohen would finally be coming home. This followed the return of remains of an Israeli soldier killed in battle in Lebanon in 1982 with help from Russia. The country couldn’t restrain its excitement at the repatriation of Zachary Baumol’s remains. Prayers were that Eli Cohen would be next. For as long as I can remember, Eli Cohen was a larger than life hero. Had his story ended differently we might never have known how much Israel is indebted to him. As one of Israel’s most famous Mossad agents, Cohen breached the highest level of Syrian political and military leadership assuming the identity of Syrian businessman Kamal Amin Ta’abet.

Under this alias, from 1961 until his exposure and execution in 1965, Cohen provided considerable details on the highest level of Syrian political and military matters. He breached Syria’s elite to such an extent that not only was he privy to high level secrets, but was even in consideration to be named the Syrian Deputy Minister of Defense.

Eli Cohen’s life and legend is recounted in a book, Our Man in Damascus, and movie by the same name. Now, Eli Cohen’s story is being told in the new Netflix series, “The Spy.” Spoiler alert, despite the drama of his life and alias, and the incredible achievements that are credited to Cohen, after he was caught and both the embarrassment and damage were so high, Cohen’s execution was done publicly and broadcast on Syrian TV. What were some of Cohen’s achievements that were so embarrassing to the Syrians? As one of, if not the only, civilians to receive private tours of military installations, including in the then Syrian controlled Golan Heights, the intelligence Cohen was able to deliver to Israel was unparalleled.

Cohen provided details of Syria’s plan to block the tributaries that provided fresh water to the Sea of Galilee and Jordan River, and about military outposts through the Golan, including tank traps which helped Israel map out its eventual capture of the Golan in 1967. Most dramatic, and still evident today, Cohen’s ingenuity made that task even easier. During one of his visits to the Golan, overlooking Israeli communities from the commanding strategic position above, he expressed concern for the well being of Syrian troops who had no shade on the barren mountainous terrain. Cohen suggested that the Syrians plant trees on the Golan near their fortifications and foxholes. With the trees as literal landmarks, Israel knew exactly where the Syrian troops and weapons were. In the 1967 Six Day War, two years after his death, when Israel launched a preemptive attack on the Syrian positions, both the intelligence Cohen provided, and the location of the trees enabled Israel to capture the Golan Heights in just two days. The trees still provide shelter and shade today over remains of former Syrian bunkers and positions, as if still under Cohen’s watchful eye.

What will become of the remains of what was once Syria under a hereditary Alawite Assad dictatorship remains to be seen after a decade-long multi front civil war. Earlier this year, US policy recognized Israel’s sovereignty of the Golan, as if there were an alternative or any rational ability to ever give Syria or any other Arab or Islamic regime that literal commanding and threatening position over Israeli communities in the Galilee. The fact that Israeli communities and the Druze minority now thrive peacefully throughout the Golan and northern Galilee is part of Eli Cohen’s legacy. The land is lush and home to many outstanding Israeli vineyards, orchards, a center of tourism and coexistence between Jews and Arabs, and even Israel’s only ski resort.

I think of Eli Cohen often. First, I travel a lot and my kids sometimes joke that my “work” is my cover as a Mossad agent. While that’s not true, and even if it were true I’d deny it, I think of Cohen’s sacrifice often, much more than “just” giving his life. For weeks or months on end, before any electronic communication that would allow him to stay in touch, Cohen left his wife and kids for his “job” of spying on Syria. He missed his children growing up and ultimately paid with his life. Knowing that their father is a hero may be some comfort, but its no replacement from not having their father to read to them, tuck them into bed, or be with them throughout their lives. In a word, Eli Cohen was selfless.

I hope Netflix portrays this with credibility and without moral equivalence. Cohen was heroic. He sacrificed his life for the sake of Israel, and his fellow Jews. And he did so while breaching the highest levels of one Arab state that was, and remains, a threat to Israel and its citizens, especially with the advent in recent years of growing Iranian influence and its physical and military presence. It remains to be seen whether Eli Cohen’s remains will be brought home to Israel. It’s unclear if recent visibility will increase that possibility, or make it an even more distant dream. One thing is that Cohen has never been forgotten by his grateful country. In July 2018, it was announced that Eli Cohen’s watch has been recovered from Syria which was presented by Mossad Director, Yossi Cohen, to Eli Cohen’s family. Clearly, this glimmer of hope indicated that no matter how much time has passed, Israel had never given up on repatriating Cohen’s remains.

The same way Cohen led a secretive operation in Syria for years, so too Israel spent no shortage of time and resources to bring home one of its top spies. If Israel owes Eli Cohen and his family anything, this is the least we can continue to strive for, and underscores the Jewish values of honoring the dead no matter where they are or how much time has passed.