Why People of Faith Should Oppose Bernie Sanders on Population Growth 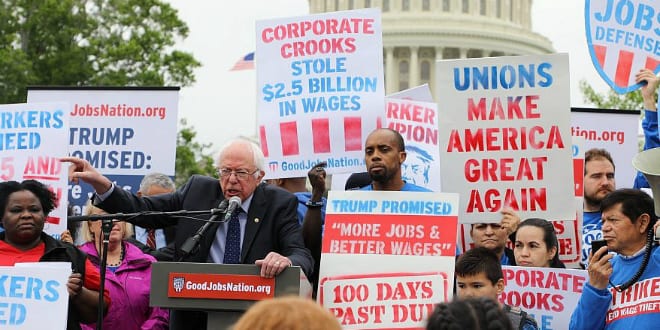 American Jews are divided on many issues. But if there is one true consensus issue for American Jews, it’s abortion. A Pew Research Center poll showed that more than 81 percent of the community believed that abortion should be legal in most or all cases. This is rooted in part in the fact that Jewish religious law diverges from those of other faiths on the primacy of the life of the mother. So it’s hardly surprising that most Jewish groups stand with the pro-choice side in debates about the issue.

But no matter how ardently you cheer for the preservation of the U.S. Supreme Court’s Roe v. Wade decision that legalized abortion, you should be shocked by an exchange aired during CNN’s Climate Crisis Town Hall that featured appearances by the top 10 2020 Democratic presidential candidates.

During the session with Bernie Sanders, a woman who was identified as a teacher asked the Vermont senator if he shared her belief about “the need to curb population growth,” and if it he would “make it a key feature of a plan to address climate catastrophe?”

Sanders replied, “The answer is yes.” In and of itself, his agreement with her question’s premise would be an astonishing assertion completely untethered from any scientific consensus about either climate or population growth. But the really bad news is what followed.

Sanders wasn’t content merely to signal his willingness to assent to anything that sounded green. The septuagenarian Socialist decided to use the suggestion of limiting population growth as an excuse not to merely restate his support for the right to abortion, but to further argue that the United States must fund abortion in the Third World, a policy on which Republicans and Democrats have differed since the 1980s.

What was appalling about Sanders stand is that he made it specifically in the context of a claim that one of the world’s top problems is that there are too many human beings living on our planet, and that concern over the impact of climate change means fewer babies should be born.

This is troubling because linking support for abortion to the notion that too many people exist in the world, particularly in Third World countries, is merely recycled eugenics. Eugenics, which was popular in the early 20th century, was a racist fake science that held that humanity would be best served by eliminating inferior races.

Eugenics had some prominent advocates, including Margaret Sanger, the country’s leading proponent of birth control and the founder of the group that evolved into Planned Parenthood. But American support for eugenics evaporated when the Nazis championed it. They put this awful idea into practice by seeking to exterminate disabled and mentally challenged persons, and then ultimately, the entire Jewish people.

There was a time in the 1960s and 1970s when fashionable opinion agreed with this Malthusian notion that humanity would reproduce itself out of existence because an expanding population would consume all the finite resources available.

Stanford University scientist Paul Ehrlich’s 1968 book The Population Bomb claimed that 65 million Americans would soon starve to death due to food shortages, and that India and even Great Britain could cease to exist for the same reason by the year 2000.

The dystopian 1973 sci-fi movie classic “Soylent Green,” starring Charlton Heston, also reflected this mindset. The film showed a world where trees were extinct, and the government was enticing people to end their lives so as to relieve overpopulation. And (spoiler alert) those who committed assisted suicide were being turned into food for the remaining humans.

That reflected the way many people thought about the future at the dawn of the modern environmental movement.

But it was all bunk.

As The New York Times noted in a 2015 feature that discussed “the unrealized horrors of population explosion,” not only did Ehrlich’s predictions of mass starvation in America not come to pass but, as you may also be aware, India and the United Kingdom haven’t disappeared.

As Sanders’s questioner noted, the world’s population has doubled since the time Ehrlich was peddling nightmares. But thanks to human innovation and genius, the world has managed to find ways of increasing agricultural output that allowed it to continue feeding itself. If famines still sometimes occur, it is almost always caused by war or corruption, not the lack of food on the planet. History has taught us that science and industry have proved capable of solving difficult problems. The Malthus ian reductionism of Ehrlich’s books and “Soylent Green” were fairy tales, not truth.

Sadly, some of those entrusted with the education of small children, like the woman on the CNN town hall, are still buying this nonsense.

In the age of the Internet, even the most cockeyed theories can resurface and gain support. If, with the tacit endorsement of a leading Democratic presidential contender, the idea that there are too many people can be revived, so, too, can the notion that aborting more people, particularly in poor countries that receive American aid, will avert this false threat to humanity.

At that point, this stops being a scientific or even a political debate and becomes a moral one.

Defenders of Sanders have sought to parse his response as not supporting eugenic abortion. Yet his refusal to disavow the link between abortion and population control, as Presidents Clinton and Obama did, is alarming. As CNN anchor S.E. Cupp noted, the fact that someone like Sanders is “willing to entertain this vile idea is not only disgusting, it should be disqualifying.”

No matter where you stand on abortion rights, promoting it as a way of ridding the world of superfluous humans should offend the sensibilities of all people of conscience and faith. You don’t have to be “pro-life” in order to understand that underestimating the potential of human beings and devaluing human lives sets us out on a path to horror that is more real than sci-fi fantasies.

That’s why it is particularly important that Jewish groups that have been such ardent supporters of reproductive rights speak out against this effort to resuscitate eugenics by linking it to popular concerns about climate change. Jews ought to be at least as united in opposing fake science aimed at promoting racist theories as they are about abortion.