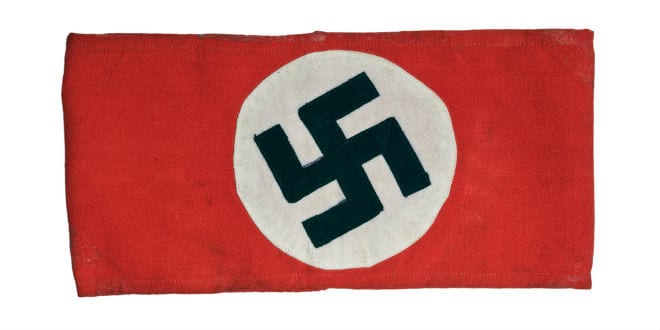 If the use of Nazi symbolism in fashion was manifested in isolated cases, there would be only slight cause for concern. But when this trend is backed or glossed over by giants such as Amazon, the biggest online sales platform in the world, we cannot remain indifferent. From home decor to clothing and accessories, the popular website is infested with products depicting Holocaust victims heading to the gas chambers and images glorifying the Third Reich. This trend comes to shake us up to the realization of the urgency and pertinence of uniting our forces. By becoming one unified people, will we be able to not only to avoid trivializing the atrocities of the past, but also to prevent history from repeating itself.

All kinds of merchandise with pictures of concentration camp victims and images exalting Hitler are now easily found in online stores. There is already a fashion trend called “Nazi chic” gaining popularity throughout the world.

International fashion companies have caused uproar in recent times for using anti-Semitic imagery and hate symbols in their designs, such as striped garments including yellow stars resembling the clothing Jews were forced to wear during the Holocaust, and swastikas.

Minimizing the Holocaust as a Tragedy

Once taboo, the glorification of anti-Semitic manifestations and Nazi symbols is becoming increasingly acceptable in fashion, art, music, sports, festivals, and even amusement park attractions, such as a swastika-shaped ride recently closed in Germany where the public display of Nazi propaganda and memorabilia is illegal. Just this past year, however, this ban was lifted for computer games.

Amazon recently confirmed that it will launch operations in Israel in the coming weeks, including a Hebrew website for local customers and retailers. This comes during the timeframe when the Auschwitz Museum has condemned online advertisement and sales of products featuring starving Jews from the Holocaust and Nazi symbolism being promoted as an “ideal gift.” The Jewish memorial demanded a more strict verification system for retailers “as sometimes things go beyond just bad taste and become disrespectful. Especially when images of victims are there.” Online shoppers have also been shocked by the offensive merchandise and some e-commerce companies, including Amazon, have agreed to pull some specific items from their websites in certain locations while others remain available online in different countries.

The trend to trivialize the darkest chapter in Jewish history is worrisome because, as we can see, it is now found in basically every human field. Moreover, polls conducted in Europe show that the memory of the Holocaust is starting to fade. In America, one of three people queried on the subject do not believe that 6 million Jews were murdered in the Holocaust.

What about Making Connection Fashionable?

Today’s growing hatred toward Jews and people’s indifference to historical Jewish suffering reminds us of our task. This grotesque trend is an opportunity for us to reflect on the reason for anti-Semitism and to remember that we have a method of connection to prevent the atrocities from recurring.

Over many centuries, our ancestors fought to maintain their unity above their growing selfishness. But 2,000 years ago, Jews succumbed to unfounded hatred and were exiled from their land. Since then we have lost the ability to be a light unto nations because we have lost our unity. The moment we lost our unity was the moment when anti-Semitism as we know it began.

Only when we rekindle the brotherly love we cultivated centuries ago and share the method for achieving this with everyone, will the world will stop hating and blaming us for all its troubles. How is this possible? It is possible because, whether we like it or not, Jewish unity determines the state of the world and its fate. Through our connection, we stream a positive, uniting force into the world, a force the world desperately needs. Conversely, our separation denies humanity this power and evokes within it hatred toward Jews. This is the cause of the nation’s aggression toward us and why they perceive us as the source of all evil.

In his essay, “The Arvut (Mutual Guarantee),” Rav Yehuda Ashlag writes about the important role of the Jewish people: “The Israeli nation was established as a conduit to the extent that they purify themselves [from egoism], they pass on their power to the rest of the nations.”

Now is our time to become a “light unto the nations” through our example, to make unity, peace and calm the only trendy fashion in the world. We cannot allow atrocities to happen again when we have a method of prevention through our connection. It is indispensable to stick to this goal of brotherly love among all Jews above all obstacles because our lives depend on it and because the well-being of the world requires it of us.