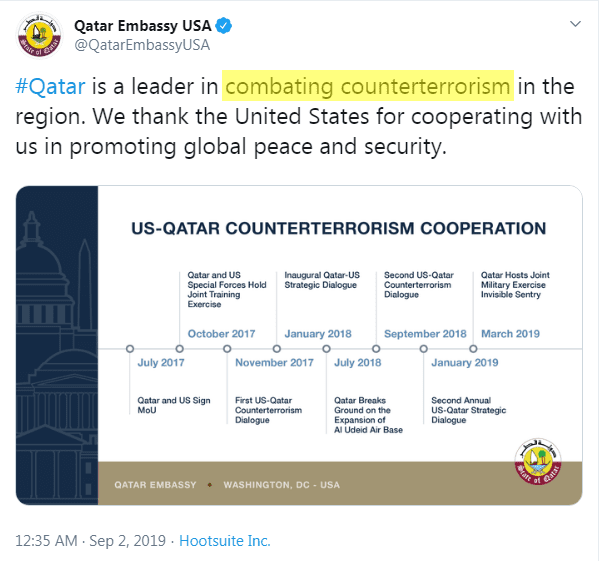 The Twitter account for the Qatari embassy in the United States posted a schedule of joint Qatari-US training exercises saying: “Qatar is a leader in combating counterterrorism in the region. We thank the United States for cooperating with us in promoting global peace and security.

The tweet appeared to be a mistake as it was summarily deleted and replaced with the text: “Qatar plays a vital role in the global fight against terrorism and bring security and stability to the region.”

#Qatar plays a vital role in the global fight against terrorism and bring security and stability to the region. pic.twitter.com/YXfHpDyjK1

But for a country like Qatar to indirectly call themselves terrorists might not be a far cry from the truth. That’s because in 2014, Qatar had pledged $400 to Hamas. The US has designated Hamas as a foreign terrorist organization.

Their funding doesn’t end with Hamas. Qatar has also been accused of funding ISIS. Abdul Karim al-Thani, a member of the Qatari royal family, operated a safe house for the founder of Al-Qaeda in Iraq (the predecessor to ISIS) Abu Musab al-Zarqawi. Al-Thani provided Qatari passports and deposited $1 million into a bank account to finance AQI.

Additionally, the gulf state has been accused of funding the Jabhat Al-Nusra organization, designated as a terrorist entity by the UN, the EU, Canada, the U.S., Israel, Hong Kong, Switzerland, and Australia.

And finally, Qatar funded Al-Qaeda. In fact, Jamal Ahmed al-Fadl was Osama bin Laden’s former business associate. He defected to the US in 1996. During his testimony to the 9/11 Commission as well as Congress, Al-Fadl stated that in 1993 Bin Laden revealed to him that the Qatar Charitable Society (QCS), which later changed its name to Qatar Charity, was one of Bin Laden’s many sources of funding.