Twitter CEO Refuses to Apologize After Pro-Hitler Tweets During Hack 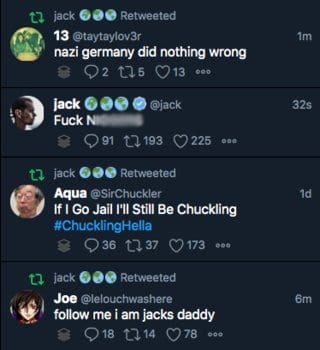 “Hitler is innocent go follow @taytaylov3r if you want every Jew gassed” was just one of many tweets that showed up on Twitter CEO Jack Dorsey’s official Twitter feed after it was allegedly hacked on Friday reports Buzzfeed.

Right before 1 p.m. in Pacific Daylight Time on Friday, Dorsey’s @jack account tweeted a link to a Discord chat and retweeted a series of tweets. One of those posts read: “follow me i am jacks daddy.”

Dorsey’s account also tweeted a string of racist epithets and even a bomb threat targeting Twitter’s headquarters located in San Francisco. The tweets were taken down within approximately 20 minutes of publication.

“The phone number associated with the account was compromised due to a security oversight by the mobile provider,” a company spokesperson said in a statement. “This allowed an unauthorized person to compose and send tweets via text message from the phone number. That issue is now resolved.”

The phone number associated with the account was compromised due to a security oversight by the mobile provider. This allowed an unauthorized person to compose and send tweets via text message from the phone number. That issue is now resolved.

No apology was offered to anyone who may have been offended by the tweets that were broadcast on his account.

The hack is widely considered to have embarrassed Dorsey by revealing the fact the Twitter CEO is incapable of keeping himself secure on his own app. The hack allegedly means that the perpetrators are capable of reading his private direct messages.

The hackers called to themselves the “Chuckle Gang” and redirected anyone viewing the tweets to a discussion board. However, that board was taken down even more quickly than Twitter could remove the posts. The group didn’t give any sort of the motive behind the hack, though it did request that Dorsey remove the suspensions of several accounts.

Twitter has been under fire in the past for censoring conservative media personalities such as Milo Yiannopolous and conspiracy theorist Alex Jones.

Also in the past, the Twitter chief admitted that he took advice on handling conservatives from a person named known both as Ali Alexander and Ali Akbar who tweets extensively about Jews, claiming that they are “over-represented” and peddling “Jewish supremacy”.

Twitter has not responded to a request for an apology.