Israel Spends 1M to Get Women to Take Ritual Bath as Commanded in Leviticus 15:8

Home » Israel Spends 1M to Get Women to Take Ritual Bath as Commanded in Leviticus 15:8 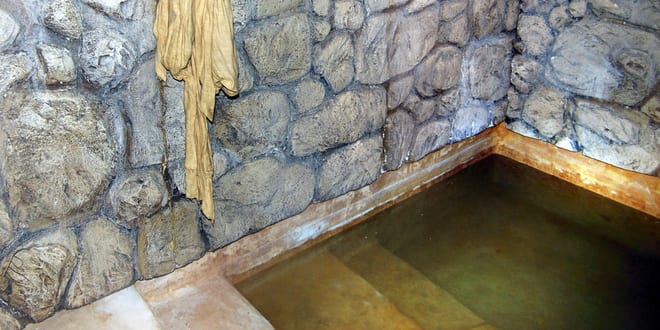 The campaign will present female celebrities who will recall their personal experiences taking the ritual bath and recommend that females viewing the ad fulfill the commandment of immersing in the mikveh as well.

The Jewish Biblical commandment stating that women must immerse themselves in a ritual bath is based on the Torah scriptures stating that females are impure following menstruation until they dunk themselves in the mikveh. A couple is forbidden from engaging in intercourse until the woman has indeed immersed 7 days after the start of her menstruation cycle.

Although the commandment is derives from Leviticus, Rabbinic interpretation is vital for an accurate understanding of the Torah text.

“There are a few different Torah sources given for the requirement that a woman in niddah (woman who had her period but did not immerse in a mikveh) immerse. These include Leviticus 15:18:

If one with a discharge spits on one who is clean, the latter shall wash his clothes, bathe in water, and remain unclean until evening (Leviticus 15:8)

That passage is understood by the most respected Jewish commentator Rambam (Rabbi Moses ben Maimon), as a binyan av (archetype) for anyone who is tamei (ritually impure) that needs to immerse. An alternative scriptural basis is Leviticus 15:21, which requires one who touches a niddah‘s bedding to immerse:

Anyone who touches her bedding shall wash his clothes, bathe in water, and remain unclean until evening (Leviticus 15:21)

All the more so, a niddah herself must immerse. Another source is Bamidbar 31:23, in which a mikveh is referred to as “the waters of niddah” as explained by Halakhic (Torah law) authority Bet Yosef, Yoreh Deah 197:1.

The concept of family purity laws in Judaism requires that any physical intimacy be predicated on the woman going to the mikveh. The idea is a constant renewal of the marriage between husband and wife. During the menstrual cycle itself and nearly one week following the wife’s period, there is no physical contact between spouses until the woman goes to the ritual bath.

“Judaism’s family purity laws have enable married couples for thousands of years to balance between physical and emotional intimacy to ensure we live out a conventional lifestyle in the home.” explained Executive Director of the Center for Jewish-Christian Understanding and Cooperation. He added, “The immersion into the living waters of a mikveh is not about being hygienically clean, but the spiritual transformation that allows for a husband and wife to be fully intimate with one another.”

The campaign’s objective, is to change the perception of ritual baths making the commandment more appealing. The advertisements are to be presented on television and other digital media platforms.