Arab MK Admits: Palestinians Use ‘Prayers’ on Temple Mount as Precursor to Violence 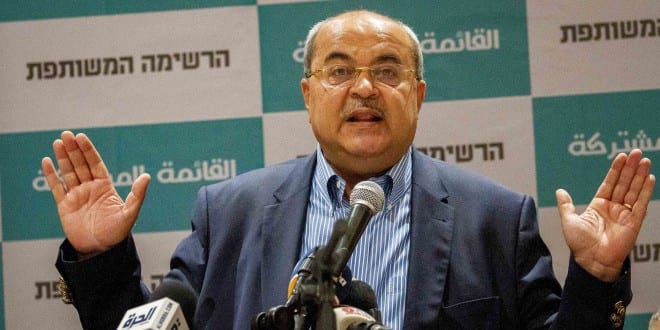 In a revealing interview on Israeli television, an Arab MK described Muslims prayers as a precursor to violence, stated that the entire Temple Mount is a mosque, and denied that Israel has any sovereignty over Judaism’s holiest site.

Last Sunday, Jews fasted last Sunday for the holy day of Tisha B’Av commemorating the destruction of the Jewish Temples on the Temple Mount. This year, the Jewish holy day coincided with the  Muslim holiday of Eid al-Adha in which the Muslims celebrate Abraham’s willingness to sacrifice Ishmael.

Jewish visitation is normally quite limited but the Temple Mount is always open to Muslims except when Arab violence forces the police to close the site. The Israeli police routinely close the Temple Mount to Jewish visitation on Muslim holidays over concerns of Arab violence. In the past, when Jewish and Muslim holidays coincided as they did last week, preference was given to the Muslims and Jews are excluded. But last week, the Israeli police made the difficult decision to ensure the right of the Jews to visit their holiest site on Tisha B’Av was protected. Despite the violence, a record 1,729 Jews ascended to the Temple Mount.

It should be noted that this decision was made especially difficult after the Grand Mufti of Jerusalem Mohammed Hussein, ordered all mosques in Jerusalem except for Al Aqsa, the silver domed mosque on the Temple Mount, to be closed on Sunday so that more Arabs would go to the Temple Mount. He called for the Arabs to prevent the Jews from entering the Temple Mount Compound. On the morning o Tisha B’Av,  a sign was put up at the entrance to the Temple Mount depicting Hamas terrorist and of the Muslim Brotherhood’s former leader, Mohamed Morsi, with Arabic writing saying, “No to the ‘Deal of the Century’” and quoting Morsi’s saying, “Our soul yearns for the Temple.” It is not clear what temple the sign was referring to since Islam has never had a temple and the holiest site in Islam is in Mecca, almost one thousand miles south of Jerusalem.

Just before the hostilities broke out, Ahmad Tibi, an Arab Member of Knesset, arrived at the Temple Mount. The Israeli police were force to use non-lethal crowd control measures and Tibi suffered tear-gas inhalation.

Tibi discussed the events of that day on Israeli television’s Channel 13.

“On Sunday, Eid al-Adha, a day of prayer, the great holy day, the police presented themselves en masse in an aggressive manner at the site for no reason. They used gas grenades and rubber bullets and shock grenades. We were standing in front of the Mughrabi Gate and suddenly were being launched at our feet.”

The interviewer, Udi Segel, stopped Tibi at this point.

“You are presenting this as if nothing happened to cause the police to use tear gas,” Segel said. “I understand this happened in response to riots; Muslims trying to prevent Jews from entering.”

Itamar Tzur, an Israeli news writer, made a video analyzing the television interview. Tzur noted that Muslims have unimpeded access to the Temple Mount via seven gates. The Mughrabi Gate is the only gates available for non-Muslim use and Arabs are excluded from using it. Also, until 1967, there was one mosque on the Temple Mount; the silver-domed Al-Aqsa Mosque. Since 1967, the Arabs have usurped an additional four spaces for Muslim prayer. It should also be noted that none of those Muslim prayer spaces are near the Mughrabi Gate. There was no reason for the Arabs to congregate at the Mughrabi Gate except to blockade the only entrance available to the Jews.

“I can bear witness to what happened when I was in front of the Mughrabi Gate with the people from the Waqf (Muslim authority). There were hundreds of people praying there.”

It should also be noted that the police delayed Jewish visitation by three hours, waiting until the Muslim prayers, which have strict times, were over.

“Do you understand the desire of religious Jews to be at that place?” Segel asked.

“I refuse any attempt to break into Al-Aqsa Mosque or for Jews to pray,” Tibi answered. “I do not call it the Temple Mount. I call it all Al-Aqsa.”

The term ‘Al-Aqsa’ translates into “the furthest” referring to a story in the Koran about a miraculous overnight journey by Mohammad to “the furthest mosque” while riding a mythical winged creature call Al Buraq. Though some branches of Islam believe this is a reference to the silver domed mosque on the southern end of the Temple Mount in Jerusalem, other branches of Islam consider this to be heretical or an incorrect understanding of the Koran. Most Koranic scholars understand the term “furthest mosque” as specifically referring to a mosque near Jeharna in Saudi Arabia.

Jerusalem, which is never mentioned in the Koran, only took on any significance in Islam in the late 8th century when the Bedouin Muslims prevented the Damascus Muslims from making Haj (pilgrimage) to Mecca. As an alternative destination for Haj, the Damascus Muslims decided on Jerusalem, adding a Hadith (oral commentary) shifting the scene of Muhammad’s Night Journey to Jerusalem in order to justify their decision. This alternative Haj continued for eight years during which time the Dome of the Rock was constructed.

This false narrative was reinforced by UNESCO resolutions which referred to the Western Wall as Al-Buraq Plaza.

Tibi referred to the Temple Mount as ‘occupied territory’, which Segel took offense at.

“Even Christianity considers this to be a mosque, the Holy Jerusalem. Even the ‘narrative’ and even the reality hold that this mosque is in Jerusalem which is currently under the rule of a conqueror. The site is under the rule of a foreign power, not under Palestinian rule.”

Tzur noted that at no point in history has the Temple Mount ever been under Palestinian rule.

“Are you saying that Jews should be prevented from going to the site even if there is archaeological proof that this is site has Jewish relevance?” Segel asked.

“I don’t want to discuss proof, whether or not they exist,” Tibi answered. “Our scientific opinions are different. The archaeological opinion is different from what you are saying now.”

“This is an extraneous discussion. You need to separate religion from holy sites. Al Aqsa Mosque is a place of prayer for Muslims, end of story.”

“But, even if I say now that I want to take over the Great Synagogue in Tel Aviv because it was a mosque 80 years ago, even you would rise up in anger.”

Segel then suggested that Jews can mourn the loss of the Temples at the same time as the Arabs pray for Eid al-Adha. Segel’s statement is, in fact, consistent with the Jewish concept of the Temple as “a House of Prayer for All Nations”, a concept that Tibi dismissed out of hand.