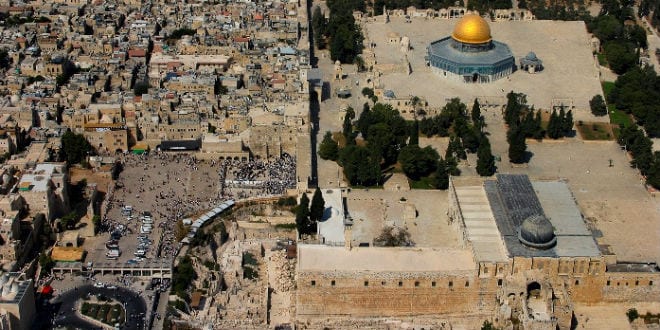 A spokesman for the Jordanian Foreign Ministry warned on Tuesday that a change of the status quo on the Temple Mount would have serious consequences. The statement came in response to Israeli Public Security Minister Gilad Erdan saying during an interview Tuesday that he saw “an injustice in the status quo” that “we need to work to change.”

The official Petra news agency reported that Jordan rejects Erdan’s comments, and had sent a letter of protest to Israel through diplomatic channels.

“I think there is an injustice in the status quo that has existed since ’67,” Erdan told Israel’s Radio 90. “We need to work to change it so in the future Jews, with the help of God, can pray at the Temple Mount.” He clarified his remarks by adding, “This needs to be achieved by diplomatic agreements and not by force.”

As of 1994, under a peace treaty brokered by U.S. President Bill Clinton between Israeli Prime Minister Yitzhak Rabin and Jordanian King Hussein, Israel recognizes Jordanian custodianship of the Temple Mount and allows the Islamic Wakf to ban non-Muslim worshippers during Muslim holidays, whereas Israel maintains security control of the sensitive holy site.

“It is Minister Erdan’s right to put a suggestion on the table for discussion,” said Israeli Foreign Minister Yisrael Katz in an interview with Kan public radio. “He didn’t force it but rather set it down. But the sovereignty is the State of Israel’s.”

The statements came after clashes between large groups of Muslim worshippers and Israeli police on Sunday, as celebrants of the Muslim Eid al-Adha holiday rioted to prevent Jews entering the Temple Mount during the Jewish fast day of Tisha B’Av.

Jordan and other Muslim countries responded with outrage over the clashes.

“We completely condemn Israel’s violations of the blessed Al-Aqsa Mosque,” Jordanian Foreign Minister Ayman Safadi wrote on Twitter. “The occupation authorities’ absurd actions and attempts to change the status quo in occupied Jerusalem will only lead to the conflict being exacerbated and the situation blowing up, threatening international peace and security. We call on the international community to assume its responsibilities and pressure Israel to stop its violations.”

Jerusalem District Police Commander Doron Yadid accused the Wakf of changing the status quo by purposefully altering Muslim prayer times so as to create a scheduling conflict with the Jews seeking to visit the Temple Mount.

“As long as I’ve known this place—and I’ve known it for many years—the morning prayers for the [Eid al-Adha] holiday begin at 6:30 in the morning,” Yadid told reporters. “Miraculously, [this year] they changed [the time of] the prayers to 7:30 [a.m.] Is this not a change of the status quo?”