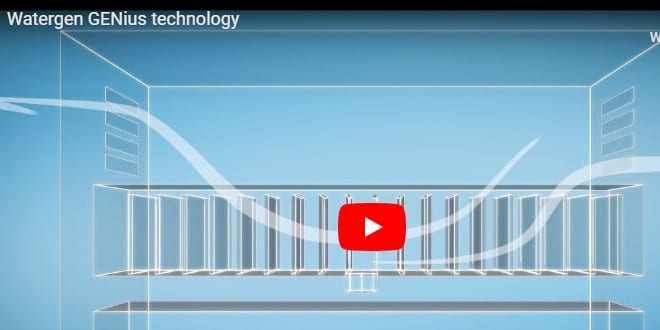 An Israeli innovation that is nothing short of miraculous is bringing relief to the thirsty people of Flint Michigan and restoring the faith to a community that has more than its share of hard times.

An Israeli Gift to a Michigan Church

The Greater Holy Temple became a main water distribution site in January 2016 in response to the Flint water crisis.

Bishop Roger Jones, the pastor of the Greater Holy Temple, feels the greatest gift was not the machine but something much greater: hope.

“At the beginning of the crisis, ten percent of the people just left the community because there was a sense of hopelessness,” Bishop Jones told Breaking Israel News. “This was a manmade problem and no government institution was helping us.

The crisis began in 2014 after the drinking water source for the city was changed from Lake Huron and the Detroit River to a less costly source of the Flint River. Due to insufficient water treatment, lead leached from water pipes into the drinking water, exposing over 100,000 residents to elevated lead levels. A federal state of emergency was declared in January 2016 and Flint residents were instructed to use only bottled or filtered water for drinking, cooking, cleaning, and bathing.

Most of the people were previously employed in the automotive industry and were now unemployed, adding to the sense of hopelessness.

“That Watergen has brought about a sense of hope,” Bishop Jones said. “It has created excitement and expectations like an oasis in a desert, like Miriam’s Well in the desert. The Children of Israel knew that if they could just get to the next spot of water, they would live to see the promised land.”

The Bishop related how when they wanted to help the community, Watergen contacted the church.

“Usually, it’s the church asking the local government for help,” Bishop Jones said. “But Watergen came right to us, to the church, when they wanted to help the community.”

The church hosts a food and water drive every Thursday which serves 460 cars each week.

“We never turn it off and every day people come in for water every day,” Bishop Jones said. “Even on Sunday, we have sometimes 100 bags of water at the altar and thirsty people come up and get their water.”

Israeli company steps in where the local government wouldn’t

Bishop Jones has visited Israel several times and feels an even stronger connection through Watergen.

“It is ironic that Israel produced this as well as all of the spiritual innovations,” he said. “So much has gone out from that little country and gone out to feed the world, body and spirit. This is a priceless gift to people who have no resources, who have no water.”

When people hear the story of how such a great thing was born in Israel, technology that is practically a miracle, that can take water from thin air, they have only one problem,” Bishop Jones said. “They don’t understand why this story has not been told. But Israelis a country of miracles, Biblical and modern. That they donated this to a church, for us, that was a miracle.”

The Miracle of Water from Air Conceived inside an IDF Tank

Watergen was founded in 2009 by  Israeli entrepreneur and former combat reconnaissance commander Arye Kohavi.  Yehuda Kaploun, president of Watergen USA, explained the necessity that led Kohavi to invent the device.

“Kohavi was sitting in a tank sweating and wanted to drink some water,” Kaploun explained. “He didn’t understand why, if there was so much humidity in the air in the tank, why did he have to go out and risk being shot just to get a drink.”

After his army service, Kohavi developed his patented system and as per this initial vision, the company focused on providing water supply solutions for military purposes.

The company was acquired in 2016 by Michael Mirilashvili, a Russian-Israeli billionaire and vice president of the World Jewish Congress. Recognizing that 2.1 billion people around the world lack access to clean water,  Mirilashvili shifted the company’s focus to combatting the growing problem of water scarcity and answering the needs of civilians following natural disasters.

True to their mission, Watergen sent four water generators to Texas and Florida in 2017 in the aftermaths of Hurricanes Harvey and Irma, respectively, working with the American Red Cross and FEMA (Federal Emergency Management Agency) to provide clean and safe drinking water. In November 2018, Watergen provided its atmospheric mobile water generator known as a GEN-350, to rescue responders in California during the devastating Camp Fire in Butte County.

The company’s goodwill seems endless and in May, they installed a water generator in an orphanage in Bukhara, Uzbekistan. Watergen also is sending 10 GEN-350 units to Brazil for installation in schools and hospitals in locations with little access to safe drinking water.

The system, named GENius, pulls outside air into the car, filters out all pollutants, cools the clean air to its dew point — the temperature at which condensation occurs – and sends it through a multistage filtering process that removes any remaining impurities and adds essential minerals to the water, which is then stored in an internal reservoir and kept fresh through constant circulation.

Kaploun emphasized that an additional benefit of the Watergen system was a reduction of plastic waste. It is also energy-efficient, producing one gallon of water using 1 Kilowatt of energy. Other atmospheric water generating devices, by comparison, consume three to four times more energy, making Watergen a more attractive solution for financially strapped users.

Watergen has units for large scale production of water, small units for domestic use supplying an average of 15 liters of drinking water a day, medium-sized devices fr institutions that produce 450 liters a day,  schools, larger units that produce 3,000 liters daily, and an emergency response vehicle which securely transports units to emergency situations and natural disasters.