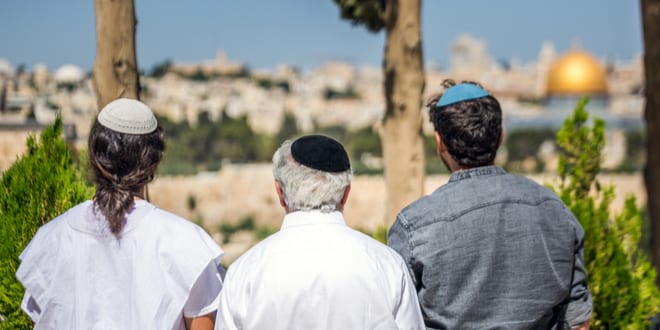 This might come to you as a surprise, but here it goes: The Crusader conquest of Jerusalem of 1099 has never really gone away.

Yes, you heard right, the Crusade of yore is alive and kicking.

Now at this point, you’re probably wondering what the heck I’m talking about.

After all, who are these modern-day Crusaders? So I’ll explain.

They are none other than the Greek Orthodox Church.

That’s because the Greek Orthodox Church has commandeered property in Jerusalem since 1847.

That’s when they were allowed to return to the Middle East by the Ottoman Empire.

The Orthodox Patriarch is the uninterrupted line of Apostolic succession to the Catholic episcopal see of Jerusalem.

The Brotherhood of the Holy Sepulchre, which is closely linked to the Orthodox Church of Jerusalem, remains the custodian of many of the Christian Holy places in the Holy Land, sometimes jointly with the Roman Catholic Church.

Yes, they work hand-in-hand with the Roman Catholic Church.

The same Catholic Church that has stolen all of the Jewish treasures from the Temple.

And shamefully enough, they still hold onto them to this day.

They do it in an effort to erase the Jewish connection to Jerusalem.

That’s because it feeds into their replacement theology, but that’s a whole other conversation.

How do you think Jews view Christianity knowing that the Church has stolen Temple artifacts and refuses to return them?

And that their very partners in the Greek Patriarchy are doing the same thing by stealing Jewish land in Jerusalem.

Do you think this helps the Jewish perception of those who believe in Jesus?

Of course it doesn’t.

Yes, we know that what the Patriarch does has nothing to do with the Evangelicals.

But unfortunately, most Jews don’t.

See, what most Christians don’t realize is that the vast majority of Jews don’t know the difference between Catholics and Evangelicals.

They see everyone who believes in Jesus as one religion.

And they see all sects of that religion as a single entity that’s cut from the same cloth.

And can you blame them?

After all, Evangelicals have a long way to go before righting all the wrongs that the Christians have done to the Jews.

But there is a group of Jews that could help:

That group is called Ateret Cohanim.

They are inadvertently fighting this phenomenon and combatting anti-Christian sentiment without even realizing it.

See, as previously explained, the Greek Orthodox Church is giving all Christians a bad name to the Jews in Jerusalem.

That’s because aside from colluding with the same Catholics who harbor stolen Temple artifacts, they also own a lot of land in Jerusalem.

But that’s not what’s causing the resentment.

What is causing resentment is that whenever they sell any of that land to Jews, they violate their contracts.

This is nothing short of a Catholic land grab of Jerusalem.

Or, if you think about it, it’s a reincarnation of the crusade.

And they do it without firing a single shot.

The most classic example of this modern-day Crusade is the story of the Petra and Imperial Hotel in Jerusalem.

Back in 2004, Jewish businessmen bought both the Petra Hotel and two floors of the Imperial Hotel, both located near the Jaffa Gate in the Old City (Jerusalem).

The organization that facilitated the sale was…Ateret Cohanim.

The sale was finalized.

The money was paid and the Jews fulfilled their side of the bargain.

Except that the Greek Orthodox Church tried to renege on the deal.

They claimed that the original sale by Irenaios Skopelitis,  the 140th Patriarch of the Eastern Orthodox Patriarchate of Jerusalem, made the sale while being bribed.

However, the Israeli court ruled that there was insufficient evidence of receiving bribes.

This means that the Greek Orthodox Church either willingly accepted illegal bribes…or that they lied.

(Besides, how does a seller get “bribed” to sell. If he wanted more money, why not just raise the price?)

Either way, they are being wholly dishonest.

Not to mention, they’re giving Christianity a terrible name.

That’s because as previously mentioned, this type of bait-and-switch trickery is all part of the 3rd Crusade that the Catholics are currently waging in Jerusalem today.

But all is not lost.

There is a hero who is standing up to this bully.

That hero is, of course, Ateret Cohanim.

By the way, they also buy property from Muslims, but that’s a whole other story.

Ateret Cohanim not only helps Jews resist the Catholic crusade that’s usurping property in Jerusalem, but they’re also ensuring dishonest players like the Greek Orthodox Church won’t be able to go back on their word after-sales are agreed upon.

And they are doing it all legally.

This means that the silent crusade against Jerusalem is facing resistance from this vital organization.

This also means that Ateret Cohanim is inadvertently improving the Jewish view of Christians among Jews.

That’s because Ateret Cohanim is not letting the Patriarch get away with ripping people off.

And if symbolism means anything to you, Ateret Cohanim has just facilitated the sale of an ancient synagogue back to Jewish owners for the first time in nearly 1,000 years.

This historic synagogue is located just inside the Flowers gate.

So what’s so symbolic about this synagogue?

For starters, it was the scene of a horrific attack by the Crusades back in 1099.

As the legend goes: the Jews of Jerusalem were holed up in this ancient synagogue while they were burned alive by the Crusaders.

As previously mentioned, the cruelty of the Crusaders is fresh in the collective memories of the Jewish people until this day.

And when the Greek Patriarchy tries to swindle the Jewish people out of their legally acquired property in Jerusalem, it only causes more Jewish resentment toward the Christian faith.

But when Ateret Cohanim keeps them in check, not only does it decrease anti-Christian sentiment among Jews, it’s also fulfilling a very significant prophecy.

That’s the prophecy of Ezra which speaks of bringing the Jewish people back to Jerusalem.

These are the people of the province who came up from among the captive exiles whom King Nebuchadnezzar of Babylon had carried into exile to Babylon, who returned to Yerushalayim and Yehuda, each to his own city,

They do this by making sure that all of the complex legal precautions are in place when the sale is made. They also:

There isn’t much reward to those fulfilling the prophecy of making Jerusalem Jewish again while protecting the bad reputation that the Roman and Greek Churches are giving practicing Christians.

Learn all about this important organization by downloading their free ebook.