Gaza Leader: ‘Palestinians Around the World Are Preparing to Kill Jews in Diaspora’

Home » Gaza Leader: ‘Palestinians Around the World Are Preparing to Kill Jews in Diaspora’ 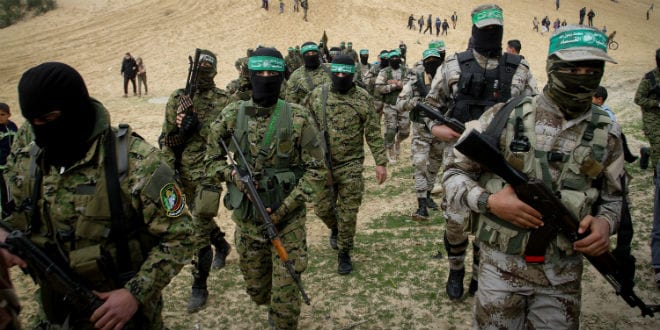 Speaking at the weekly March of Return riots on Israel’s southern border, Fathi Hammad, a member of the Palestinian Legislative Council elected by the Palestinian people and a leader in Hamas, called for his “brothers in the diaspora” to kill Jews all over the world. His speech was translated by the Middle East Media Research Institute (MEMRI).

“Our patience has run out. We are on the verge of exploding. If this siege is not undone, we will explode in the face of our enemies, with God’s permission and glory. The explosion is not only going to be in Gaza but also in the [West] Bank and abroad, if God wills,” Hammad said.

“If you don’t lift the siege, we will explode in the faces of our enemies, Allah willing,” Hammad said. “And the explosion won’t just be in Gaza – it will also be in the West Bank and abroad, Allah willing. Our brothers abroad are still preparing. They are warming up… They have been warming up for a year and a half… Oh, you seven million Palestinians abroad, enough warming up! There are Jews everywhere! We must attack every Jew on planet Earth – we must slaughter and kill them, with Allah’s help. Enough warming up!

Hammad also called for the Palestinians in Israel to intensify their stabbing attacks against Israeli civilians.

“O, the people of the West Bank, until when will you be quiet?” he said. “We want knives to come out. Five shekels. How much does the neck of a Jew cost? Five shekels or less?”

He also stated that Hamas was making explosive belts to be used against Israelis by Gazans passing through the border crossing in order to work in Israel or to receive humanitarian services.

“By Allah, [the Jews] will be killed by our [explosive] belts, Allah willing!,” Hammad threatened. “There are new factories for [explosive] belts and they are up and running. Anybody who wants one can wait his turn… you can have one, and you, and you… Go!”

Hammad also rejected the Eguptian-brokered ceasefire between Israel and Hamas

“May the mediators and the Zionist enemy hear this message!,” Hammad said. “If we die, we die – but we will die with honor, while attacking, and not while retreating! We will die while exploding and cutting the necks and legs of the Jews! We will lacerate them and tear them to pieces, Allah willing.”

Hammad’s call to murder Jews is consistent with the goals of Hamas as outlined in its original covenant issued in 1988. The covenant states, “Israel will exist and will continue to exist until Islam will obliterate it, just as it obliterated others before it.”

The original covenant goes on to call for the death of Jews around the world by saying,  “The Day of Judgement will not come about until Moslems fight the Jews (killing the Jews), when the Jew will hide behind stones and trees. The stones and trees will say O Moslems, O Abdulla, there is a Jew behind me, come and kill him.”

The covenant goes on to cite the “Protocols of the Elders of Zion”,  a fabricated account purporting to describe a Jewish plan for global domination published in Russia in 1903 while comparing Israel unfavorably to the Nazis.

In 2017, the Hamas Covenant was modified, limiting their genocidal agenda to the Jews in Israel.

Hammad’s statements were decried by many Palestinian leaders, most notably in an English language tweet from Saeb Erekat, the secretary-general of the Palestine Liberation Organization’s Executive Committee.

Dr. Erekat: The just values of the Palestinian cause include love for freedom, justice and equality. The repugnant statement of Hamas leader Mr. Fathi Hammad about jews doesn’t represent any of them. Religion shouldn’t be used for political purposes. https://t.co/SoFjj5n306

On Monday, Hamas released a statement on their official website:

“Hamas has reviewed the remarks made by Hammad and decided to clarify the following points:

“First: These remarks do not reflect the official stances of Hamas and its policy, which state that our struggle is only against the Israeli occupation which occupies our land and desecrates our holy places. Again, our struggle is not with Jews elsewhere or with Judaism as a religion. Hamas has condemned and continues to condemn any attacks against the Jews and their worship houses worldwide.

“Second: The Great March of Return is a peaceful popular demonstration that aims to reinforce the Palestinian right of return, as well as to break the 13-year Israeli siege imposed on Gaza. The national consensus that the march is popular and peaceful does not give the Israeli occupation forces the green light to target and kill the peaceful protesters.

We call on the Palestinian people to follow the decisions of and participate in the activities organised by the Higher National Committee of the Great March of Return.

Third: We reiterate our appreciation to all mediators, above all our Egyptian brothers, for their endeavours to break the siege imposed on the Gaza Strip and to achieve the national Palestinian unity.

Among his countless threats against Israel and Jews around the world, Hammad threatened U.S. President Donald Trump in a speech two years ago, saying that “Palestine will be your graveyard.”