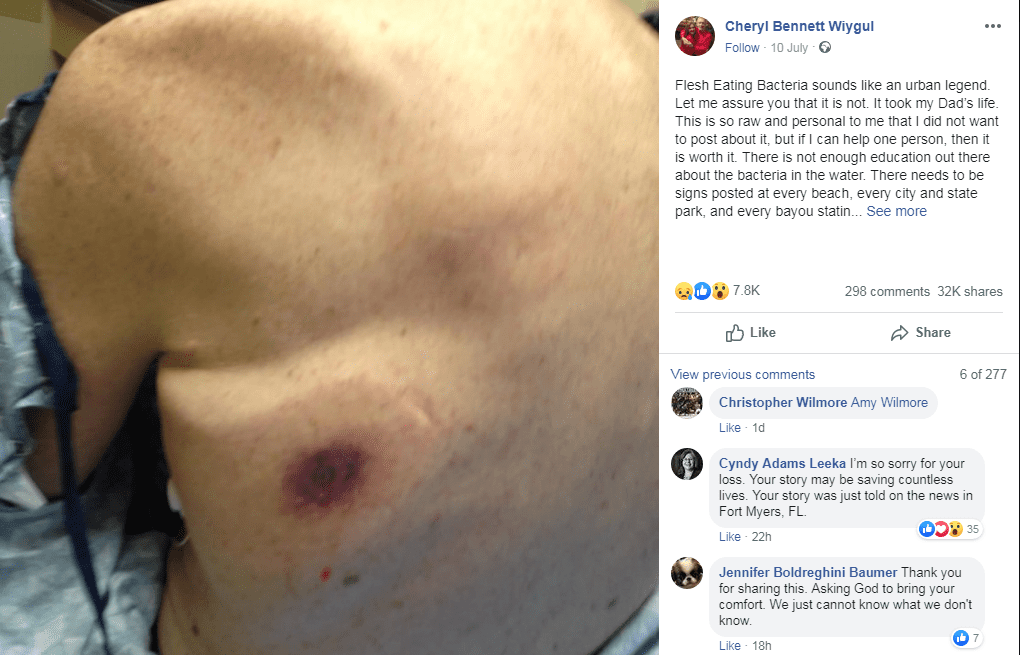 East-Coast beachgoers have been faced with a Biblical threat this summer as a plague of flesh-eating bacteria lurk in the waters of the Atlantic Ocean.

It was reported on Saturday that Dave Bennet, a Tennessee man visiting Florida died just 48-hours after contracting an infection while swimming at a beach in Destin. Twelve hours after being in the water, the man began to complain of fever, chills and some cramping. The man’s daughter stated that awareness of the disease is essential to its treatment.

“There is not enough education out there about the bacteria in the water. There needs to be signs posted at every beach, every city and state park, and every bayou stating that ‘due to naturally occurring bacteria in the water people with open wounds or compromised immune systems should not enter,'” Cheryl Wiygul, Bennet’s daughter, wrote on her Facebook page.

One other person died earlier this month in Florida from the flesh-eating disease. Carolyn “Lynn” Fleming, age 77, fell in the water at Coquina Beach near Bradenton, injuring her leg. Last month, Kylei Brown, 12, almost lost her leg when she scraped her toe and was infected with the bacteria while vacationing at a Florida Panhandle beach.

Several other cases have been reported this month in Florida,

Characteristics of the disease

Necrotizing fasciitis is usually quite rare but acutely painful with a sudden onset that spreads rapidly and can frequently be deadly. According to the U.S. Centers for Disease Control and Prevention, even with treatment one in three people who have a serious necrotizing fasciitis infection can die from it. More commonly referred to as the flesh-eating disease, it is an infection that results in the death of parts of the body’s soft tissue. Typically, the infection enters the body through a break in the skin such as a cut or burn.

The bacteria that cause the disease to thrive in warm, salty water and usually are found in the South with most of the cases being reported in Florida. About 1,000 cases of necrotizing fasciitis occur per year in the United States, leading to about 100 deaths. But the rates have been increasing. Recently, a growing number of cases have been reported among fishermen and crabbers in Delaware Bay between New Jersey and Delaware.

Experts who note rising ocean temperatures are concerned about the disease because it is thought that this may be the factor driving the increase in cases of necrotizing fasciitis. Another exacerbating condition is believed to be increased development on the Florida coast, leading to higher levels of runoff into the Gulf of Mexico following a storm. The rapid introduction of freshwater generates the low-salinity levels preferred by the bacteria.

Rabbi Rami Levy, an end-of-days lecturer from Jerusalem, noted that the technical description of the disease closely resembles the plague described by Zechariah.

“The prophet described a disease that would accompany the War of Gog and Magog,” Rabbi Levy told Breaking Israel News. “The current outbreak is exceptional and appears to fit the prophet’s description but it is not nearly on the scale of what we will see before Moshiach (Messiah)”

“The plague that comes after Gog and Magog will be even worse than the Bubonic Plague the world saw in the Middle Ages, destroying a significant part of the world population,” Rabbi Levy said. “But it will afflict specifically the people who came out against the Jews. It is unfortunate that these people suffered and even though it is impossible to definitively state why misfortunes hit some people and not others, these recent cases of flesh-eating disease in Florida do not seem to fit the description of striking of people who came out against Jerusalem.”

The rabbi noted that this recent outbreak of such a horrifying disease may be a reminder to the public to pray for others.

“Right now we are just seeing wake-up calls, reminders that Moshiach is on the way,” Rabbi Levy said. “God works in stages. He could have created the world in one moment but he chose to do it in six days. The sunrise and sunset are gradual, coming in stages. The Messiah will work in the same way. There will be hints, small occurrences that will reappear in the final days.”

“This is God’s way of showing that even though many of the prophecies seem unlikely or even impossible, they are possible,” Rabbi Levy said. “It gives us a chance to see that everything prophesied about the Messiah can, indeed will happen and we need to prepare now and not when they appear in fullness. But by then, it will be too late.”