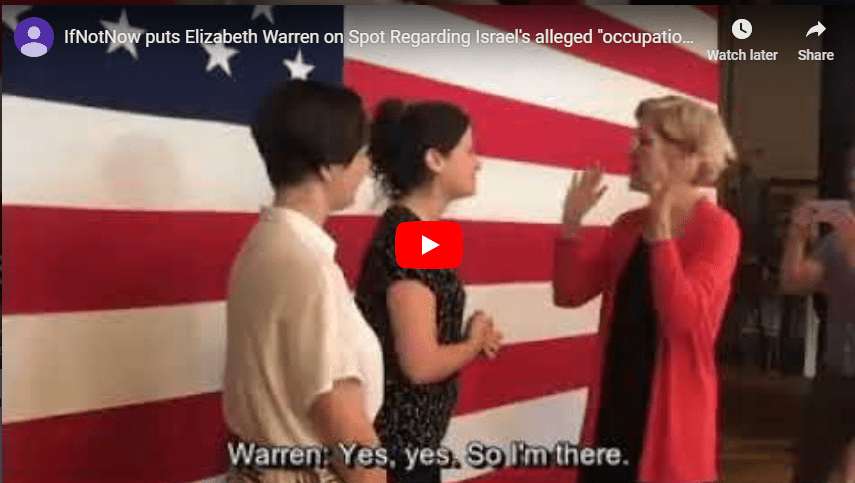 Last month, BIN reported on a new campaign that was launched by the extreme left-wing organization, iFNotNow, to confront Democratic presidential candidates for the 2020 elections. Their objective is to press the candidates to clarify their position regarding the “occupation”. It should be noted that when referring to the Israeli-Arab conflict, the term “occupation” is a common euphemism for ethnically cleansing Israel’s Judea and Samaria region of its Jews.

IfNotNow activists scored one for their team after approaching former Massachusetts Senator Elizabeth Warren at an event on Monday. One of the activists, named ‘Becca,’ said to Ms. Warren: “Hi, we’re American Jews. We really love the way you’re fighting corruption. We’d really love it if you also pushed the Israeli government to end the occupation.”

At which point Warren pointed at Becca replying “Yes, yes, so I’m there.”

Warren proceeded to get a picture with the activists positioning herself between the two women with an American flag as the backdrop.

Warren’s sentiment regarding the Israeli-Arab conflict has come a long way since her Town Hall meeting back in 2014 where she said “America has a very special relationship with Israel. Israel lives in a very dangerous part of the world, and a part of the world where there aren’t many liberal democracies and democracies that are controlled by the rule of law. And we very much need an ally in that part of the world” as reported by the Cape Cod Times.

When asked by another member of the audience regarding civilian casualties from Israel’s strikes, Warren said she thinks those are the “last thing Israel wants.”

“But when Hamas puts its rocket launchers next to hospitals, next to schools, they’re using their civilian population to protect their military assets. And I believe Israel has a right, at that point, to defend itself,” Warren replied.

Another woman proposed that Israel should be prevented from building any more settlements as a condition of future U.S. aid, however, Warren said, “I think there’s a question of whether we should go that far.”