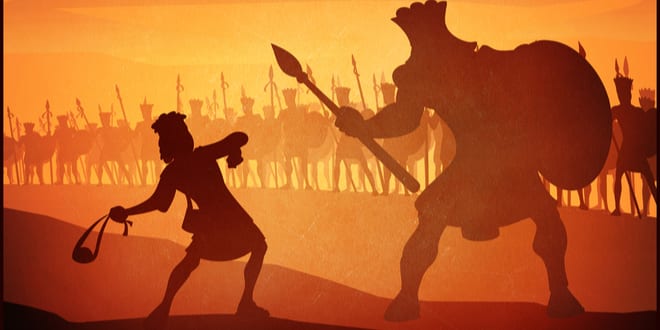 Not very much has been known about the Philistines, except that they controlled the cities of Ashkelon, Gaza, Ashdod, Gath, and Ekron about 3,000 years ago and were arch-enemies of the Israelites, who had to pay annual taxes to them and were not allowed to bear any arms. The enemy invaders were bravely faced by the biblical Saul, his son Jonathan, David, Joshua, Samson and Hezekiah.

The Hebrew word for Philistines – Plishtim – was mentioned 286 times in the Bible, but they suddenly disappeared, leaving no written works or much else besides a small amount of pottery behind them. The Philistines were not recorded in the Torah as one of the nations to be displaced from Canaan, were absent from the 10 nations that Abraham’s descendants displaced in Canaan and were not mentioned in the list of nations that Moses tells the people they will conquer. In the Book of Exodus, God directed the Israelites away from the Philistines upon leaving Egypt.

Now, archeological researchers at the Max Planck Institute for the Science of Human History in Jena, Germany, led by Israeli archaeogenetics researcher Michal Feldman, have achieved a first look at the genomes of 10 Philistine skeletons from the ancient port of Ashkelon who lived 3,000 to 3,500 years ago. In an email interview with Breaking Israel News, Feldman said she is now finishing up her doctoral degree at the Max Planck Institute after previously earning her bachelor’s degree in pharmacy and master’s degree in physical anthropology in Israel.

Besides the Max Planck team were researchers from Wheaton College in Wheaton, Illinois, Harvard University and the Harvard Semitic Museum in Cambridge, Massachusetts; the Ludwig-Maximilians-Universität München in Munich, Germany; and Seoul National University in the Republic of Korea.

Their discoveries, based on archeological work conducted by experts over several decades, has just been published in the journal Science Advances with the title “Ancient DNA sheds light on the genetic origins of early Iron Age Philistines.”

Their data support the hypothesis that a cultural shift was initiated by a large migration of genetically distinct people – possibly a group of sea-faring Europeans – into Ashkelon and points to potential explanations for why the region underwent a dramatic cultural change during the Bronze to Iron Age transition (12th century BCE).

“We sequenced the genomes of people who lived 3,000 years ago in Philistine city of Ashkelon,” the team said in a video statement. “In the 12th and 13 centuries BCE, empires collapsed. Much of civilization collapsed. People woke up 100 years later and found a very different world. One of the groups they noticed was the Philistines. They were the great enemies of the Israelites. Where did they come from? What happened to them?”

The DNA evidence from the skeletons they examined showed origins that were not accessible by researchers before. “We detected that a substantial portion of their ancestry was derived from a European population. The ancestors of the Philistines must have traveled across the Mediterranean and reached Ashkelon at end of Bronze Age or the beginning of the Iron Age.”

During the early decades of the 20th century, archeologists noticed that some styles of pottery in the Philistine era in the Philistine cities seemed to match styles of those in earlier Greece. “We wanted to know what these people were like, their religion, history, and culture.” Instead of the archeologists digging for evidence of pre-humans in prehistoric times, they were able to move into historic times of humans to link connections to historic and religious texts such as the Hebrew Bible.

“Within the history of the Eastern Mediterranean, the end of the Bronze Age and the beginning of the Iron Age were marked by exceptional cultural disarray that followed the demise of prosperous economies and cultures in Greece, Egypt, the Levant, and Anatolia…The period between the late Bronze and early Iron Age was a turbulent time for the Eastern Mediterranean,” the team wrote.

“Cities were destroyed, empires collapsed and cultural disarray ensued. Scientists have long debated whether the cultural transformation coinciding with this chaotic chapter of history was driven by an internal shuffling of knowledge and new ideas or the movement of new populations into the territory. Because of poor DNA preservation in this region, no genetic data from this time period have been available to shed light on this mystery, until now.”

They extracted genome-wide data from the recently excavated remains of 10 skeletons from the era from the port city of Ashkelon. Feldman and colleagues found that early Iron Age peoples were genetically distinct compared to earlier-existing individuals in the region, suggesting that a large wave of foreigners did indeed arrive in Ashkelon during the Bronze to Iron Age transition, which aligns with the biblical account of Philistines.

They wanted to look not just at objects but at people. What were the Philistines like? What was their religion, their culture? Who exactly were these migrators? Models suggested that they came from southern European gene pools, possibly the “Sea Peoples.”

“Interestingly, within no more than two centuries, the distinct genetics of early Iron Age individuals – containing a mixture of southern European and Philistine genes – was no longer detectable in late Iron Age individuals (though these people continue to be identified as Philistines in ancient texts). Though more precise genetic evidence is needed, these results suggest that the incoming gene pool of the migrators was “diluted” by dominant genes of the local population.”

Surprisingly, the Max Planck researchers wrote, “the migration of the Philistines did not leave a long-lasting genetic signature on the region. Within no more than two centuries, the distinct genetics of these early Iron Age individuals – containing a mixture of southern European and Philistine genes – was no longer detectable in late Iron Age individuals (although these people continue to be identified as Philistines in ancient texts).”

“The findings are a good example of how DNA can be a powerful tool to record history and answer historical questions,” concluded Feldman. “But it reminds us that culture or ethnicity don’t necessarily equal the genetic makeup of the same groups.”