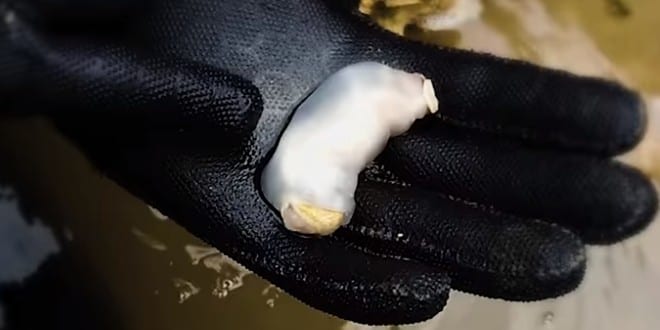 Marine biologists have just made a remarkable find: a unique rock-eating worm found only in one river in the entire world. Remarkably, it may be that the existence of this worm was hinted at in Jewish tradition as an essential element used by King Solomon in the construction of the Temple in Jerusalem. Its recent discovery comes just in time for it to play a role in the construction of the Third Temple.

In 2018, marine biologists doing research in the Bohol region of the Philippines were incredulous when locals told them about a marine worm living in a remote river that ate rocks. Locally, it’s known as “antingaw,” and young mothers eat it because they think it will help them lactate. The scientists were even more surprised to find that the rumor was true.

The worm is unprecedented, representing both a newly identified genus and species scientists named Lithoredo abatanica. It is a worm-like bivalve, a freshwater clam commonly known as a shipworm (Teredinids). The new worm is also unique in its dietary habits; every known shipworm eats wood, a trait known as xylotrepetic, but the new discovery eats rock and expels sand as scat while it burrows. Thus far, the worm has only been found in a short stretch of the Abatan River in the Philippines, burrowing into the limestone.

“These animals are among the most important in the river and in this ecosystem,” Shipway told Science Daily. “As they bore elaborate tunnels in the limestone bedrock, these animals change the course of the river and provide a really rich environment for other aquatic species to live in. So far, this is the only place on earth that we know these animals exist.”

“There are a small number of animals that do ingest rock — for example, birds use gizzard stones to aid digestion,” Shipway said to Live Science. “But Lithoredo abatanica is the only known animal that eats rock through burrowing.”

“When I was diving in the river, I saw burrows that were over 2 feet [60 cm] in length!” Shipway said. “So, there may be some absolute monsters living deep in the rock.”

The existence of the worm may have been unexpected among scientists however a rock-eating worm was described in Midrash (homiletic teachings) as a necessary element in the construction of Solomon’s Temple in Jerusalem.

Rabbi Shlomo Yitzhaki, the noted medieval French rabbi and author of a comprehensive commentary on the Bible known by the acronym Rashi comments on this verse that iron, the material of deadly weapons, should not be used to shape the stones of the Temple, the essence of which is peace.

And if you make for Me a mizbayach of stones, do not build it of hewn stones; for by wielding your tool upon them you have profaned them. Exodus 20:22

When King Solomon set out to construct the Temple, he was faced with a difficulty in the construction of the altar. The Torah requires that the altar be made of stones that have not been quarried or shaped by steel. Referenced throughout the Talmud, the Shamir, a worm capable of cutting the hardest rock with absolute precision, was reputed to have existed in the time of Moses, as one of the ten wonders created on the eve of the first Sabbath, just before God finished creation.

The timing of its creation was essential to the nature of the Shamir. Rabbi Judah Loew ben Bezalel, a 17th Century Torah sage from Prague known as the Maharal, explained that the entire physical world created during the Six Days is governed by the laws of nature. Not having been created exactly within this time frame, the Shamir is therefore supernatural.

Moses reputedly used the Shamir to engrave the precious stones in the High-Priest’s breastplate. King Solomon, aware of the existence of the Shamir, but unaware of its location, commissioned a search for the elusive worm. The Shamir was kept in wool and stored in a container made of lead since it would have cut through any other material.

Despite its unique diet, Rabbi Zamir Cohen, a noted scholar and head of the Beitar Illit Yeshiva, noted differences between the recent find and the fabled Shamir.

“Our Sages tell us in Tractate Sota that the size of the worm was as small as barley, and this worm is much larger,” Rabbi Cohen said to Hidabroot. “In addition, the words of the Talmud indicate that the worm pierced and cut the stone by means of radiation that emanated from it and not in any other way, as it is written there regarding the precious stones in the garments of the High Priest, on which the names of the twelve tribes were inscribed.”

Unfortunately, there is an opinion in the Talmud that the Shamir, created for a single purpose, ceased to exist after it completed its task: “When the Temple was destroyed, the Shamir vanished.”

Rabbi Yosef Berger, the rabbi of King David’s Tomb on Mount Zion, stated that the discovery of the rock-eating worm may be a harbinger of the imminent Third Temple era.

“Hashem (God, literally ‘the name’) sends us what we need when we need it,” Rabbi Berger said to Breaking Israel News. “The Shamir was created to help build the Temple. This discovery may be a sign that the need is arising again.”

Rabbi Berger cited Rabbi Yom Tov ben Avraham Asevilli, a medieval Talmudic commentator known by the acronym ‘Ritva’, who stated that the Shamir could still be found but only with great difficulty. Rabbi Berger cited the Talmud which related how Solomon forced Asmodeus, the king of the demons, to tell him where the Shamir was located. Asmodeus confessed that it was being guarded by the peahen but was under the watchful eyes of the angel who ministered over the seas.

“This might be a hint that the worm is actually a sea animal,” Rabbi Berger said.

“Moses and Solomon used the Shamir but Maimonides states that constructing the Temple, even the altar and the breastplate, is not entirely dependent on the existence of the Shamir,” Rabbi Friedman told Breaking Israel News. “Other methods that do not include iron can be used.”

Though they probably do not realize the Third Temple implications of their discovery, the marine biologists were both pleased and mystified.

“Most other shipworms are as skinny as your finger,” Shipway says. “These animals are quite chubby, robust. They look really different. Where they get their nutrition we don’t know.”

The new shipworm also may provide new insights for paleontologists. Until recently, fossil borings in rocky substrates were thought to be a marker for ancient marine habitats, Shipway explains. L. abatanica shows that such fossils might mark ancient freshwater sites as well.