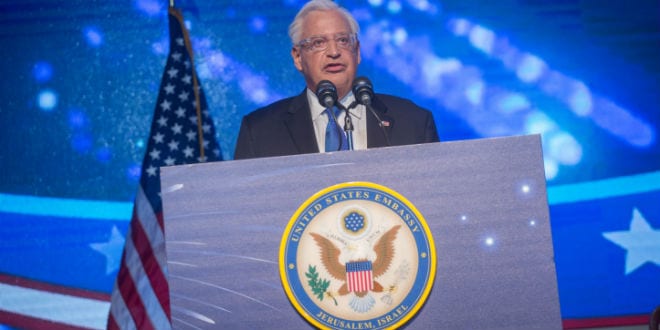 The New York Times got quite a scoop when, in an interview with its Jerusalem bureau chief David Halbfinger, U.S. Ambassador to Israel David Friedman said that he favored Israel’s annexation of the West Bank. That was the lede of Halbfinger’s article, as well as in the headline. And that was also the way the story was played in virtually every one of the many publications that picked up on the story.

If true, that would be big news indeed. But there are two problems with the way the interview has been reported. The first is that Halbfinger didn’t publish a quote from Friedman in which he actually said the word “annexation.” The second is that what he did say has actually been U.S. policy for more than 20 years. In other words, in the disturbing phrase that has become all too much part of our public discourse in the last few years, the widely reported claim that the Trump administration just endorsed Israeli annexation of the West Bank appears to be “fake news.”

Halbfinger’s article began with the following assertion: “Israel has a right to annex at least some, but ‘unlikely all,’ of the West Bank, the United States ambassador, David M. Friedman, said in an interview, opening the door to American acceptance of what would be an enormously provocative act.”

That assertion is backed up by only one line of the article in which Friedman is quoted as saying, “Under certain circumstances,” Mr. Friedman said, “I think Israel has the right to retain some, but unlikely all, of the West Bank.”

Friedman didn’t say the word “annexation.” It’s Halbfinger who uses the word in his narrative. But in what he otherwise describes as a “wide-ranging interview,” he can’t supply a single quote to specifically back up the one newsworthy aspect of the piece.

That’s important because although the transcript was not published, Halbfinger probably gave Friedman many opportunities to say “annexation.” But he got not a single quote with the key word escaping Friedman’s lips.

The possibility of annexation has been in the news because Israeli Prime Minister Benjamin Netanyahu hinted at it in an interview prior to the April 9 general elections.

Netanyahu promised that he would extend Israeli law to the settlements, even though that meant nothing since Israeli law is already applied there. It was a gesture aimed at winning some pro-settlement votes. But when his pro-annexation allies sought to translate that vague promise into tangible results during the post-election coalition negotiations, it’s been widely reported that Netanyahu made it clear they were wasting their time. The prime minister had zero interest in doing anything that might be perceived as undermining a Trump peace plan. Which is to say there will be no annexation anytime soon, if ever.

Yet it’s also true that Friedman is a longtime supporter of the settlement movement, meaning that he likely would personally welcome Israeli holding on to as much of the West Bank as it could. But the one comment that Friedman made in his interview that seemed to directly address annexation was actually equivocal: “Mr. Friedman declined to say how the United States would respond if Mr. Netanyahu moved to annex West Bank land unilaterally. ‘We really don’t have a view until we understand how much, on what terms, why does it make sense, why is it good for Israel, why is it good for the region, why does it not create more problems than it solves,’ Mr. Friedman said. ‘These are all things that we’d want to understand, and I don’t want to prejudge.’ ”

Which shows that despite the fact that he is a diplomatic novice, Friedman knows how to obfuscate and not answer questions as well as any State Department veteran.

So despite the claim that Friedman endorsed annexation, Halbfinger’s article proved nothing of the kind.

But there’s another important point that was lost in the rush to put words in Friedman’s mouth and to condemn the Trump administration for allegedly overturning decades of U.S. policy. It’s that it has been official U.S. policy for more than 20 years that Israel has “the right to retain some” of the West Bank.

That was the formula for peace pursued by the Washington at the Camp David summit in July 2000 when President Bill Clinton and Israeli Prime Minister Ehud Barak offered PLO chairman Yasser Arafat an independent state in most of the West Bank, Gaza and a share of Jerusalem. But part of that plan, which Arafat turned down, was that Israeli would retain some of the West Bank. It would be repeated in all future peace negotiations carried out under George W. Bush and even Barack Obama.

Bush put it in writing in a letter to Ariel Sharon in 2004 prior to the withdrawal from Gaza in which he assured the Israelis that they could count on U.S. support for holding onto Jerusalem and the West Bank settlement blocs.

So the argument that Friedman said something worthy of his being fired—as some on the left have claimed—is as absurd as it is outrageous.

What his critics really can’t stand about Friedman is that he is willing to say that the West Bank or any other part of the country isn’t “Palestinian territory” but disputed land, and that Israel can assert its rights as well as its security needs in any negotiation. He’s right about that. And he’s also right that the United States is not opposed to Israel holding on to at least some of the West Bank in the event of a theoretical peace agreement that the Palestinians clearly have no interest in negotiating, let alone signing.

The fact that both the Times and those who repeated Halbfinger’s spin have misreported this interview, in addition to the facts about established American policy under the last four presidents, is more evidence of the partisanship and declining ethical standards in so much of the contemporary news media.