Israeli Researchers Show How Fatty Liver Disease Can Be Reversible 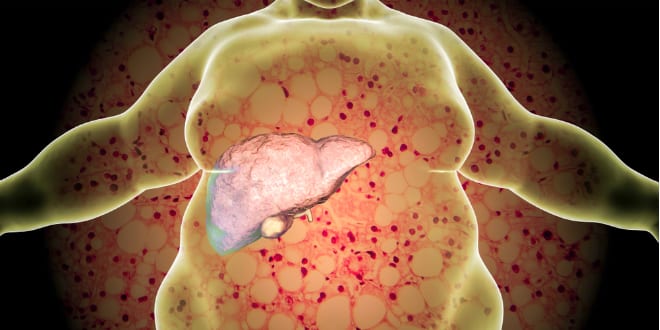 If your protruding belly is preventing you from seeing your toes, you may be a candidate for non-alcoholic fatty liver disease, which is potentially very dangerous and may progress to scarring and irreversible damage to the vital organ – and even liver cancer.

That’s the bad news. But there is good news about fatty liver disease. With a proper diet, exercise, reducing the amount of fat in liver cells and weight loss, the condition can be reversible.

A team of researchers headed by Prof. Iris Shai of Ben-Gurion University of the Negev in Beersheba has used magnetic resonance imaging (MRI) technology to map body fat. The study, recently published in the Journal of Hepatology, mapped fat deposits in the bodies of hundreds of patients and measured the effects of a variety of diet regimes on their fat deposits over a long period of time.

The research team, which included scientists from Leipzig University in Germany and Harvard University in Massachusetts, collaborated with Soroka University Medical Center in Beersheba and with the Nuclear Research Center – Negev (NRCN). They found that a low-carbohydrate Mediterranean diet had a greater effect on reducing fat in the liver, around the heart and in the pancreas, as compared to low-fat diets with similar calorie counts – despite the fact that the level of weight loss was similar. The team also found that moderate physical exercise reduced the stores of fat in the stomach that are called visceral fat.

The various fat deposits reacted differently to different interactions: Together with moderate weight loss, the amount of liver fat was cut by 30%, fat around the heart decreased by 11% (about 70 cc reduction in volume) and visceral fat was reduced by 25%. Pancreatic and muscle fat was reduced by only one to two percent.

As a group, obese people are at higher risk of a variety of diseases than thin people, particularly heart disease, cardiovascular complications and Type-2 diabetes. However, with the growth in obesity rates around the world – some 24% of Israeli and more than 40% of American adults are overweight – it turns out that the risk that accompanies obesity is more characteristic of certain sub-groups of obese individuals than others.

Therefore, one of the most important challenges researchers face today is identifying the sub-groups or “types” of obesity in the population, and developing treatments with a goal of improving their health.

For example, it turns out that when fat deposits are stored in the abdomen, there is a greater risk of “cardio-metabolic “disease than when the excess fat is stored under the skin. This understanding, alongside other characteristics of visceral fat, suggested that this type of fat is a central cause of obesity-related illness and that the effectiveness of a variety of treatments should be tested for their specific abilities to reduce visceral fat deposits.

While fat accumulates in the abdomen region, the percentage of fat in the liver also rises in most obese people. The impact of this buildup is still a matter of debate (the classic ‘chicken-and-the-egg’ dilemma of which came first. There is still no agreement whether fatty liver disease is a disease of its own, and many experts believe that without further changes to the liver, like development of infections and/or fibrosis (development of proteins outside cells), there is no significant health risk). Therefore, there are currently no treatments specifically intended to treat fatty liver, other than general advice to lose weight.

The findings, said the researchers, significantly contribute to the emerging understanding that for many obese people, excess liver fat is not merely a sign of health risks associated with obesity, including cardiovascular disease and diabetes, but is likely also a cause.

The research team tested the significance of reducing liver fat (in contrast to abdominal fat) by comparing the results of some 300 overweight people who followed two reduced-calorie diet regimes – a Mediterranean diet of vegetables and fruits, nuts, legumes, whole grains and fish, and a low-fat diet. Following the subjects for a period of 18 months, the team showed that changing their respective nutrition habits were consistent with the trial groups to which they were randomly assigned.

In addition, each participant was subjected to a full-body MRI exam for analyzing the distribution of body fat before, during and after the trial period.

The “CENTRAL” study is believed to break significant ground towards developing personalized nutritional protocols to address a variety of specific fat deposits using MRI technology, the most precise method now available for mapping and quantifying fat deposits throughout the human body and for understanding their significance and the role they play.

The study, unprecedented in both its length and breadth, contributes a vast database, consisting of thousands of body images for finding and mapping fat deposits in the human body (it turns out that during a person’s lifetime, fat cells move among various body parts, and that fat plays a variety of health roles, from defense to neutral to poisonous). By following the extent and breadth of these changes over time the researchers, who have developed technologies to quantify specific types of fats, have now paved the way for deeper, more precise understanding of the dynamics of weight loss during a diet period.

“Healthful nutrition, while also maintaining consistent, moderate weight loss, has a much more dramatic impact on levels of body fat related to diabetes, heart disease and cardio-vascular disease than we previously thought,” noted Shai. “This study could help hone future medical protocols to make them more specifically appropriate for particular types of fat being treated and preferred strategies.”

Prof. Ilan Shelef, director of imaging at Soroka, added, “This study supports other recent studies that demonstrate the precision of MRI technology in measuring fat quantities in the liver. At the same time, the development of similar technologies that could one day present alternatives to taking liver biopsies from patients and will allow repeat measurements in order to adjudicate a particular obese patient’s level of health risk, as well as his/her response to treatment.”

Currently the group is completing an additional clinical trial that will consider the question of whether a green Mediterranean diet (a proposed improved version of the Mediterranean diet, rich in polyphenols derived from green plants) has an advantage in influencing liver fat and other body systems like the brain, genome, microbiome, heart and other fat deposits. This clinical trial will join an impressive list of nutrition trials led by Prof. Shai that are unprecedented in their scope, length of study and the use of groundbreaking technology to answer questions about basic nutrition. These trials have already played an important role in undermining conventions and transforming medical protocols around the world.