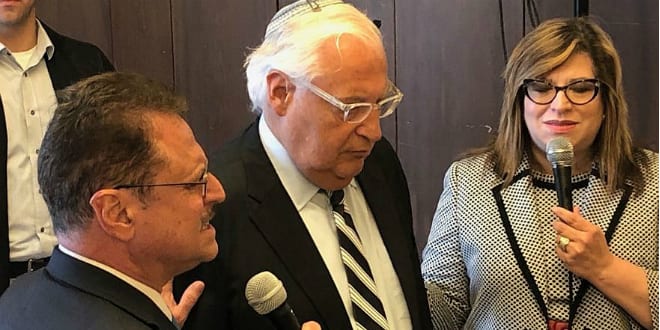 As expected, Friedman’s comments led to fierce criticism. The Palestinians already call him the “settler spokesman.”

But in fact, instead of blaming the settlers, the Palestinians can only blame themselves. And given that we are in the era of “narratives,” namely, lies that pretend to be history, we should pay attention to the facts.

The Palestinians have rejected every proposal that would lead to them having a state. The Peel Commission of 1937 offered the Jews just four percent of the land designated for the Jewish National Home by the League of Nations’ 1922 Mandate for Palestine and 17 percent of the Land of Israel west of the Jordan River. The Arab side said no.

In 1947, the United Nations proposed a Jewish state on 55 percent of Western Palestine. The Arab side said no. The ensuing War of Independence ended with 78 percent of the Land of Israel in the hands of the Jews.

In 1967, immediately after the Six-Day War, the idea arose to offer the Arabs all the territories captured in the war in exchange for peace. The Arab side responded with the infamous “three nos” of Khartoum.

It seems therefore that the main factor in annexation – as far as the expansion of the Jewish entity can be called annexation – is Arab rejectionism. They have said no, over and over again, and as a result lost more and more territory.

Now the Palestinians are demanding the 1967 lines, which were so vehemently rejected in the past. But when you do give it to them – they don’t want to take it.

In the past two decades, there were further proposals that gave the Palestinians 95 percent of the territories – from President Bill Clinton in late 2000, Prime Minister Ehud Olmert in 2008, and Secretary of State John Kerry and President Barack Obama in 2014.

According to every peace proposal, the major settlement blocs – which comprise about five percent of the West Bank – will remain in Israeli hands. If this is the definition of annexation, then Friedman did not say anything new. The point is, it is not clear what Friedman did mean.

Is this annexation in the vein of the peace proposals, or annexation as imagined by the Yesha Council of Settlers? The former is completely legitimate, but only within the framework of an arrangement.

The second option would be a disaster that would lead to Israel’s destruction. I suspect that Friedman, however, did mean the latter.

Palestinian rejectionism is leading the slow march toward the common solution of the extreme right and the anti-Israel left – a single big country.

Donald Trump, at the beginning of his tenure, did not reject the idea of a single state, and now Friedman has poured oil on that fire. And the blame is placed on the Palestinians.

But the Palestinians are achieving their goal. True, they derided and rejected Friedman, but declarations of annexation both from Israel and the U.S. serve their purpose.

Senior Palestinian official Ziad Abu Ziyad said in response to Friedman that annexation should happen, but it should be annexation of all of the territories in order to create a bi-national state.

Friedman’s statement, therefore, is no cause for Israeli celebration; it is cause for concern.