The “Cultural Intifada” Israel is Losing on the Temple Mount

Home » The “Cultural Intifada” Israel is Losing on the Temple Mount 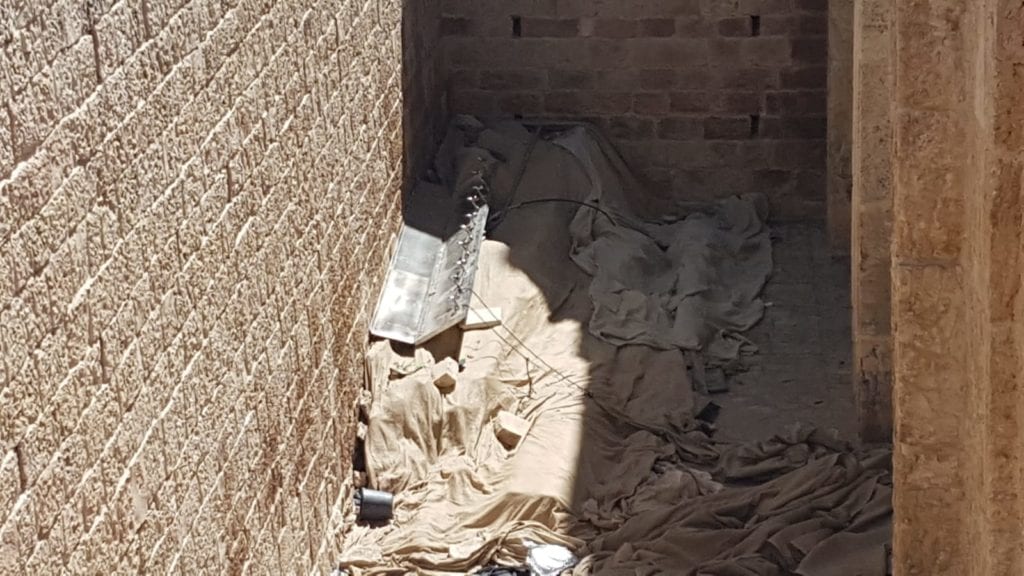 Visitors to the Temple Mount have documented timbers from the First and Second Temple being abused in a manner that will ultimately lead to their destruction.

In March, Palestinians rioted on the Temple Mount, breaking into an area adjacent to Sha’ar HaRachamim (Gate of Mercy, also known as the Golden Gate). The site was locked 16 years ago by court order after it was used as a meeting place for a Hamas-affiliated organization.

Their actions were in gross violation of agreements between Israel and Jordan concerning the site. In 1967 there was one mosque on the Temple Mount: the silver-domed al Aqsa. Due to Mulsim expansionism, there are currently five areas set aside for Muslim prayer that are off-limits to non-Muslims. As per the initial agreement, non-Muslims are restricted from praying on the Temple Mount.

This area is incredibly sensitive for political as well as religious reasons and this violation led to international negotiations involving Jordan and the United States. Several court orders were issued by the Israeli High Court. The Waqf ignored these summonses and ultimately was allowed de facto control over the site.

According to Jewish tradition, the Messiah will arrive via the Sha’ar HaRachamim. Out of a mistaken belief that Jewish tradition speaks of the Messiah being from the priestly caste, the Ottomans built a cemetery in front of the gate in order to prevent the Jewish Messiah from arriving.

In addition to religious interests, the site has archaeological significance that is being overlooked. Adjacent to the site is a pile of timber covered in a tarpaulin. Though they appear to be refuse and are treated as such by the Muslims, some of these timbers are from Solomon’s Temple. Jewish visitors to the Temple Mount have noted that refuse is being piled on top of these precious timbers.

Dr. Gabriel Barkay is familiar with Waqf abuses leading to the destruction of artifacts. He began the Temple Mount Sifting project in 2005 after Waqf renovations to Solomon’s Stables resulted in over 400 truckloads of material containing artifacts being removed from the Temple Mount and dumped in landfills. Much of the material was lost but Dr. Barkay’s Sifting Project has succeeded in recovering many of these invaluable remnants from the Jewish Temples.

Dr. Barkay explained the history and significance of the timbers.

“The earthquake in 1927 caused extensive damage to the Aqsa Mosque, causing it to collapse,” Dr. Barkay explained to Breaking Isreal News. “The roofing beams were dismantled and later, at the request of the Waqf, the beams were studied by Robert W. Hamilton, director of antiquities for the British Mandate. He described most of the beams and wooden panels as being from the early Islamic Ummayad Dynasty from the Eighth Century. The best examples were taken to be displayed at the Rockefeller Museum near Jerusalem where they are on display to this day.”

Dr. Barkay explained that some of the beams are currently in the Islamic Museum on the Temple Mount. Others were stored underneath the Temple Mount in Solomon’s Stables.

“When that area was turned into the Marwani Mosque, the beams were moved and many of them disappeared,” Dr. Barkay said. “The leftovers were put in the outer courtyard next to the Golden Gate.”

Some of the beams were sold to an Armenian wood merchant and even more disappeared.

“They were sold as scrap wood,” Dr. Barkay said. “It is quite possible that some ended up as firewood.”

In the 1970’s, the beams were checked by a team of Israeli botanists who determined that most of them were cedars from Lebanon and some are Cyprus trees. They carried out Carbon-14 tests on several of the timbers.  Some were determined to have been felled about 1,340 years ago which is approximately when al Aqsa Mosque was originally built. One cypress beam was determined to be was found to be 2,600 years, or around 630 BCE, around 50 years before the destruction of the First Temple.

Shockingly, one of the oak beams was determined to be 2,860 years old. That meant the tree had been cut down around 880 BCE, early in the First Temple period.

“It may be that these beams were used in al Aqsa Mosque as a secondary use,” Dr. Barkay said. “It is possible that when al Aqsa was first built, the builders used materials that were on site from the destroyed Jewish Temples.”

About a decade ago, the Israeli Antiquities Authority wanted to preserve the beams but the Waqf insisted the beams are their property. There have been unconfirmed sightings of some of the beams stored next to the Golden Gate being burned.

“It is a very sad situation when antiquities of this importance are destroyed,” Dr. Barkay said. “Past experience has shown that the Waqf does not care about the antiquities of any civilization but their own. And here we see that they don’t even care to preserve artifacts from their own history.”

“When the Waqf worked with heavy machinery and carted away over 400 truckloads of earth from the Temple Mount, they showed a barbaric approach. They for sure should not be entrusted to take care of such delicate and important antiquities.  These artifacts are important for the history of all of humanity and civilization. We see here, as in other nations, that the Muslim attitude towards history and the past is entirely lacking tolerance and respect. This is a war of civilization; the Islamic civilization against all others. It is, quite simply, a cultural intifada.”

The appearance of refuse at the Golden Gate is additionally disturbing because it may indicate that the Waqf is renovating the site into a more permanent prayer area. Shortly after the riots that opened the area to Muslims, the Waqf requested permission from the Israeli authorities to perform these renovations at the site and they were denied. If the renovations are extensive, then even more artifacts will be destroyed.