Trump and the Jews: A Fascinating Look into American Jewry and the US-Israel Relationship Under Trump

Home » Trump and the Jews: A Fascinating Look into American Jewry and the US-Israel Relationship Under Trump 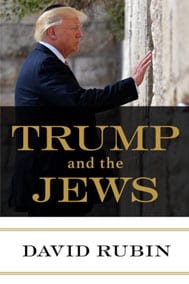 Ever since U.S. President Donald J. Trump’s surprise victory in the 2016 election, it seems as if nobody on the political spectrum has stayed neutral. Trump’s detractors have called him racist, sexist, anti-Semitic and a white supremacist. His supporters, the so-called “deplorables” (nicknamed by Hillary Clinton during the 2016 elections) are quick to come to his defense, calling his critics equally negative names and arguing that Trump’s non-traditional ways have positioned the U.S. administration back onto the right side of history.

Whether left, right or center on the proverbial political aisle, nearly everyone agrees that the Trump era has caused a significant change in the U.S., and even global, political arena.

As such, and as author David Rubin notes in his new book, Trump and the Jews, whenever something momentous happens in the world, the Jewish people ask: “Is it good for the Jews?” In his book, Rubin seeks to answer this question in the context of a Trump Presidency, exploring the complexities of the President and his relationship with the Jewish people and Israel.

He poses that while American Jewry has historically trended toward the Democratic party, at the same time, they represent some of “Trump’s harshest and most vociferous opponents” This raises the obvious question, “How can a president who has been so good for the Jewish people fail to receive [the liberal American Jewish community’s] support?”

Trump and the Jews explains that while the majority of Jewish Americans voted for Hillary Clinton, there is a “strong and growing part of the Jewish community that isn’t so clearly anti-Trump,” Rubin told Breaking Israel News. The majority of these Jews are Orthodox Jews and those “very strongly connected to Israel and their Judaism.”

To inform and explain this perspective and as a US-Israel relationship expert, Rubin provides examples, photographs and illustrations woven into a historical backdrop about the relationship between the Jewish people and America. The beginning of the book focuses on America’s founders and former Presidents, including “Biblically-based visionaries” like Benjamin Franklin, who Rubin says “derived much of his wisdom from the Torah of Israel.”

He shares how the relationship went from a strong one to a difficult one, influenced by “anti-Israel sentiments” of President Carter, whose imprudent “peace plans” were echoed by the succeeding administrations of George H.W. Bush, Bill Clinton and George W. Bush.

There is an entire chapter dedicated to the Obama years, which Rubin argues sped up the “process of failed peace plans” and resulted in a shift in American alliances in the Middle East and around the world. “During those eight years, the Israel-United States alliance was tested and threatened like never before,” writes Rubin.

The book then goes on to describe discourse about Israel in the 2016 elections, now turning its focus to Trump’s life prior to becoming a Presidential candidate and his campaign. Rubin does not gloss over Trump’s character flaws and mistakes, however concluding, “Donald Trump is not the monster that some networks would have you believe, even if his style could often be more refined and his statements more eloquent.”

In the next chapters, Rubin focuses on the ‘American Jews’ and ‘New Jews,’ telling us who they were and are and explaining how their immigrant experiences of throwing themselves into American life and culture led to their new identities and political tendencies.

He explains how the “New Jews” have positively influenced Trump’s economic policies, through “relationships of trust that Trump maintained through the years as a high-profile businessman in New York, as well as some Jewish family connections.”

Rubin describes the increasing political polarization of the United States political arena, with anti-Israel discourse and anti-Semitism now coming from the extreme left. He then turns to the Israeli-Palestinian conflict, discussing key players including Arab leaders and their historical alliance with Adolf Hitler.

Rubin then refocuses on the realities of the conflict, also bringing in personal anecdotes. He writes, “My three-year-old son and I were victims of one such Fatah (Palestinian Authority sponsored) terror attack at the end of 2001, when we were shot and wounded while driving home from Jerusalem. I was shot in the leg and my son was shot in the head by terrorists armed with AK-47 assault rifles. The bullet that crashed into my son’s head and through his neck missed his brain stem by just one millimeter, and he survived.”

Rubin notes that among one of President Trump’s “important achievements” is the Taylor Force Act, signed into law on March 23, 2018 and aimed at stopping American economic aid to the Palestinian Authority until the PA stops paying the salaries of imprisoned terrorists and the families of deceased terrorists.

“The terrorists who tried to kill my son and I are still receiving salaries from PA because what the PA sees as a great deed of wounding and killing Jews,” Rubin told Breaking Israel News.

The author then cites Trump’s other key policy decisions regarding Israel, including his nullification of the Iranian nuclear deal, and Israel’s embassy move from Tel Aviv to Jerusalem.

Through this book, Rubin hopes to offer knowledge to Jewish and Christian “supporters of Israel who want to know how to [fight for] the Israel-American relationship.” He continued, “Israel and the U.S. have an opportunity to work together as two bastions of freedom on two sides of the world. Together, these countries can repair the world in God’s image.”

When reading Rubin’s reviews on Amazon, it seems that he is indeed instilling this knowledge amongst Jews and Christians alike. One reviewer called the book a “must read,” maintaining, “The author has presented the historical backdrop which merges into today’s events in a way that brought clarity to me. […] It also has me rethinking the opinions I’d been holding on to about President Trump. I feel so much more enlightened after reading this easy to understand informative book.”

Another reviewer, Christopher Ruddy, CEO of Newsmax Media, declared, “David Rubin’s Trump and the Jews is a powerful and true account of President Trump’s transformation of America’s relationship with Israel, creating a new opportunity for peace. A great read!”

Explaining how his book may pave the way for peace, Rubin clarified that genuine peace must be “based on truth and historical precedent,” virtues to which Rubin believes Trump is dedicated, as compared to former U.S. Presidents who erroneously bolstered the “land for peace” formula.

“The Oslo Accords 27 years ago was one of the greatest mistakes in world history, as it led to intense waves of Muslim terrorism that the world had never before experienced,” said Rubin. “Israel is the size of New Jersey and to hand over historical places in the biblical heartland to the Palestinian Authority, which includes several terrorist organizations, is insane and would not bring peace. Trump understands that it’s a big problem to talk about peace in terms of land for peace.”

Rubin ends his book with “Eleven Suggestions For Trump (From the Jews)”. Whether the American President will read the book and heed Rubin’s advice is unknown, however, Rubin concludes that “one thing is for sure – Donald J. Trump will continue to make headlines and the Jews will continue to be involved.”

To purchase Trump and the Jews on Amazon, click here.