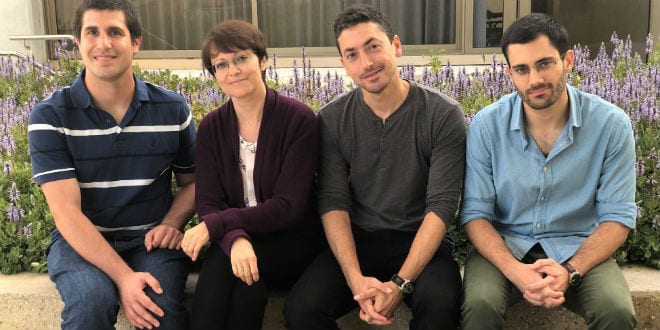 A drug given for treating multiple sclerosis (MS) has been found by researchers in Tel Aviv to help epilepsy patients as well.

Researchers at the physiology and pharmacology laboratory of Prof. Inna Slutsky of the Faculty of Medicine and Sagol School of Neuroscience at Tel Aviv University (TAU) discovered that after certain modifications, a drug called teriflunomide can help with epilepsy, a neurological disorder in which brain activity becomes abnormal, causing unpredictable seizures or periods of unusual behavior, sensations and sometimes loss of awareness.

Epilepsy is the fourth-most-common neurological disorder and affects people of all ages. The paper has just been published in the journal Neuron.

Teriflunomide (marketed by the biopharmaceutical company Sanofi under the commercial name Aubagio, is given to patients with relapsing-remitting MS to reduce flare-ups, reducing swelling and inflammation in the nervous system. It is not a cure for MS but an immunomodulatory drug that inhibits pyrimidine de-novo synthesis by blocking the enzyme dihydroorotate dehydrogenase.

About three or four out of 10 epilepsy patients, including children with Dravet Syndrome (an especially rare and severe form of the disease) do not respond to treatments available today.

The Tel Aviv University researchers’ important discovery is the result of a scientific breakthrough that solved a century-old enigma – what is the mechanism that regulates and ensures the stability of brain activity?  The researchers believe that their findings may serve as a basis for the development of drugs for a range of brain disorders such as Alzheimer’s and Parkinson’s diseases, which – like epilepsy – are characterized by an instability of brain activity.

The study was led by doctoral students Boaz Styr, Nir Gonen and Daniel Zarhin from Slutsky’s lab, under collaboration with Prof. Eytan Ruppin from the US National Institutes of Health. Other participants include Antonella Ruggiero, Refaela Atsmon, Neta Gazit, Gabriella Braun, Samuel Frere, Irena Vertkin, Ilana Shapira, Leore Heim and Maxim Katsenelson, all researchers in Slutsky’s lab, and researchers from the labs of Prof. Tamar Geiger and Dr. Moran Rubinstein of a TAU and Prof. Dori Derdikman from Technion-Israel Institute of Technology in Haifa.

“The concept of homeostasis has a long history in physiology, starting from the work of Claude Bernard in the middle of 19th century on the stability of the milieu interior. In the middle of 20th century, James Hardy proposed a model in which homeostatic mechanisms maintain physiological variables with an acceptable range around a “set point” value. While much effort has been directed to understand neuronal homeostasis, we still don’t know how activity set points are regulated in neural circuits,” explained Slutsky.

She went on to explain that “the instability of neural activity in various parts of the brain is a main element in a wide range of brain disorders, including epilepsy, Alzheimer’s and Parkinson’s.”

Most researchers in the field have so far have looked for malfunctions in the regulation mechanism that could be perceived as a “thermostat” of neural activity, restoring the neural network to its original set point after every event that increases or diminishes activity.

But the TAU team proposed a different hypothesis – that perhaps the set point itself deviates from the norm. In other words: maybe some aspects of the pathological process are generated by a flaw that causes the system to maintain a set point that is either too high or too low. To test this hypothesis, the researchers focused on epilepsy, in which neural networks in an area of the brain called the hippocampus tend to be overactive.

Since metabolic homeostasis is critical for maintaining normal brain functioning, and epilepsy is characterized by significant changes in metabolic activity in the brain, the researches applied a computational model for mapping metabolic processes in cells, developed by the laboratory of Prof. Eytan Ruppin and extensively applied by his lab in cancer research.

Using available genetic data of epilepsy patients, researcher Nir Gonen “turned off” each metabolic gene in the model to search for the gene whose silencing would bring the defective metabolism closest to normal. One of the leading candidates discovered through this method was the gene called DHODH, known to be active in the mitochondria – organelles found in all living cells and serving as their “power station.”  The team noted that this model predicts that DHODH also plays a central role in the metabolic state induced by the low-carb, low protein, high-fat ketogenic diet – which has been known for over a century as effective in reducing the frequency of epileptic seizures in children.

“The DHODH gene codes for the enzyme DHODH, which is inhibited by the MS drug teriflunomide,” said Slutsky. “So we decided to test the effect of this drug on brain cells.”

Experimenting with healthy brain cells in the lab, researcher Styr found that teriflunomide significantly inhibits neural activity. Then he made a particularly intriguing discovery – when the drug was left in the dish with the brain cells for a prolonged period of time, the lower level of activity became permanent. This is unlike the effect of most inhibiting substances, that reduce cell activity for a limited time, following which the former level of activity, around the initial set point, is restored.

“These findings led us to suspect that the DHODH gene affects the set point itself,” noted Slutzky. To verify this assumption, Styr now tested the response of the brain cells to various stimuli that increase or reduce neural activity, and found that in fact, once the stimulus is removed, activity returns to the new set point. “This means that, contrary to the common assumption, we do have the ability to change the set point of neuronal activity,” continued Slutsky.

“In other words, a drug targeting the enzyme DHODH can actually ‘correct’ the abnormal set point, bringing it to the normal level. This may well be compared to changing the temperature in an air conditioning thermostat, to set it at a comfortable level.”

“We discovered a new mechanism responsible for regulating brain activity in the hippocampus, which may serve as a basis for the future development of effective drugs for epilepsy,” concluded Slutsky. “Drugs based on the new principle may give hope to the 30% to 40% of epilepsy patients who do not respond to existing treatments, including children with Dravet Syndrome – about 20% of whom die of the illness. We also assume that the same phenomenon – an abnormal set point regulation – may very well be found in neurodegenerative diseases characterized by anomalous levels of activity in various parts of the brain, such as Alzheimer’s and Parkinson’s. In a new study we are now testing the effectiveness of our approach for treating Alzheimer’s disease.”