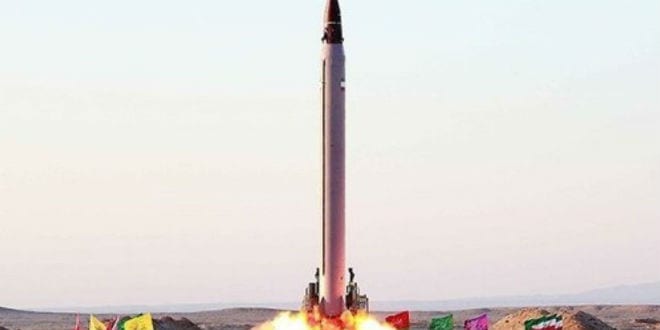 “Iran’s IRGC owns and/or controls a large part of Iran’s economy, and has, in fact, been attacking American troops and our allies for years. The Pentagon recently reported at least 603 Americans were killed in Iraq by Iranian forces,” Jewish Policy Center senior director Shoshana Bryen said.

“Designating it a terrorist organization allows the Trump administration to constrict the travel of its officials and the funds available for its use,” she continued. “It is another way of denying Iran the ability to fund terrorism and war in Syria, Gaza, Iraq and elsewhere—and that is to be applauded.”

The American Israel Public Affairs Committee said the designation “will subject the IRGC to further U.S. sanctions & economic pressure,” and is an important element of the administration’s efforts to “increase financial pressure & raise the costs on the Iranian regime … until it abandons its malign and outlaw behavior,” as stated by the White House.

“To accomplish this objective, the administration will need to further strengthen its enforcement efforts and limit waivers so to drive Iranian oil exports toward zero,” tweeted AIPAC.

“The Islamic Republic is a theocratic dictatorship, and the IRGC is the core source of their power,” said CUFI Action Fund chair Sandra Parker. “From subjugating the Iranian people to supporting terrorists and rogue regimes, the IRGC is the backbone of Tehran’s tyranny.”

“[U.S.] President [Donald] Trump has shown courage in recognizing the realities of the modern Middle East in a way that other world leaders do not,” said American Jewish Congress president Jack Rosen in a statement. “The Iranian government is a threat to the region and to global security at large, and an undeniable source of terrorist violence against civilians. We cannot afford to stay in denial about Iran.”

United Against Nuclear Iran (UANI) said that the move sends a warning not only to the IRGC itself, but also to those who may want to work with the terrorist entity.

“The IRGC’s designation as the terrorists they are should serve as a major warning to any business investing in Iran and will deny Tehran the financial assistance it needs to realize its hegemonic ambitions,” said UANI chairman and former Sen. Joseph I. Lieberman and CEO Ambassador Mark Wallace in a statement.

“Any company entertaining the notion of doing business in Tehran should first recognize that it is at significant risk of transacting with an IRGC front company,” added UANI in the statement. “It is flatly illegal for American and international companies to do business with the IRGC, but corporate compliance officers and country managers are simply powerless to know for sure if their companies are doing business with a reputable Iranian company or one that is secretly operated, managed and even owned by the IRGC.”

Along with echoing the aforementioned sentiments, StandWithUs co-founder and CEO Roz Rothstein said, “This is an acknowledgement of reality.”

Israeli Ambassador to the United Nations Danny Danon tweeted, “Israel thanks the US for another step to recognize Middle East realities: designating the Iranian Revolutionary Guard Corps a terrorist organization! The IRGC is the main exporter of Iran’s regional terrorism. The world should follow this example & increase the pressure on Iran!”

The American Jewish Committee and B’nai B’rith International were also among the Jewish and pro-Israel groups to applaud the move.

U.S. Secretary of State Mike Pompeo announced on Monday that the designation will take effect on April 15, and that doing so is “recognizing a basic reality.”