Home » Pope And Muslim King Usurp the Jewishness of Jerusalem 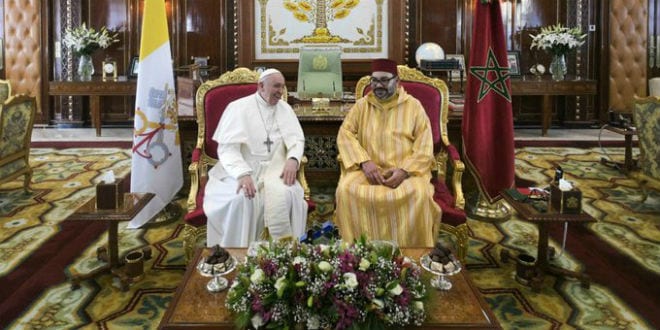 Since ascending to the papacy in 2013, Pope Francis has been working openly to bring Esau and Ishmael together by enhancing Christian-Muslim relations. On the return flight from a recent visit to Morocco, where the official state religion is Islam, the Pope spoke with journalists about his vision for uniting the descendants of Esau and the descendants of Ishmael.

Pope Francis referred to harmony between Christians and Muslims as “a beautiful flower that promises to bear fruit.”

In that interview, which was published last week, Pope Francis shined a light on an alliance between the Muslim country of Morocco and the Vatican regarding the status of Jerusalem. On his first day in the country, Pope Francis and Mohammed VI, King of Morocco, signed a statement about Jerusalem.

In essence, the statement, which references Al-Quds Acharif, the Arabic name for Jerusalem, minimizes the distinctive relationship between Jerusalem and the Jewish people and calls for Jerusalem to become, “the common patrimony of humanity and especially for the followers of the three monotheistic religions, as a place of encounter and as a symbol of peaceful coexistence, where mutual respect and dialogue can be cultivated.”

As is well-known, the Vatican is a supporter of a two-state solution, further diminishing the singular connection between Israel and the Jewish people. The Pope calls for Christians and Muslims to see themselves as equally entitled to Jerusalem. “We are all citizens of Jerusalem, all believers,” he said, referring to Muslims and Christians.

Couched in language of peace, harmony and fraternity, the call for greater cooperation between Christians and Muslims, and this specific statement calling for the universalization of Jerusalem, would effectively strip Jerusalem of its uniquely Jewish identity.

According to Rabbi Yechiel Weitzman author of The Ishmaelite Exile, this alliance of Christians and Muslims was predicted hundreds of years ago and is a sign of the End Times. According to Rabbi Weitzman, “the last stage in the process of Israel’s perfection will be characterized by the alliance between Ishmael and Esav (Esau), an alliance aimed at tormenting the entire world and the Jewish people in particular.”

The ancient Biblical connection between Esau and Ishamael is stated plainly in Genesis. Ishamael became Esau’s father-in-law when Esau married a daughter of Ishmael.

So Esau went to Ishmael and took to wife, in addition to the wives he had, Mahalath the daughter of Ishmael son of Avraham, sister of Nebaioth. Genesis 28:9

Rabbi Weitzman concluded, “At the very outset of history, Ishmael and Esav forged a bond through marriage. And so it shall be at the End of Days. The alliance between them will bring history to its culmination in the redemption.”