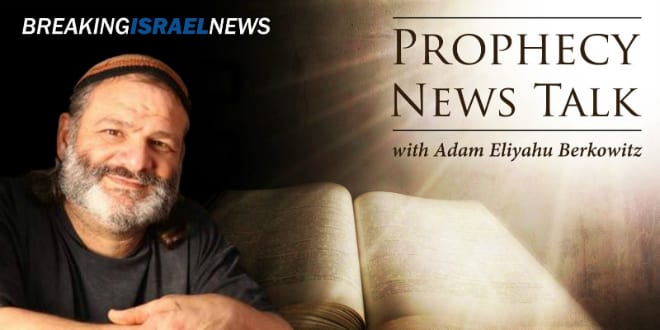 Breaking Israel News reporter Adam Eliyahu Berkowitz has written over 2,000 articles covering every aspect of prophecy as it is unfolding in Israel right now. These subjects range from the appearance of fish in the Dead Sea, the red heifer, preparations for the Third Temple, the Sanhedrin, and many others. Many people claim to be the sources of these stories but the real source, the on-location reporting straight from Israel, is right here in BIN.

Berkowitz is now on video, telling the story behind the story, giving the vital background and context for these important events and issues. Prophecy News Talk will include interviews with the people who are making the news. When a story is breaking, we will take you there.

The first episode sets the record straight on the Red Heifer, a subject many claim to know about though the only person who really knows is a rabbi in Jerusalem. Prophecy News Talk gives you the straight facts on this subject that is so vital to the Third Temple.

Two weeks ago, Rabbi Tuly Weisz joined Berkowitz on the Temple Mount where they took part in a clandestine ceremony intended as a modest step towards reestablishing the Thanksgiving offering.

Last week, Berkowitz and his wife take you on a tour of their town in the Golan while thanking President Trump for making their lives safer.

In three weeks, Berkowitz and Rabbi Weisz will attend a full-dress reenactment of the Passover sacrifice, partaking in meat that was specially prepared by Kohanim in the manner it was prepared in the Temples.

Every week will be a new episode of Prophecy News Talk, bringing you a new video that graphically illustrates the coming redemption.