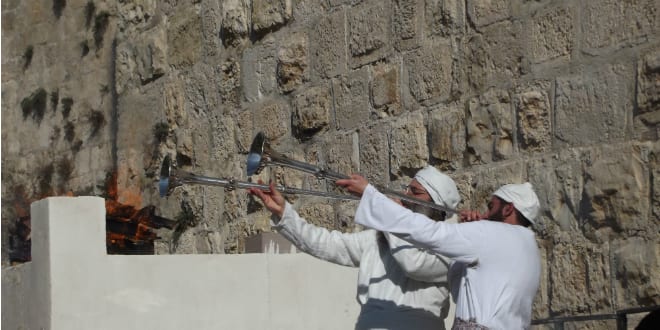 An interview with the spokesman for the Sanhedrin was twisted into an evil conspiracy theory claiming that the Jewish elders are working to bring the Antichrist. A Christian Temple Mount advocate laments the negative message of the video, pointing out that it entirely misses the message that is enormously important to Jews and Christians alike.

A new film by “R$E” or “RoundSaturnsEye”, an independent Christian video company, focused on the Sanhedrin. In the video, the presenter interviews Rabbi Hillel Weiss, spokesman for the Sanhedrin, about the activities of the Sanhedrin including the building of an altar, the red heifer, the minting of commemorative coins, and their plans to institute an Organization of 70 Nations. Rabbi Weiss restated the Sanhedrin’s opinion that Trump has the potential to be comparable to Cyrus as a non-Jewish ruler who is playing a key role in the creation of a Jewish Temple.

The video has garnered an astounding 100,000 views in three days.

R$E (a shortened version of RoundSaturnEye) creates videos for Christian viewers. The organization and its videos are controversial even among Christians, so much so that the man behind the camera remained anonymous. R$E videos describe global conspiracies being perpetrated by Freemasons and the Illuminati as well as the Vatican. The site also ascribes evil intentions and deeds to Donald Trump as well as Hillary Clinton. It is believed that the organization is run by a David Bass, a successful British YouTuber formerly known as Daveyboyz whose videos have garnered over 30 million views.

Perhaps the most explosive part of the interview came after the presenter described his own Christian beliefs. Rabbi Weiss answered directly.

“I am not going to be here the antichrist,” Rabbi Weiss said. “I cannot speak against your belief. And I don’t want to do it. I’m not fighting here for Judaism. We cannot be Christians. It is unallowed. But what will be in the end of times?”

Rabbi Weiss answered this by referring to the Book of Joel.

After that, I will pour out My spirit on all flesh; Your sons and daughters shall prophesy; Your old men shall dream dreams, And your young men shall see visions. Joel 3:1

The presenter continued to press Rabbi Weiss about Jesus as the “logos”, reminding him at the end of the interview that “the sins of both Jew and Gentile have been washed clean by Yeshua.”

The movie ended with a verse from the New Testament appearing on the screen, “Father, forgive them for they know not what they do.”

Captions stating the hope that the Sanhedrin would convert to Christianity appeared, saying that the organization has misapplied the prophecies of Christianity. The video then quoted a prophecy which is one of the sources for the belief held by some Christians that the Third Temple will be the “Temple of the anti-Christ.”

Rabbi Weiss understood from the outset that the movie was not intended to portray the Sanhedrin, or even the Jews, in a positive light.

“I answered in as honest and straightforward a manner as possible,” Rabbi Weiss told Breaking Israel News. “We have our red lines but there is no reason for either side, Jewish or Christian, to be angry or condescending. The Interviewer had his agenda that he was going to push forward no matter what. In the end, whatever we do is in the hand of God.”

“I have met with representatives of the PLO and Hamas. No matter what they think, I have enough truth, enough Torah, to deal with anyone, even if he comes directly from Satan,” Rabbi Weiss said. “The simple truth is that the end is known and we are seeing it take shape now,” Professor Weiss said. “The nations already believe in the Bible and so many people are coming to realize that the source of Torah is Zion.”

“This is getting stronger because many people understand that the solution for the insanity of the fringe liberal culture is the Torah. They say that there are no borders and the Bible describes how God established nations. This raises everyone up, each in his own right, each in his own identity. Each nation has its own unique history that was divinely guided.”

The Sanhedrin has existed for 15 years. It is frequently referred to in the Christian media, usually with respect though sometimes, like in the video, as an evil Jewish conspiracy. However, among the Jews, the Sanhedrin goes largely unacknowledged.

“Jews are terrified to express their own identity,” Rabbi Weiss explained. “They are afraid to reveal their inner truth. They are afraid to show this to the non-Jews. This has always been the case but it is even more so after the Holocaust. The goal of the Enlightenment, the secular movement within Judaism, that is now represented by liberalism, has its roots in the sin of the Golden Calf. It is an attempt to be even more of a goy than the goyim, to hide our unique identity as Jews.”

“Jews are required by the Torah to have a Sanhedrin. Not a Supreme Court or even a Chief Rabbinate. But even the Orthodox Jews in Israel want these things that are not based in the Torah. Ignoring the Torah requirement to have a Sanhedrin is an injustice against the nations who need what the Jews have to offer. The function of the Sanhedrin is to shine the light of the Torah into the world. So many from the nations want this, know that this is what they need to fix their courts,  to fix the environment, to push away the darkness of lies.”

The video was disturbing to Christians as well. Perhaps even more so. As the Christian Relations Director, John Enarson helped organize a conference last year the educated Christians about the importance of the Temple Mount. Enarson is intensely aware of the theological issues Christians face concerning the Third Temple.

“The belief in a false messiah that misleads the world, an anti-Christ, is a fairly mainstream Christian belief and is based in the New Testament. “I see myself and my work connecting Christians to the Temple Mount as working to bring Redemption and not as bringing evil into the world, though I know that the hard times might come.”

“People who speculate in depth and focus on this issue exclusively receive a lot of sensationalistic attention but it is something that most healthy churches are careful with. It is far too much speculation and doesn’t bear fruit. Most mature Christians do not get overly into the topic, like these YouTubers,” Enarson said. “The end times does contain difficult aspects, but they are out of my control. I am called upon to do what I can to bring Redemption without being afraid that the times will get tough for people of faith. Even the Biblical description of the Redemption from Egypt describes a difficult process but it relays the message to not be discouraged.”

“Christians who haven’t dealt with the Jewish roots of their theology and replacement theology tend to have difficulty understanding how to cope with the concept of the Antichrist. They think that as long as there is no Temple, there will be no antichrist, so they are afraid of the Temple. Though Antichrist is a mainstream idea, useful for inspiration, you need to be careful specifying who the destroyer is,” Enarson said.

“The interview was a bit of an ambush. I wish that Rabbi Weiss had met with someone who was objective about what was being said. It was sad that the interviewer was so stuck in his replacement theology, stuck in conflict with Rabbi Weiss, that he missed so much that is valuable to Christians. Of course, Jews and Christians are not going to agree about Jesus but there is enough that we can come together on for mutual benefit.”