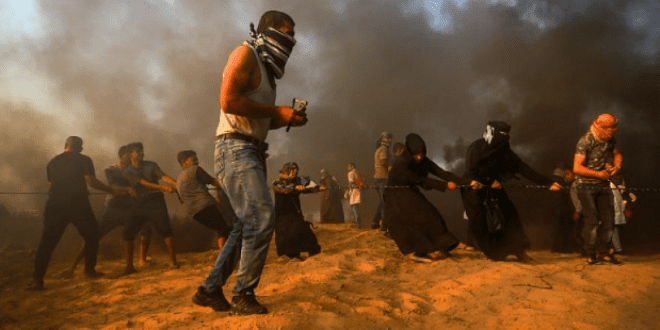 HAPPENING NOW: 40,000 violent rioters in Gaza, some armed with knives, explosives, and grenades, are attempting to breach Israel’s border and reach Israeli families on the other side of the fence. If our soldiers weren’t there, they could. pic.twitter.com/Zy61KkbiYb

The IDF troops responded with crowd dispersal methods including tear gas and rubber bullets. It was reported that the IDF has begun using devices that generate loud noise and spraying blue-colored water at rioters. As per IDF Rules of Engagement, life fire by snipers was used when the security fence was challenged. The Gaza Health Ministry reported that two participants were killed and at least 100 injured in clashes with IDF troops.

The riots were reported to be less violent than usual with Hamas deploying orange-vested personnel to ensure that participants did not approach the fence. IDF spokesman Ronen Manelis said Hamas, the terror group that rules Gaza, had “operated with restraint not seen in the past year.”

#StopHamas
A year of violent Hamas riots in numbers: pic.twitter.com/RLdJ9CmIBJ

There were, nonetheless, attempts at infiltration including two eight-year-old boys who crossed into Israel armed with a knife.

On Saturday night, five rockets were fired at southern Israel from Gaza, landing in open fields and causing no damage. The IDF responded with tank-fire hitting several Hamas military targets in Gaza.

????RIGHT NOW: 5 rockets were launched from Gaza at Israel

Despite the rocket fire and the border violence, Israel reopened the Kerem Shalom crossing and the Erez crossing which had been closed since the rocket fire last week. A fishing ban that has been in place since then was also lifted on Sunday morning. There is currently an informal ceasefire in place between Israel and Hamas brokered by Egypt. Under the Egyptian plan, Israel is to offer economic incentives for Gaza in exchange for calm.

“As far as we are concerned, there is no political or national commitment. We…will continue to [participate] in all national activities and [undertake] all forms of resistance against the occupation in every place on the Palestinian land,”  al-Arouri said.