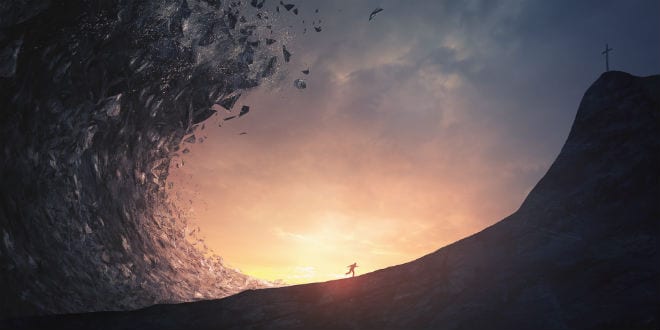 In what may be seen as an ominous case of synchronicity, earthquake and tsunami drills were held all over the world in the last month.

On Wednesday, tens of thousands of residents of Oakland, California were shocked when their cellphones buzzed with a message: there had been no earthquake. Though intended to reassure them that the earthquake warning system was operational, many took it is an ominous reminder that they lived in a region with a history of seismic catastrophes. There are plans to have the system over the entire West Coast of the U.S. within the next few years.

Earthquake drills were also held in other places around the U.S including  Connecticut and Colorado.

On Tuesday, sections of the East Coast, including New Jersey and the Virgin Islands, held tsunami drills. Over the last month, a major drill preparing for earthquakes and tsunamis was held throughout the Philippines for the first time. Over the last two months, drills were held in Indonesia, Dominican Republic, Trinidad and Tobago, and several other nations.

Israel was also part of this informal global seismic drill. Two weeks ago, the Home Front Command held a tsunami exercise in schools throughout the country for the first time. Tsunamis are rare in Israel and the last one, the result of a large earthquake off the coast of Greece, hit the Israeli shores in 1956.

This recent wave of disaster preparation drills was brought to the attention of Breaking Israel News by Yuval Ovadia, whose films on Nibiru have garnered hundreds of thousands of views. Ovadia has been tracking such drills and government preparations as part of his research into the subject of the pre-Messiah astronomical event. He claims that governments around the world are running many more drills to prepare for a growing variety of catastrophes.

“There were always drills but the number is growing by leaps and bounds,” Ovadia told Breaking Israel News. “Everyone, secular and religious, from every country, is talking about the end-of-days. It is clear that there is some knowledge out there driving this. So many governments are preparing for a global crisis, something unprecedented. The governments making these drills know that something big is coming.”

“It is understandable to hold hurricane drills or the like in a specific season,” Ovadia emphasized. “But there is no season for earthquakes. It is remarkable that so many countries decided to hold earthquake drills at the same time.”

Ovadia has a theory to explain the recent trend for governments to hold costly disaster drills.

“Governments want to be prepared but the difficulty with these drills is that they can cause panic,” Ovadia said. “People worry about the end-of-days but the moment they think that it might actually happen everyone panics. In the case of a really big catastrophe, there is nothing the governments or the scientists can do. Having these drills calms people, makes them think that the government is in control.”

A prominent author and educator, who spoke on the condition of anonymity, noted that apocalyptic declarations that used to be the purview of fringe religious are now becoming part of the left-wing secular narrative. As an example, he cited Alexandria Ocasio Cortez, the recently elected Democratic Representative for New York’s 14th congressional district, who was quoted as saying, “ “the world is going to end in 12 years if we don’t address climate change.”

“This is becoming a popular theme for Hollywood,” the expert told Breaking Israel News. “The idea of the world ending is becoming part of the global consciousness. But the religious and the secular relate to the end, personal and collective, differently.”

He quoted a Mishna (Pirkei Avot 2:15) which states, “Repent one day before you die.”

“A brush with death, a tangible reminder of your own mortality, usually changes people for the better” the expert said. “It can bring you closer to God, to doing tshuva, which literally means ‘to return’. The alternative is ‘Eat, drink, and be merry for tomorrow we die’, which takes God out of the picture.”