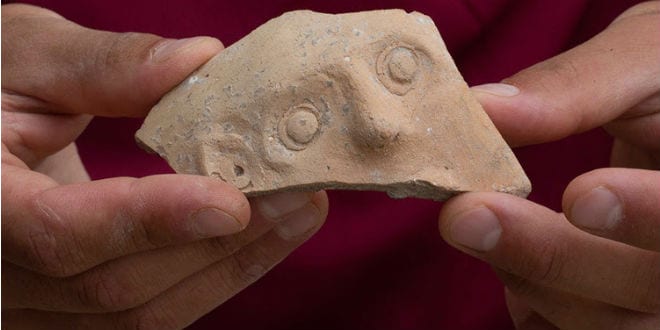 The shard is thought to date from the Persian rule of Jerusalem (fourth and fifth centuries BCE) and was found alongside other less impressive pieces from the same period.

“Pottery from this period was exposed in the past in the City of David, but this is the first time that such a vessel has been found in archaeological excavations in Jerusalem or anywhere in the Judean highlands,” said  Prof. Yuval Gadot of Tel Aviv University and Dr. Yiftah Shalev of the Israel Antiquities Authority.

Several other finds from the time of Persian rule have been found along Israel’s coast.

What makes the find so tantalizing is that relatively little is known about Jerusalem from the Persian period. It is thought that there was a Persian headquarters to the south of the city in the time of the late prophets Ezra and Nehemiah. Jewish tradition maintains that both returned from Babylonian exile to rebuild the city anew – or at least its walls – when Artaxerxes, king of Persia, gave them permission to return to Zion. However, much of what has been found, was recovered in excavations carried out in the City of David.

The shard belongs to a type of object known as a Bes vessel, commonly used during the Persian period, although its origins are thought to be Egyptian. Bes is the protector deity of households, especially mothers, women in childbirth, and children.

His figure adorned the walls of houses and various vessels (pottery and various everyday objects, such as mirrors), or worn as an amulet around the neck. Bes usually appears as a kind of bearded dwarf with a large face, protruding eyes and tongue sticking out when he is wearing a feather hat. This grotesque figure is apparently intended to evoke joy and laughter and drive away the evil spirits.

The discovery of this Bes vessel follows on from a more complete one found at the ongoing rescue excavations taking place at Tel Beit Shemesh, approximately 30 kilometers west, south-west from Jerusalem.