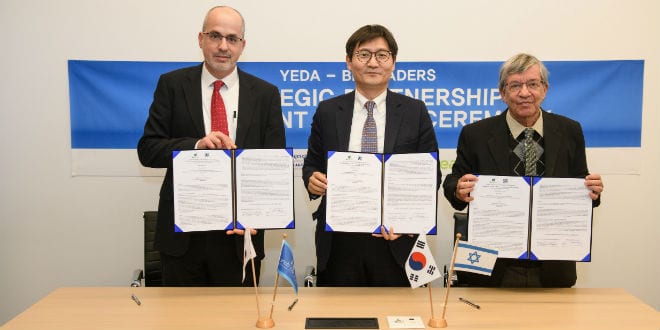 The first investment, of $2 million, is being invested by Yozma Group Asia in On-Sight Medical Inc., which is owned by Yeda, New York University (NYU) and related bodies. The Korean group BioLeaders Corporation, in which Yozma Group Asia is an investor, has committed to investing $10 million in a new spin-out that will develop an anti-cancer therapy developed by Institute scientists.

On-Sight Medical is developing a program to enable untrained users to operate ultrasound equipment and interpret the results. Today’s ultrasound machines are compact and economical, but still require highly trained and experienced technicians to operate them. The developers of the new program hope not only to make up for the lack of qualified ultrasound technicians and radiologists, but also to facilitate the use of ultrasound technology in ambulances, general practitioners’ offices and even in-home care.

This initiative won first place award last year in the Echovation Challenge of the American Society of Echocardiography. The first venue for the application of On-Sight Medical’s technology is in emergency rooms, where waiting for the technician can waste crucial time.

BioLeaders signed a “Letter of Intent” with Yeda for the incorporation of a jointly owned company that will be established in the coming months to develop an anti-cancer drug that will be based on molecular cell biology department researchers of Weizmann Institute Profs. Varda Rotter and Moshe Oren.

The two senior researchers were among the very first to have discovered the function of the p53 protein – which is considered the “guardian of the genome.” This protein is mutated or dysfunctional in over two-thirds of all cancers; such malfunctions can cause the cancer to spread faster. The two researchers recently developed a peptide – a small piece of protein – that can restore proper p53 function and easily enters the cell and binds to the protein. In mice carrying human tumors that were treated with the peptide, the tumors shrank, and in some cases, they disappeared altogether, without causing significant side effects.

The investment is due to be completed in the coming months, and the company is expected to establish operations and recruit staff in its headquarters in the Kiryat Weizmann Science Park in Ness Ziona, near the Weizmann Institute.