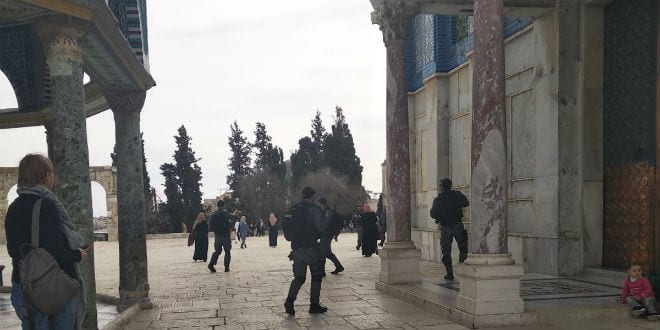 The already-tense situation on the Temple Mount came within a hair’s-breadth of exploding into a full-blown religious war on Tuesday when a Palestinian threw a firebomb at a police post.

A policeman was seriously injured and scuffles broke out between Muslims and police. The police responded by closing all entrances to the site and ordering everyone to leave. At least three Palestinians were arrested in connection with the event.

“Jerusalem Police Commissioner Doron Yadid visited the Temple Mount and held a situational assessment there. He ordered it evacuated and closed in order to conduct searches for other weapons,” the police said in a statement.

Calls have gone out on Palestinian social media for mass protests at the Temple Mount.

The confrontation comes at a time when tensions are high at the Temple Mount. Two weeks ago, Palestinians rioted on the Temple Mount, breaking into an area adjacent to Sha’ar HaRachamim (Gate of Mercy, also known as the Golden Gate) in the Temple Mount compound. The site was locked 16 years ago by court order after it was used as a meeting place for a Hamas-affiliated organization.

The Israeli police have allowed Muslim prayers at the site and have thus far avoided confrontations. The Waqf (Muslim authority) requested permission from the Israeli police to bring in materials to convert the site to a Mosque and their request has not been rejected.

An Israeli delegation traveled to Jordan last Thursday to discuss a solution with the government. In the wake of the failed talks, King Abdullah of Jordan traveled to the U.S. over the weekend to meet with members of Congress.

There have been conflicting reports in the media concerning the negotiations over the site. In an interview with Radio 103FM on Monday Public Security Minister Gilad Erdan said unequivocally that “We will express our sovereignty on the Temple Mount, the holiest place to the Jews. In recent years, there has been a revolution there. The number of Jews who ascend to the site has jumped three and half times from what it was.”

Erdan explained that the police have been working at stopping illegal Palestinian activity at the site, including the  “Mourabitoun” (males) and “Murabitat” (females) hired by the Islamic Movement to harass Jewish visitors to the site.

“Our sovereignty under this government has increased drastically,” Erdan said. “The Jewish presence and the actions of the police are establishing our sovereignty. It is true that what happened at Sha’ar HaRachamim was not good… but there will not be another mosque on the Temple Mount. This is not only my own instruction but also that of the Prime Minister.”

When Israel unified Jerusalem in the 1967 Six-Day War there was one mosque, the silver-domed al-Aqsa Mosque, on the Temple Mount. The Waqf (Muslim authority) has added three mosques since that time in contravention of agreements with the Israeli government and Jordan.

“It is true that they are taking advantage of the situation, and there will certainly be a dilemma on Fridays when thousands of Muslims come to pray at the site,” Erdan said in the interview. “The question is whether this is a reason to begin a religious war. I do not think so. But the moment there is a court decision and political intervention, I am saying that at that moment there will no longer be an additional mosque on the Temple Mount.”

“There are currently only temporary arrangements for Muslim prayer with rugs on the floor. They pray there in an unorganized fashion, as if they were praying in the middle of the street. Nobody can prevent a person from praying anywhere they want.”

“To my great dismay, it is currently forbidden for Jews to pray there,” Erdan said. “God willing, this too will be taken care of in the future.”