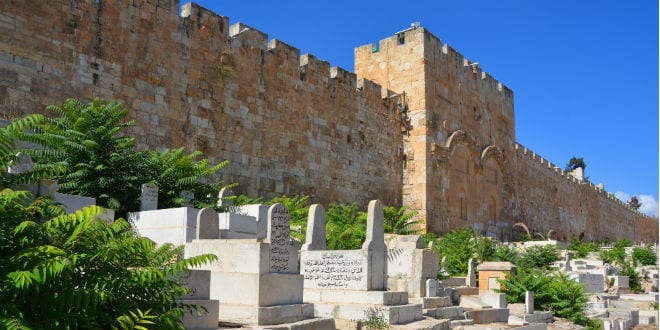 A video released by Hamas media intended to show the brutality of Israeli police showed instead one lone policeman standing strong against in the battle for Judaism’s holiest site. With a firm but polite demeanor, this policeman handles in his daily beat a situation that could explode into a regional conflict.

A video circulated on Hamas-affiliated Quds News Network is being shown as proof that Israeli police disrespected a Mosque on the Temple Mount. The video was presented with the explanation, “An Israeli police officer refuses to take off his boot while entering Bab al-Rahma section of the holy Al-Aqsa Mosque compound in Jerusalem, a step seen as a breach of the sanctity of the holy site.” This statement was intended to incite the anger of Muslim readers.

Two weeks ago, Palestinians rioted at an underground area adjacent to Sha’ar Harachamim (the gate of mercy, also known as the Golden Gate), breaking into it and declaring it a mosque. The Israeli High Court and Prime Minister called for the site to be closed but the police have yet to carry out this order. The Waqf (Muslim authority) requested permission from the police to bring in construction material to renovate the site.  Waqf officials have told media that their request was not denied.

On the way out, the cop says, “Next time, clear away the carpets.”

Dr. Mordechai Kedar, a senior lecturer in the Department of Arabic at Bar-Ilan University, explained the final incomplete statement the Arab made to the policeman.

“According to Islam, Jews are filthy, ” Dr. Kedar explained to Breaking Israel News. “They will certainly wash those carpets.”

It is also important to note that Arabs entering the Temple Mount compound are not checked in any manner though Jews undergo rigorous security checks. A terrorist attack was launched from the Temple Mount in July 2017 in which two Israeli policemen were killed.

In 1967, there was one mosque on the Temple Mount, the silver domed Aqsa Mosque. According to Muslim religious law, it is forbidden to pray towards any spot in Jerusalem so Aqsa Mosque was set up in such a manner that Muslims could pray with their backs towards the site of the Jewish Temples now covered by the gold Dome of the Rock. Now there are two mosques inside the Dome of the Rock.

In the 1990s, Rabbi Mordechai Eliyahu suggested that Solomon’s stables would be a good place to establish a synagogue so the Muslims turned it into a mosque which can accommodate over 10,000 worshippers and it goes largely unused. This newest site is the Gate of Mercy which was closed over a decade ago because it was being used as a meeting place for a Hamas affiliated group.

“This is, after all, a conflict over who rules at the site,” Dr. Kedar said. “And it is not over territory. This is a battle for the Mahdi (Messiah). The Muslims know that according to Jewish tradition, the Messiah will appear first at that location. It is for that reason they established a cemetery just outside the gate: they believe that the Jewish Messiah will not pass over dead bodies. That is, of course, a mistaken understanding of Jewish law.”

According to Jewish law, a dead body is the most restrictive source of ritual impurity. But this is true only for the bodies of Jews. Neither non-Jews nor their bodies can impart ritual impurity. The Muslim cemetery is, therefore, not a hindrance to the Messiah.