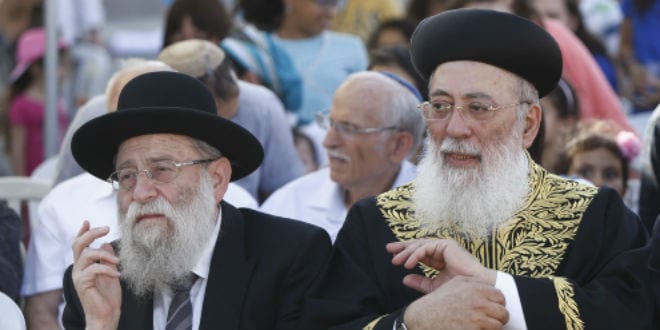 A careful retrospective of current events reveals an interesting sequence: The Chief Rabbis of Jerusalem issued a ruling that prohibits Jews from ascending the Temple and one week later, the Palestinians stormed the  Sha’ar HaRachamim (the Gate of Mercy, also known as the Golden Gate), an area that had been closed off to Jews and Muslims alike for 16 years.

“To our brothers, all of Israel, lovers of Jerusalem, and those who long for the Temple

Lately, there has been an increase in the phenomenon of Jews entering the area of the Temple Mount. This has led to great obstacles and impinges upon the sanctity of the site. The chief rabbis in their time and among them some of the giants in Torah, Rabbi Avraham Isaac Kook, Rabbi Yitzchak Nissim, and the rabbis of Jerusalem in their time, Rabbi Shmuel Salant, Rabbi Tzvi Pesach Frank, Rabbi Betzalel Zolty, Rabbi Shalom Mashash, and Rabbi Yitzchak Kolitz, always warned the public against ascending the Temple Mount and from touching its edges.

We are now joining those who came before us, the rabbis of the holy city of Jerusalem, in warning the public from entering the area of the Temple Mount.

It is understood that the Temple Mount does not belong to non-Jews but is “the Mountain of God” and “the house of the God of Jacob” and neither the Jews or the non-Jews are permitted to enter it, even if we are not currently able to prevent the non-Jews from entering. Thus, we call upon the government and security forces to do everything they can, according to halacha (Torah law) in order to stop the profaning of the holy that is taking place on Mount Zion, as it is called.

We call upon the public to strengthen themselves in calling for the Temple and in learning the pertaining laws, along with observing the necessary awe for the site of our Temple. “It is not for the Temple that you have awe but for the One who commanded it.”

And in the merit of having awe for the holy place may God bring upon us a spirit from above, to raise us up to the high mountain to experience the glory, may it be swiftly and in our days.”

Significantly, the letter was dated the 14th day of Adar, 5778. On the Gregorian calendar that was February 19. Just 10 days later, thousands of Muslims rioted on the Temple Mount and entered the area of Shaar Harachamim, locked by court order 16 years ago after it was used as a meeting place for Hamas-affiliated activities. The Waqf (Muslim authority) turned the underground site into a place for prayer and has requested permission from the Israeli police to begin construction of a mosque on the site.

It is interesting to note that after the rabbinic declaration calling on Jews to refrain from ascending the Temple Mount and the Muslim takeover of the Gate of Mercy, a committee of Temple Mount Organizations called for a mass Jewish presence on the Temple Mount, Jewish prayer, and the construction of a synagogue.

Assaf Fried, spokesman for the Temple Organizations, explained that their call for a Jewish presence on the Temple Mount was not in contravention of Jewish law.

The Jerusalem Chief Rabbis [Stern and Amar] have published a renewed call for Jews to avoid entry into the Temple Mount. “Lately the phenomenon of entry by Jews to the area of the Temple Mount has increased, this causes many [halachic] failings and harms the sanctity of the site” pic.twitter.com/Lx5i1KrbR9

“We do not intend to belittle the rabbis who rule that it is forbidden to go to the Temple Mount,” Fried emphasized to Breaking Israel News. “We respect them greatly. But the issue is still a debate among the rabbinic authorities with opinions in both directions.”

Fried named several rabbis including Rabbi Dov Lior, the former Chief Rabbi of Hebron and Rabbi Zephaniah Drori, Chief Rabbi of Kiryat Shmona. Rabbi Shmuel Eliyahu, the Chief Rabbi of Tsfat (Safed), is continuing the work of his father, Rabbi Mordechai Eliyahu, who called for the building of a synagogue on the Temple Mount.

“There is no doubt that Jewish law permits Jews to ascend if certain conditions are met. There is a doubt about where the boundaries lie for the section that is only permitted to Kohanim (Jewish men of the priestly caste). That is the source of one debate.”

“The essence of the debate is whether it is advisable or beneficial for us to make a presence there. This is less halachic and more political. In that aspect, there are some Jews who feel they have no interest in the Temple Mount. That is not a religious statement but one of perspective.”

The legal aspect of Jewish prayer on the Temple Mount was settled in a Jerusalem Magistrate’s court in 2012 that ruled that “there is room to allow for Jewish prayer on the Temple Mount…in a structured fashion, in a place designated for it.” Despite the court ruling, the police cite security concerns to prohibit non-Muslims from praying at the site.

Rabbi Hillel Weiss, spokesman for the Sanhedrin, noted that there is no Torah source for Jews abandoning the Temple Mount.

“Before and during the Holocaust there were rabbis who ruled that it was forbidden by Torah law for Jews to make Aliyah to Israel,” Rabbi Weiss told Breaking Israel News. “Of course, the rabbis of Jerusalem are, in their great wisdom, making a very fine distinction in a very complicated issue.”

“But we are in very dire times when it is important for Jews to go to the Temple Mount with the intention that this is the time for us to show that this is the place and the time that we are commanded to serve God.”

“By locking the gates to the Jews and allowing the Muslims to break open the gates, by turning their backs on the Temple Mount, Jews are preventing the Temple from being built,” Rabbi Weiss said.