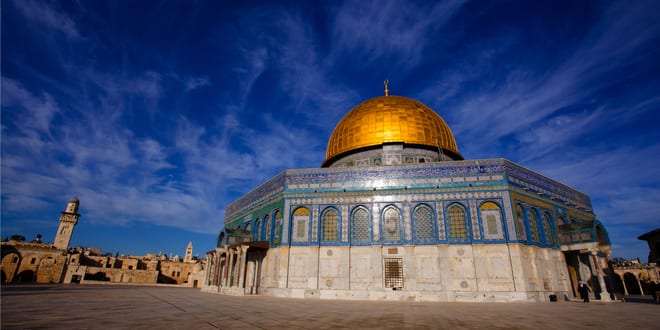 A confrontation between the Israeli police and the Palestinians is expected as more politicians are calling for the closure of a prayer area that was opened in the area of the Sha’ar HaRachamim (the Gate of Mercy, also known as the Golden Gate).

The area was closed 16 years ago by court order after it was used as a meeting place for Hamas-related organizations. Last Friday, Arabs began protesting and broke the lock, entering the site.

Israel’s Prime Minister Benjamin Netanyahu ordered the site closed but the police have yet to carry out that order. Haaretz reported that the Waqf (Muslim authority) director-general Sheikh Azzam al-Hatib requested permission from the police to bring construction materials into Sha’ar HaRachamim for renovations and according to Waqf sources, his request was not denied.

The Waqf has thus far refused to respond to summonses to appear in court and on Monday, an Israeli court ordered the area closed unless the Waqf responds. It is expected that riots will break out on Friday when the area normally fills with Muslim worshipers. On Monday, Agriculture Minister (MK) Uri Ariel (Bayit Yehudi) ascended to the Temple Mount and attempted to enter the Sha’ar Harachamim area but was turned away by police.

“What’s happening at the Gate of Mercy [Golden Gate] is a major breach of the status quo, and our demand is that this matter be returned to its previous status immediately. There is no reason for Netanyahu to agree to this change and certainly not when Muslims are allowed in and Jews are not,” Ariel told the Orthodox news site Kipa.

At an emergency meeting on Sunday night of all the Temple Mount movements concerning the recent Muslim takeover of Sha’ar HaRachamim. Assaf Fried, spokesman for the Temple Organizations, was at the meeting.

“We are not giving up on Sha’ar Harachamim at all,” Fried told Breaking Israel News. “We know that this is entirely the fault of this government but three mosques have been built under Netanyahu. This time there are many more Jews on site so hopefully that will prevent them from turning the site into a mosque. And indeed, the government is taking steps that they never took in the past. They have issued legal restrictions forbidding several Muslim leaders from entering the Temple Mount.”

In order to show the government that the Jews in Israel are firmly committed to the Temple Mount, the group of organizations has called for everyone who objects to the Muslims usurping the site to ascend next Thursday, March 14.

The assembly also called for the government to have the Waqf declared an illegal organization and to have it banned from the Temple Mount.

The participants at the conference also called on Israeli political parties to demand the permission of Jewish prayer on the Temple Mount as a precondition for any coalition agreement after the upcoming Israeli elections.

The groups also called for the establishment of a synagogue on the Temple Mount. This project was first advocated by Rabbi Mordechai Eliyahu, former Sephardi Chief Rabbi of Israel, in the mid-1990s. His son, Rabbi Shmuel Eliyahu, Safed’s chief rabbi, continues to work toward that goal and in 2016, Ashkenazi Chief Rabbi David Lau, generally considered to be moderate in his politics as well as his religious rulings, stunned many when he said in 2016 that there was enough room on the Temple Mount for the addition of both a synagogue and church without infringing on the Muslim sites currently in existence.

In response to Rabbi Eliyahu’s call to make a synagogue in the unused underground area of Solomon’s Stables, the Waqf built the Marwani Mosque at that location capable of accommodating at least 10,000 worshippers. The construction was carried out without permits and in violation of agreements signed with Jordan. When the Waqf constructed  the underground mosque, they worked with heavy machinery, trucking away tons of dirt with total disregard for the archaeological integrity.

Part of the concern over construction at the Sha’ar HaRachamim is for for wooden beams stored at the site. The beams lay in the courtyard outside of the location under a tarpaulin, neglected and ignored. The politically volatile situation does not allow the timbers to be removed but carbon-14 dating carried out in 1984 identified them as Turkish oak and Lebanon cedar ranging in age from 1,340 years to 2,860 years old. The Waqf sold some of the wood in the 1960’s as scrap and in 2012, a group of Jews visiting the Temple Mount photographed some of the wood being burned on site.

The Muslims claim that Israel is attempting to change the status quo on the Temple Mount however, as Ariel indicated, a cursory look at the history of the site since Israel conquered it in 1967 shows that precisely the opposite is taking place. In 1967 there was one functioning mosque on the site; the silver-domed al-Aqsa.

If the Waqf succeeds in establishing a mosque in Sha’ar HaRachamim, this will be the fifth mosque on the Temple Mount. During the 1970’s, the Muslims closed two gates to non-Muslims, restricting their entrance to the Mughrabi Gate. It was also possible for non-Muslims to enter the structures on the site and that too became restricted. The hours for non-Muslim visitation have become more curtailed as time has progressed, though the number of Jews visiting the site has skyrocketed in recent years.

Yaakov Hayman, chairman of the United Temple Movements, sees the current situation as an open confrontation.

“Our holiest site is being trampled by people who have declared themselves as our enemies,” Hayman told Breaking Israel News. “We can’t blame them since they are acting precisely like enemies. This shows where we are spiritually and what we need to do. We need miracles for the Third Temple to arrive but God will only do miracles after he sees that we want it. Jews are finally waking up to the Temple Mount but we need to take it up a few notches.”

Not only is the site significant to the Jews as the site of the two Temples but it is prophesied to play a significant role in the end-of-days.According to Jewish tradition, the Shekhinah (שכינה) (Divine Presence) used to appear through the Eastern Gate and will appear again when the Messiah arrives.

In addition, the Zohar, the seminal work of Jewish mysticism, describes an pre-Messiah war on the Temple Mount involving the descendants if Ishmael who are understood to be the Arabs.