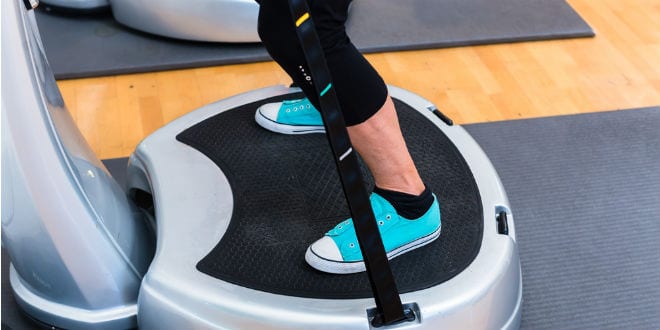 A friend of mine told me about a workout he was doing called “vibration training. He told me that he stands on a vibrating device for 10 to 30 minutes. During this time, the person also does various exercises. He told me that this training has helped him to lose weight significantly. It also strengthened his muscles. I had several questions for him about it, but he couldn’t answer them. I’d like a sports medicine expert to comment.

What are the effects of this exercise on the body? What does vibration therapy contribute and what does it not do? Are there any risks or any damage caused by the technique? Can it hurt the knees, joints or brain? Is the workout really effective? Are there any limitations to exercising (length, intensity of vibration? Are there long-term benefits? N.I, Jerusalem, Israel

In general, not much scientific research has been conducted on whole body vibration training (WBVT). There are more anecdotal reports. It’s a neuromuscular training method that has recently become popular in health and fitness centers, as an additional or substitute method to conventional training and therapy to improve muscle strength and power.

Vibration training activates muscle groups responsible for maintaining posture, thus increasing the total amount of effort carried out by the body. There have been some complaints about pain – but not really damage – caused by it. There is no scientific information about long-term benefits or harm, including to women and children.

As for its efficacy, the scientific literature that exists is still divided. Most studies have been short term and using small groups of people, so it’s hard to say. In addition, the control group did not always do exactly the same workout as those who did vibration training, and there was, of course, no double-blind control group, so it’s difficult to compare and reach conclusions.

Regarding limitations, the coach or the manufacturer of the device usually gives recommendations. The stronger the vibration and the longer the workout, the more likely the benefit.

A study that appeared last year in PLoS One found that 10 weeks of WBVT produced significant weight/fat mass reduction, leg strength improvements as resistance training, and enhanced glucose regulation when added to a low-calorie diet. Only isolated cases of adverse effects were reported. The researchers said it could be a promising adjuvant intervention therapy for obese women, but long-term studies involving larger groups and male participants are needed to prove safety and health benefits.

I am 59 years old, and I live in Nigeria. I have suffered from a stubborn itch in my groin for over 21 years now. I have seen qualified medical practitioner here in Nigeria. I have taken medications, but it goes and comes back after sometimes. There is no redness, and I do not have any chronic illness. Please, I need your expertise advice. R.A., Nigeria

A relatively common cause of itching in the groin – in the absence of a rash – could be the pubic louse (phthiris pubis), also known as the ‘crab’ louse. The louse is very small (perhaps 3 to 4 times the thickness of a hair), greyish, and is very difficult to spot for someone unfamiliar with its appearance. The louse, if found, is usually found anchored to the very base of the hair, and hardly moves, even when scratched. The louse can be plucked off from the hair with difficulty, even with a pair of tweezers. Some minor movement will be seen when it is placed on a white sheet of paper and observed under a magnifying lens. A rash is often absent, but scratching might lead to localized areas of redness, or secondary infection.

Treatment with topical permethrin is usually effective. A single application left no the skin for 10 to 12 hours usually suffices, although a second application may be required after 3 days.

I get prescription medication, Norvasc or amlodipine., from Teva Pharmaceuticals, an Israeli company, for high blood pressure. My pharmacy tells me that the drug is being discontinued. Is this true? I hope that if it is not being sold here anymore, it is not because of the BDS (anti-Israel) movement around the world. D.S., Gladstone, Michigan, US.

I have checked my sources and can see absolutely no notification that either Teva, which makes the generic drug nor Pfizer, which makes the commercial drug, have stopped (even temporarily) the distribution of production of their amlodipine. It is true that sometimes drugs are out of stock temporarily. If they are unavailable in one pharmacy, it is best to call and ask another. Should I be advised of a forthcoming shortage of this product I will tell you.

If you want an Israeli expert to answer your medical questions, write to Breaking Israel News health and science senior reporter Judy Siegel-Itzkovich at judy@israel365.com with your initials, age, gender and place of residence and details of the medical condition, if any.