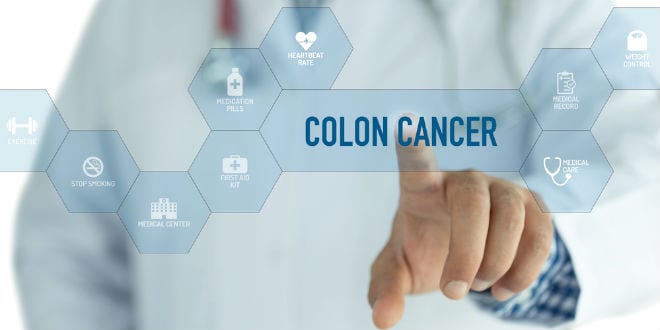 Colorectal cancer – one of the biggest killers in the world – can be prevented by good health habits and can be cured if polyps are detected and removed early with a colonoscopy, in the precancerous stage.

International Colorectal Cancer Awareness Month is marked every year around the world in March. The Israel Cancer Association (ICA) – the voluntary organization, not subsidized by the government that educates the public about cancer risks and provides services for cancer patients – has released advice and statistics about colorectal cancer.

ICA director-general Miri Ziv recommends paying attention to symptoms and changes in the body that may indicate colorectal cancer. Among the early signs of the cancer are a change in bowel habits such as diarrhea or constipation that lasts for more than a few days, mucous in the stool, rectal bleeding or blood in the stool, abdominal pain, iron-deficiency anemia or unexplained weight loss.

If you suffer from just one of the signs, contact your general practitioner, who will consider referring you for a colonoscopy in which the large intestine (colon) and rectum are viewed with a tiny camera. If precancerous polyps are found, they can be pinched and removed during the procedure.

A total of 2,998 Israelis were diagnosed with colorectal cancer in 2016 (the latest year for which there are statistics), and of those, 1,296 died of the malignancy. The rate of diagnosis of colorectal cancer in Israel puts this country 35th among 36 OECD (advanced) countries, while the death rate from it puts it in a welcome 31st place.

According to the Health Ministry, there has been a decline in the prevalence of colorectal cancer in Israel, thanks to preventive measures and early detection by colonoscopy. The rate of Israelis whose colorectal growth was detected early rose from 17% to 30% in recent years thanks to intensified efforts by the country’s four health maintenance organizations to get their members tested and monitored.

The main risk factors for colorectal cancer are age, family history and a previous intestinal tumor or inflammatory bowel disease, genetic mutations and lifestyle such as lack of exercise or failure to eat a fiber-rich diet, concluded Prof. Lital Keinan-Boker, deputy director of the Israel Center for Disease Control at the Health Ministry.

But new research suggests ways of reducing the risk. A Chinese study published in the Asia-Pacific Journal of Clinical Oncology last month suggests that eating onions, garlic, leeks, green onions, chives and related The study was conducted between 2009 and 2011 and included 833 north Chinese residents aged 18 and over treated in one of three hospitals in the region due to colon cancer. The control group included 833 healthy participants. The encouraging findings were similar for men and women.

A new US study finds that consuming calcium, magnesium and other minerals, preferably from leafy green vegetables and other healthful food, can reduce the risk by 25% in post- menopausal women. The researchers looked at the health records of 35,221 post-menopausal women who had not been diagnosed with colorectal cancer over several years. By the end of 2004, five follow-up follow-up sessions were performed, and 1,731 women had colorectal cancer by the end of the follow-up years.

The study suggests that high intake of calcium, magnesium, manganese, zinc, selenium, potassium and iodine combined with a low consumption of iron, copper, phosphorus and sodium has the potential to reduce the risk of colorectal cancer middle-aged and older women. The study was published in the journal Cancer Epidemiology, Biomarkers & Prevention in the February 2019 edition.

In addition, not smoking tobacco, not drinking excessive amounts of alcohol, while exercising and keeping a healthful diet have an important impact on reducing the risk of developing tumors in the large intestine. The lack of physical activity as well as high body-mass index raise the risk of such cancers.