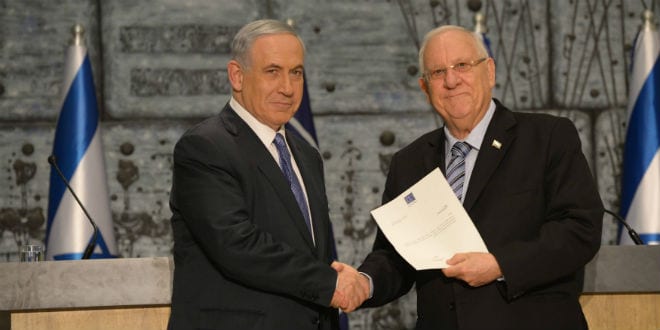 The new center-left list under Israel Resilience leader Benny Gantz and Yesh Atid leader Yair Lapid would win 36 seats if the Knesset election were held today, compared to 31 seats for the Likud under Prime Minister Benjamin Netanyahu, according to a new poll from Israel Hayom and i24NEWS conducted after the party lists for the April 9 election were locked down last Thursday.

The poll projected eight seats for Labor and seven seats for Meretz, which appears to indicate that Labor leader Avi Gabbay made the right call by refusing to merge with Meretz. Previous polls predicted that a joint Labor-Meretz list would win approximately 12 seats.

In total, the poll predicted 62 seats for the right and the ultra-Orthodox parties, despite the fact that a few of the smaller right-wing parties that did not form mergers are unlikely to pass the minimum threshold.

Even if the center-left were to win the election, Gantz and Lapid would still need 61 seats to form a coalition. Current polls show that to be impossible, since the Blue and White list, Labor, Meretz and the Arab parties add up to only 58 projected seats given the parties’ current standings in the polls.

However, if right-wing voters cast ballots for Gantz, the center-left could form a government.

United Torah Judaism and Shas would win seven seats each.

The Arab parties Ta’al and Hadash, which split from the Joint Arab List, would win seven seats as a joint ticket, whereas the Arab Balad Party would not pass the minimum threshold.