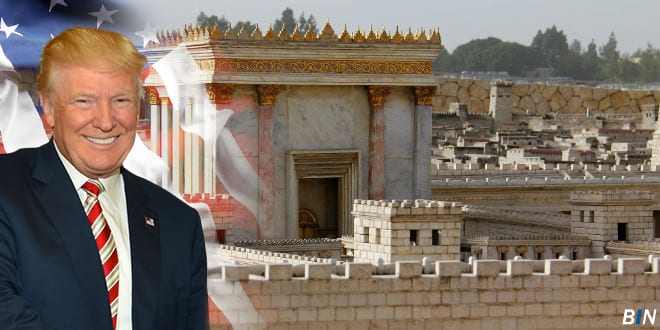 A rabbinic expert in mysticism presented esoteric clues to Trump’s connection to other, more Biblical redheads prophesied to return in the days preceding Messiah.

In an article with the unlikely title ‘Why does the U.S. President Trump Eat a Lot of Red Meat and Drink Coca Cola”, Rabbi Yekutiel Fish revealed Kabbalistic clues to the role the current White House administration will play in bringing the Messiah.

As a preface, it should be noted that during his campaign for the presidency,  there was much speculation among rabbis in Israel as to the spiritual roots of the candidates. Breaking Israel News published opinions that stated the gematria (Hebrew numerology) of Donald Trump’s name in Hebrew (דונלד טראמפ) equals 424 – which is also the numerical equivalent of ‘Moshiach for the House of David’ (משיח בן דוד). Trump was often compared to Persian King Cyrus who facilitated the construction of the Second Temple in Jerusalem. Cyrus was the only non-Jewish leader to be referred to in the Bible as Moshiach, literally ‘His anointed one’. The word for ‘anointed one’ in Hebrew is ‘Moshiach’ (משיח).

Thus said Hashem to Cyrus, His anointed one— Whose right hand He has grasped, treading down nations before him, ungirding the loins of kings, opening doors before him and letting no gate stay shut. Isaiah 45:1

In his recent post on his Hebrew-language Torah newsletter titled “Sod HaChashmal”, Rabbi Fish gathered references connecting Donald Trump to Biblical Esau’s archetypal role in the Messianic process. Rabbi Fish quoted Rabbi Yosef Sheinberg as saying that the gematria of “הַנָּשִׂיא דוֹנַלְד טְראמְפְּ” (the President Donald Trump) equals 790, which is also the numerological value of the phrase “הוּא גִלְגּוּל שֶׁל עֵשׂו” (he is the incarnation of Esau).

Rabbi Fish also noted that just as Esau was noted for his red hair and skin, President Trump is also identified in that manner. Rabbi Fish explained that the role of Esau in the end-of-days is quite complicated.

‘King David, the template for the Messiah, was also described as a redhead,” Rabbi fish pointed out. “We know that when the Messiah, the aspect of King David, comes into the world, Esau will return as his parallel or counterpoint. Esau can become the head of Gog, or it could be Nimrod that leads the war against Israel.”

“Trump is a man given to the pleasures of this world; meat and Coca Cola, luxuries and money. It is undeniable that he has great power in the world. Trump could have been Israel’s arch nemesis or our brother.”

“The same people who cheered him on a few years ago are precisely the people who are most against him today. When Trump arose and made clear that he was going to be for Israel, to help the Moshiach come into the world, that caused a huge turmoil in the world specifically among his former friends,” Rabbi Fish explained. “He is, after all, just a president who will be gone in a few years. But people who fear the Moshiach went into a panic. They can tell that the day of reckoning is very near.”

Rabbi Fish brought other clues to how current politics fit into the end-of-days. In the name of Rabbi Avraham Agassi Rabbi Fish brought an esoteric teaching pertaining to Jared Kushner, Trump’s Orthodox Jewish son-in-law and adviser. According to Rabbi Agassi, Kushner is connected to Biblical Judah. The rabbi noted that Jared in Hebrew (יֶרֶד) means “descend” hinting at the descendant of Judah who will be the Messiah. According to Rabbi Fish, a hint to an aspect of Judah’s life described in the Bible. Judah left his brothers, “went down” in Hebrew, in order to meet and marry a woman.

According to Jewish tradition, Shua was a pseudonym for Esau.The Midrash Talpiot, a compilation of homiletic teachings compiled in the 17th century, explained that since Esau was evil, the letters of his name (עֵשָׂו) were rearranged to spell Shua (שׁוּעַ).  Bat-Shuah (the daughter of Shua) is also an alternative name for Bat-Sheva, wife of Judah’s descendant, King David.

In a previous article, Breaking Israel News wrote an explanation of the numerology based on Obama.  The Gematria of his full name, Barack Hussein Obama (בּרק חוסיין אובּאמה), is 501, equal to the Gematria of the word יִּשְׁמְעֵאלִּים (Ishmaelites), who are considered by most Biblical commentaries to represent Arabs and the world of Islam. The Gematria of Barack Obama, without his middle name (בּרק אובּאמה), is 357, the same value as קוראן (Koran), the holy book of the Ishmaelites. Spelled as בּרק אובּמה, Barack Obama’s name numerically equals “Pharoah” (פרעה). Strangely enough, the gematria of “Michelle” (מישל), Obama’s wife, equals 380, the same as Egypt (מצרים).

“The rule of Obama, his influence, could have gone on much longer,” Rabbi Fish said. “But just as a new Pharoah arose and the old one was forgotten, paving the way for geula (redemption), once Obama left office his legacy disappeared.”