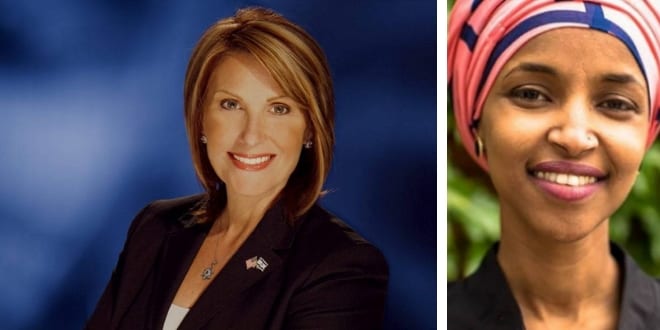 Laurie Cardoza-Moore, President of Proclaiming Justice to The Nations is launching a nationwide campaign to create enough pressure to demand Ilhan Omar’s immediate resignation from Congress.

The move, which includes a petition called “The Million Signature March,” follows at least two separate occasions when Rep. Omar’s tweets have been interpreted as wildly antisemitic. Cardoza-Moore who serves as a United Nations Special Envoy for the World Council of Independent Christian Churches (WCICC) which represents over 44 million congregants worldwide and whose “Focus On Israel” television program reaches a global audience of over a billion, has begun to increase pressure upon Omar to stand down.

Cardoza-Moore laid out specific charges against Omar, despite an apology that the Democratic Representative from Minnesota was supposedly forced to give, under pressure from the Democratic Party leadership – including Speaker of the House, Nancy Pelosi.

“Ilhan Omar tricked her electorate into voting for her by lying about her support for Israel,” Cardoza-Moore maintained. “She supports the destruction of the State of Israel and is a virulent antisemite with close connections to the Muslim Brotherhood. As American patriots and people of faith, we cannot afford to standby as she continues to sow religious hatred. Proclaiming Justice to The Nations has launched a nationwide petition demanding her immediate resignation. We will continue to act as a firewall around the Jewish people, whenever Jew hatred arises, because their God is our God and their values are our values.”

Omar’s animus toward Israel and Jews has a long germination period. She tweeted in 2012, during the IDF’s Operation Pillar of Defense in Gaza, that “Israel had hypnotized the world.”

Her latest remarks two weeks ago, referred to an ancient anti-Jewish prejudice about their control of money – particularly in reference to AIPAC and its alleged hold over members of Congress.