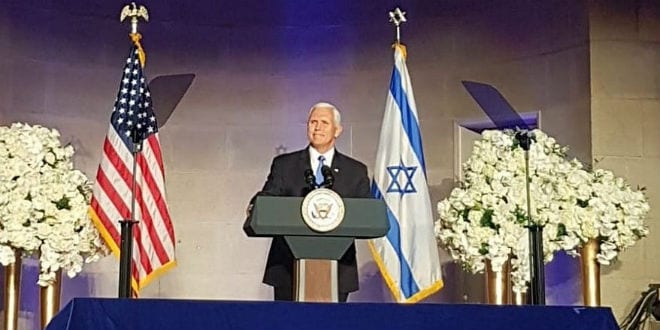 On Thursday, Vice President Mike Pence addressed approximately 60 international leaders on the final day of the Warsaw Summit in Poland, emphasizing the imperative for nations to withdraw from the nuclear deal and for others to recognize the global threat posed by Iran.

Pence called Iran the “greatest threat to peace and security” in the Middle East. President Trump has called for with Iran reinstating sanctions against the rogue nation. Participants in the summit also discussed the Islamic State (ISIS) and the conflicts in Yemen and Syria.

In his address, Pence described the Joint Comprehensive Plan of Action (JCPOA) with Iran  negotiated by the Obama administration and signed in 2015 as “disastrous” and a “devil’s bargain with our common enemy.”

“The so-called Joint Comprehensive Plan of Action did not prevent Iran from obtaining a nuclear weapon it merely delayed the day when that vile regime would gain access to the world’s deadliest weapons.”

Pence explained that even though Iran has complied with the terms of the JCPOA, the U.S. still objected.

“Compliance is not the issue,” Pence said. “The deal is the issue.”

Pence noted the consensus of opinion at the summit was that the JCPOA had ushered in an era of increased Iranian aggressiveness. He described how President Trump was leading an initiative to reinstate economic sanctions against Iran “that should never have been lifted in the first place.” He listed several cases on international cooperation on this front.

He noted that some of the “leading European partners have not been as cooperative,” specifically naming Germany, France, Great Britain, and the European Union who were conspicuously absent from the summit. Pence made a heartfelt promise that if the gathered nations stood with the U.S. on this issue, the U.S. will stand with them in the future.

At this point in his speech, Pence made a surprising segue.

“It’s remarkable to think that more than 4,000 years ago, a man was called to leave his home in Ur of the Chaldeans and make a long journey north,” Pence said to the gathering of world leaders. “He wore no crown. He commanded no armies. He performed no miracles. He delivered no prophecies. Yet, to him, was promised in those ancient words, descendants as numerous as the stars in the sky.”

“Today, Jews, Christians and Muslims, more than half the world’s population, and nearly all the people of the Middle East claim Abraham as their forefather in faith. And so he is.”

“I believe on that foundation of that Abrahamic tradition, we can find a firm foundation for a brighter future for all the people and all the faiths of the middle east. It doesn’t just simply have to be a part of our imagination. It is actually happening as we speak.”

“We need to look no further than the old city of Jerusalem as an example of what could be true for the region as a whole. There we see the followers of three great religions in constant contact with one another. We see each faith come together in new and renewed ways every day. “

“At Haram al-Sharif (The Dome of the Rock) we see young Muslims with their heads bowed in prayer. AT the Church of the Sepulcher we see a Christian child receiving her baptism. At the Western Wall, we see a young Jewish boy being Bar Mitzvahed.”

“What we see there, we can achieve all across the Middle East.”

“That is the vision that President Trump has. That is the hope and aspiration of peace-loving people in our nation and around the world.”

“I think we would do well to look to a promise that was made to that man I referred to who made that journey so many centuries ago. It was a promise in those ancient words I will surely bless you. I believe with all my heart that we can claim that blessing anew for all the people of this region, for ourselves and our posterity. I believe God will surely bless us with peace. So let us begin.”

Russia was not present at the Warsaw Summit and chose instead to hold a simultaneous summit in Sochi on the Black Sea with Iranian President Hassan Rohani and Turkish President Recep Tayyip Erdogan.