Antisemitism is a Battle ‘Humanity Must Fight Together’

Home » Antisemitism is a Battle ‘Humanity Must Fight Together’ 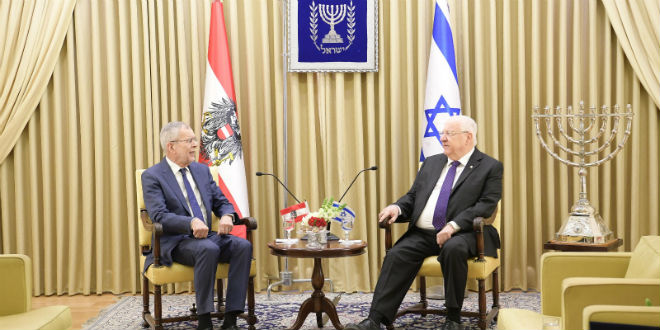 The president of Austria on Monday admitted his country’s responsibility in the Holocaust during an official state visit.

“Austria bears shared responsibility for the Holocaust,” said President Van der Bellen. “Many Austrian citizens took part, and we bow our heads in memory of the victims in humility and respect. We admitted our shared responsibility too late and that caused problems in our relations at the beginning.”

The president’s visit was marked by an air of positivity, which included an official meeting with Israeli President Reuven Rivlin, a state dinner at the President’s House and a tour of Yad Vashem.

During the tour, Rivlin made clear that “antisemitism is not disappearing. It is raising its head across the world, and even more so in the last year.

“In your own country, there were some 50 antisemitic incidents last year, some of which are being investigated by the police,” he continued.

Yet, he said that it was Austria that led European support for the EU’s statement against antisemitism. This statement stresses the importance of education for Holocaust memory, and calls on governments to take steps to ensure the safety of their Jewish communities, organisations and citizens. It would be a tragedy if Jews were afraid to express their beliefs in Europe. The statement also calls on other states to adopt the new definition, in full, of antisemitism issued by the International Holocaust Remembrance Alliance (IHRA). Austria and 11 other European countries have already done so.

“The way to stamp out antisemitism has two elements – taking responsibility for the past and an uncompromising fight against any hint or act of antisemitism or xenophobia of any kind,” Rivlin said.

The visit and the comments are strikingly relevant less than two weeks after International Holocaust Awareness day and amid multiple reports of escalating levels of antisemitism.

A report published by the Ministry of Diaspora Affairs on January 27, for example, revealed record high levels of antisemitism on the streets and online in 2018. Likewise, the year saw the highest number of Jews murdered in antisemitic attacks since the 1992 and 1995 attacks on the Argentinian Jewish community. Thirteen Jews were killed last year in three separate incidents worldwide.

“The campaign against antisemitism is not a Jewish issue,” Rivlin concluded. “This is a battle that all humanity must fight, together.”