Message From the Sanhedrin on International Holocaust Remembrance Day

Home » Message From the Sanhedrin on International Holocaust Remembrance Day 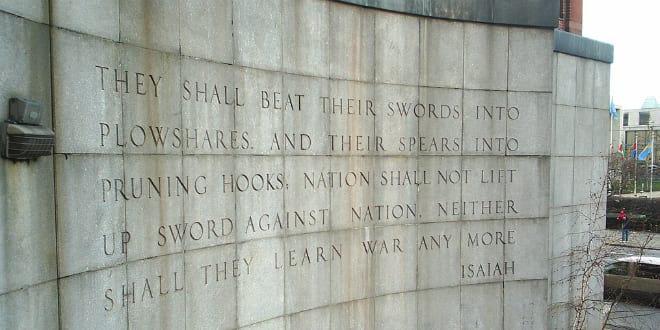 The nascent Sanhedrin issued a statement regarding International Holocaust Remembrance Day, calling on the nations of the world to replace the world’s worst advocate of anti-Semitism: the United Nations.

The statement, signed by the members of the Sanhedrin, stated the following:

The subject of the Holocaust touches upon a deep scar in the collective human psyche,  relating to a time when much of humanity acted in a schizophrenic manner.
Rather than act as a means for unity and healing, the United Nations has become the world’s central organization for the dissemination of anti-Semitism. It is unthinkable but the organization that reacted to the horrors of World War II by aiding in the creation of the modern State of Israel is now actively denying the historic connection between the Jews and their homeland, given to them by God as recorded in the Bible. It is the birthright of the Jewish people to be a Holy Nation, a separate nation. rejection of the state of all its citizens at best and the destruction of Israel as a state and a people in history. It is sadly ironic that it was the UN that established International Holocaust Day just a few years ago.

The UN is now advocating euthanasia and abortion as human rights. This is a refutation of the Noahide laws incumbent upon all humanity which forbids murder.  In essence, this is identical to the Germans who dealt in large scale euthanasia also for what they believed was the good of humanity, and is in direct contrast to the basic tenet of each human life being equal in the eyes of God. One of the banners of the enlightened nations in Europe, who are currently acting towards the own existential demise as well as the demise of their culture and their religion, is the abolition of sovereignty and rule for the benefit of refugees.  They believe in the abolition of borders, flooding the world with refugees and destroying countries and cultures. They do so for what they call “humanistic values”:

The Sanhedrin Court calls out from Mount Zion, calling upon the seventy nations to join together to refute this. To do so, they need to strengthen themselves in the Bible which emanates from Mount Zion. The nations are called to take their place, to accompany God,  according to the acceptance of the laws of the Bible and its spirit as the spirit of international law.

To make this initiative known and real in the minds of men, the Sanhedrin has issued a coin to establish this call for the nations to gather at Zion. The coin features Nikki Hailey, the former United States Ambassador to the United Nations, who stood firm throughout her term as a beacon of truth until she resigned from the United Nations.

The Sanhedrin recommends that the nations establish a new organization of ‘seventy nations‘ according to the spirit of the Bible. This organization will accept the uniqueness of the Jewish people based on our Biblical role as a Light Unto the Nations and not identify the Jewish people solely on the basis of the memory of the Holocaust. This ‘victim narrative’ serves no purpose for the Jews as a people. Though remorse and contrition are admirable and worthy acts for the individual, it is ultimately destructive to identify an entire nation as the eternal victim.

The proof of this is that the United Nations, despite recognizing the genocide perpetrated against the Jews nonetheless supports an agreement with Iran that enables them to continue in the production of weapons of mass destruction with the sole purpose of destroying the Jewish people.

This call to join together for the sake of universal preservation and the good of all humanity has already been answered, signed by official representatives of the states of Guatemala, Honduras and Mexico. We call upon every state and every ethnic community and every individual regardless of religion, race or sex to sign this letter on the Sanhedrin website.