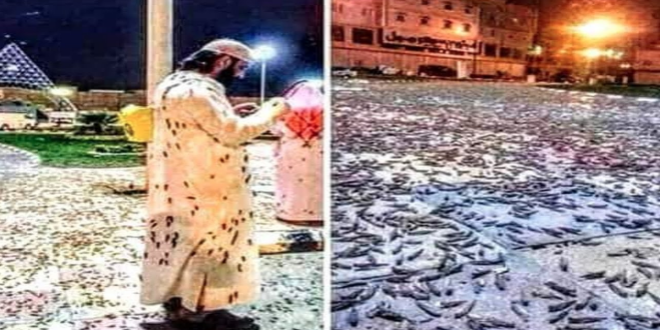 Saudi Arabia, in particular the location of Islam’s holiest sites, Mecca, has recently been inundated by swarms of locusts, crickets and cockroaches.

Social media users have posted images and uploaded several videos of swarms of locust infesting the Great Mosque of Mecca, the holiest in all of Islam. It is the focus of the hajj, the pilgrimage, which draws millions of Muslims a year to Saudi Arabia.

According to a report on Al-Araby, Mecca’s municipal authorities announced earlier in the week that specialized teams of sanitation workers have been tasked to deal with the infestation.

“We have harnessed all efforts available to speed up the eradication of the insects in the interest of the safety and comfort of guests to God’s house,” said the statement.

In a report on reliefweb.int, a Desert Locust Bulletin from December said that “Favorable ecological conditions and extensive breeding caused a Desert Locust outbreak to develop in the winter breeding areas along the Red Sea coast in Sudan and Eritrea during December.”

The report suggested that the breeding in southeast Egypt, on the Red Sea coast in Saudi Arabia and Oman was smaller than that which plagued Sudan and Eritrea. The swarm was helped by good rains following Cyclone Luban, a very severe tropical storm that affected Yemen, Somalia and Oman in particular, in October 2018.

Is it simply irony that in the weekly Torah portion Jews read about the final five plagues – boils, fiery hail, locusts, darkness and death of first-born males – that God sent to afflict Pharaoh and the Egyptians, a swarm of locusts attacks Islam’s holiest mosque?

A locust will eat its weight in food every day and swarms can strip entire regions bare but, for some (like the Russian fishermen), they are considered a mixed blessing . Locusts are, in fact, edible and considered a delicacy in some countries. While the consumption of most insects is forbidden under kosher laws, the Talmud identifies four species of locust that are kosher and permitted to be eaten by Jews. Since the identity of those species is in dispute, most Jews refrain from indulging.